Congress can pass legislation this year that would make a significant difference in the lives of Americans. Despite the perception of partisan gridlock, broad support exists for many important domestic economic policy reforms. These policies are ambitious but achievable, and, if adopted, would promote economic growth, empower individuals, and reduce government waste.

While there are numerous major economic policy reforms that Congress should undertake in the 114th Congress, some reforms have a much better chance than others of being enacted immediately. While nothing is easy to pass in Congress, these reforms are “low-hanging fruit.” A common thread running through these reforms is that they need not be controversial in nature, and significant support may already exist. There is enough common ground to achieve immediate tangible results. Congress should seize this unique opportunity.

Tax reform is essential for improving economic growth and expanding opportunity for Americans struggling to make ends meet in the slow-to-recover economy. It is one of the most important policy issues, and the new Congress should devote considerable time and effort toward achieving tax reform. 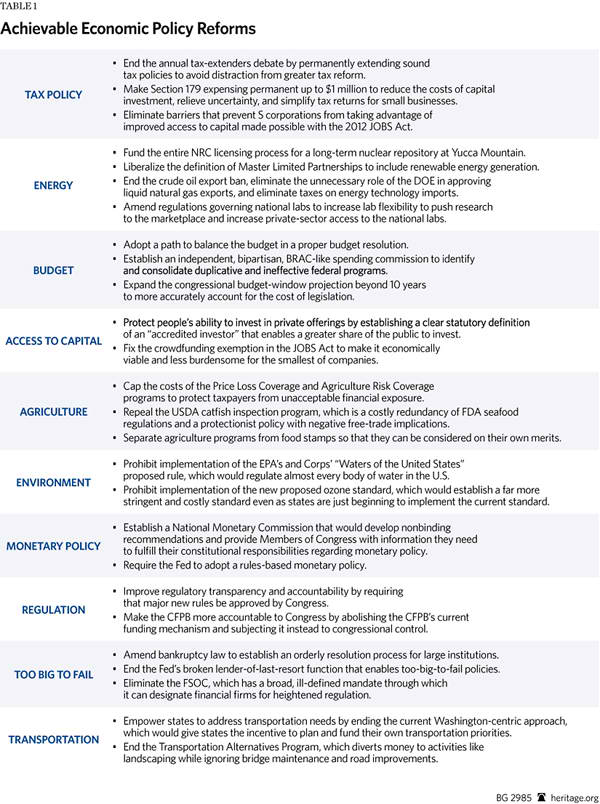 Eliminating politics and arbitrary restrictions on energy markets would foster innovation as companies face more competition and meet challenges to retain or expand their market share. Americans would benefit from lower prices, increased economic activity, more ingenuity in energy markets, higher-quality products at competitive prices, and an improving standard of living. Congress should:

Congress has an opportunity to rein in growing spending and debt. It should seize that opportunity. Last year, lawmakers waived the debt limit until March 16, 2015, and then remained largely silent about the economic dangers posed by excessive federal spending and debt. The new Congress needs to address these issues with the seriousness they deserve.

In a joint op-ed published the day after the elections in The Wall Street Journal, House Speaker John Boehner (R–OH) and Senate Majority Leader Mitch McConnell (R–KY) promised to address “a national debt that has Americans stealing from their children and grandchildren, robbing them of benefits that they will never see and leaving them with burdens that will be nearly impossible to repay.”[7] The congressional budget process affords them just this opportunity. Congress should:

Entrepreneurship in America is in decline. Business exits now exceed new business formations.[16] Many other indicia of entrepreneurial health also indicate that the government has placed an unprecedented burden on small and start-up businesses. Accordingly, job creation, productivity improvements, and welfare-enhancing innovation have slowed down.

Among the most important factors impeding entrepreneurship are securities laws and, to a lesser extent, banking laws and practices that restrict entrepreneurs’ access to the capital needed to launch or expand their businesses.[17] After all, without capital to launch a business in the first place, other impediments to entrepreneurial success are a moot point.

It is quite clear that existing regulations, usually imposed in the name of investor protection, go beyond those necessary to deter fraud and achieve reasonable, limited, and scaled disclosure for small firms. Existing rules seriously impede the ability of entrepreneurial firms to raise the capital they need to start, to grow, to innovate, and to create new products and jobs.

The 2012 JOBS Act was a bipartisan achievement of consequence.[19] It will improve the regulatory environment for entrepreneurial capital formation. Whether its impact is small or significant is largely up to the SEC. The rules proposed (but not yet finalized) by the SEC are cause for serious concern.[20]

While the JOBS Act represents progress, a great deal more needs to be done. Some of the most important things that Congress could do to remove impediments to entrepreneurial capital formation are:

Government interventionist polices are still the norm in agriculture, distorting decisions made by farmers and stunting innovation and reducing consumer choices. Farmers, like other business leaders, can effectively manage risk and compete without special handouts. While major systemic change may not be feasible right away, Congress can address three straightforward issues that would be good first steps:

Most environmental policymaking today is being done by executive agency actions, including regulation. Congress has delegated too much power to executive agencies to manage the environment and human health. As a result, costly regulations are developed by unelected and unaccountable bureaucrats instead of by the American people’s representatives in Congress. There are two major and time-sensitive regulatory issues that Congress should address early in the 114th Congress.

More than five years after the 2008 financial crisis, the Federal Reserve’s proper role is still the subject of much debate. Many of the Fed’s activities—such as emergency lending and expansive asset purchases—were based on the premise that failing to undertake them would have caused a calamity on the scale of the Great Depression. Even after financial markets stabilized, the Fed expanded its activities because the recovery was slow to materialize. These ongoing monetary policies have come under fire for being ineffective and for increasing the likelihood of future inflation because they were so aggressive.[43] Congress should adopt two complementary policy solutions:

In his January 2014 State of the Union address, President Obama vowed to wield his executive powers when faced with congressional resistance to his legislative agenda: “America does not stand still—and neither will I,” he said. “So wherever and whenever I can take steps without legislation…that’s what I am going to do.”[46] This provocative declaration was startling in its bluntness, but it was hardly a new policy.

During its first five years, the Obama Administration aggressively exploited regulation to get its way. Issuing 157 new major rules at a cost to Americans approaching $73 billion annually, this Administration is very likely the most regulatory in U.S. history.[47] The new Congress should reduce this flood of regulation, ensuring that each new rule is necessary and its costs minimized:

Too Big to Fail

The financial crisis of 2008 led to the “Great Recession” from which the nation is still recovering. Despite the slow economic rebound, and in the face of contradictory historical evidence, many critics still claim that a lack of regulation caused the crisis. If anything, though, the constant expansion of the massive federal regulatory framework contributed to the crisis. It follows that most of the so-called solutions offered since then—virtually all of which involved more regulation—will fail to make financial markets any safer. Congress should:

People working with private businesses and state and local authorities are best able to figure out how to get themselves and their property and goods from point A to point B. The goal of federal surface transportation policy should be only to fill voids that neither the private sector nor state or local government can manage. Congress should put a stop to current federal earmarks, mandates, and funding diversions to low-value projects that only hamstring efficient state and local deployment of resources, in order to meet the commuters’ demands for reduced congestion, enhanced mobility, and improved safety: 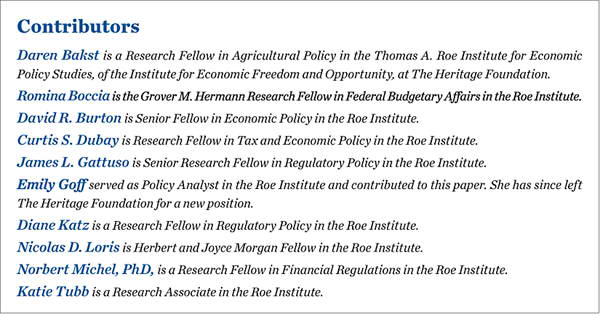 [2] U.S. Department of Energy, “Recommendation by the Secretary of Energy Regarding the Suitability of the Yucca Mountain Site for a Repository Under the Nuclear Waste Policy Act of 1982,” February 2002, p. 6, http://energy.gov/sites/prod/files/edg/media/Secretary_s_Recommendation_Report.pdf (accessed March 4, 2015).

[14] In terms of the neo-classical growth model, entrepreneurship is an important factor affecting the rate of technological change and the marginal productivity of capital.

[26] Chairman of the House Agriculture Committee, Mike Conaway (R–TX), is drawing attention to the separation issue: “The House Agriculture Committee will take another look at the idea of severing nutrition programs from the rest of the farm bill as part of its upcoming review of the Supplemental Nutrition Assistance Program…. ‘We’re going to have to create an urban-rural alliance that helps us pass the next farm bill that’s not based or held together by the SNAP program.’” “Lawmakers to Consider Splitting Next Farm Bill, Conaway Says,” Seminole Sentinel, February 8, 2015, http://www.seminolesentinel.com/Content/News/State-and-National/Article/Lawmakers-to-consider-splitting-next-farm-bill-Conaway-says/1/8/5677  (accessed March 11, 2015).

[31] This USDA Food Safety and Inspection Service (FSIS) estimate includes the costs to both the federal government and industry. The government would bear 98 percent of the costs. The GAO had some concerns about this estimate. U.S. Government Accountability Office, “Seafood Safety: Responsibility for Inspecting Catfish Should Not Be Assigned to USDA,” GAO–12–411, May 2012, http://www.gao.gov/assets/600/590777.pdf  (accessed March 13, 2015). For example, the GAO explained, “FSIS indicated that it did not have complete information on the total number of domestic and foreign catfish processing facilities that would be affected by the proposed regulations.” Ibid., p. 20.

[32] U.S. Government Accountability Office, “Seafood Safety: Responsibility for Inspecting Catfish Should Not Be Assigned to USDA.”

[49] Diane Katz, “The CFPB in Action: Consumer Bureau Harms Those It Claims to Protect,” Heritage Foundation Backgrounder No. 2760, January 22, 2013, http://www.heritage.org/research/reports/2013/01/the-cfpb-in-action-consumer-bureau-harms-those-it-claims-to-protect.

The Numbers Are In: Trump’s Tax Cuts Paid Off