The Constitution’s genius begins with recognizing both the virtues and limitations of human nature. It establishes a system of government that channels human nature toward the good of all.

The first plan the Framers tried after declaring independence was called the Articles of Confederation. The government that the Articles created failed because it was too weak to coordinate national policy among states with different priorities. Before the government could do almost anything, the Articles required a unanimous vote by all of the states, which often put the states in the position of voting against their own individual interests. The Framers saw that it was not realistic to expect the states to do that. George Washington wrote, “We have probably had too good an opinion of human nature in forming our confederation.”10 So the Framers tried again, creating a system of government that did not deny the pursuit of self-interest, but instead helped to direct it toward compromise and consensus.

The Framers knew that human nature made this a difficult task. James Madison, for example, wrote that “[i]f men were angels, no government would be necessary” and that “[i]f angels were to govern men, neither external nor internal controls on government would be necessary.”11 The challenge they faced was that “[y]ou must first enable the government to control the governed; and in the next place, oblige it to control itself.”12

The Constitution accomplishes this by preventing too much power from ending up in too few hands. The Constitution divides and disperses government power, making it difficult for any person or group to obtain power without first seeking to compromise and reach consensus with others. The Constitution divides power to create “checks and balances”13 among the three branches of the federal government and between the states and the federal government while also recognizing the priority of certain individual rights and requiring widespread agreement to change the “supreme law of the land.”

The Constitution divides government power in different ways. Federalism divides it vertically between the state and federal governments. State government is closer to the people and therefore should be principally responsible for looking after the people’s “domestic and personal interests.”14 Especially as the country and its population spread, the federal government would be increasingly unable to address these ongoing needs.

On the other hand, giving states too much power would hamper efforts to address the country’s collective interests. For example, if Maine were invaded, Florida might consider that the cost of helping with resources and lives outweighed the benefits of preserving the Union. Or if each state had its own currency, trade and commerce would be almost impossible. The question was how to strike the right balance between the individual interests of the states and the collective interests of the nation as a whole. 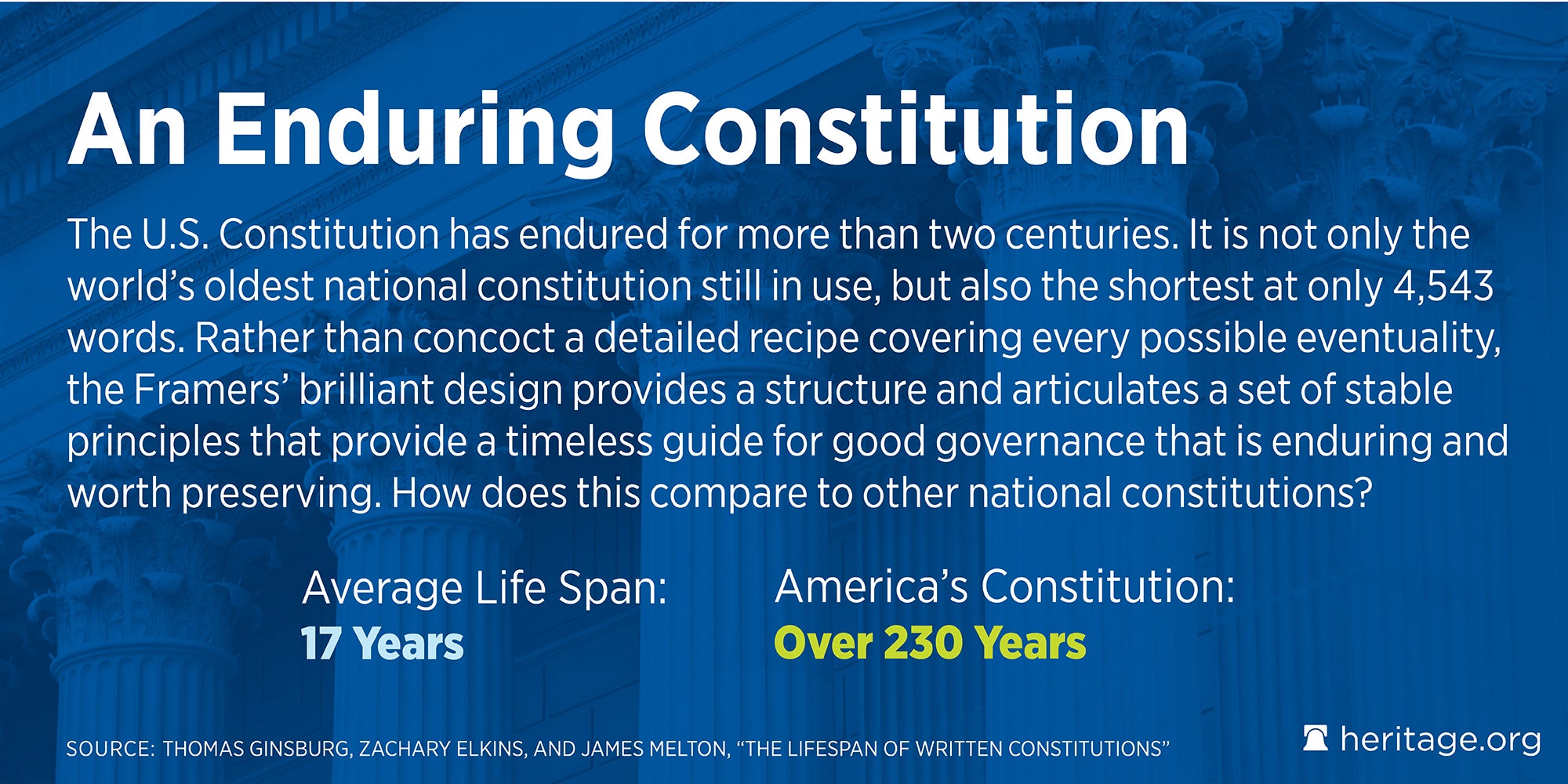 In addition to limiting the powers given to the federal government, the Framers also divided those federal powers into three branches. The legislative branch (which itself is divided into the House of Representatives and the Senate) makes laws, the executive branch enforces them, and the judicial branch interprets them when settling legal disputes.

Once again, the Framers wanted to prevent too much power from ending up in too few hands because that would endanger the freedoms that government exists to secure. Madison, for example, wrote that putting legislative, executive, and judicial powers “in the same hands, whether of one, a few, or many…may justly be pronounced the very definition of tyranny.”16 Quoting Montesquieu, he continued that “there can be no liberty…if the power of judging be not separated from the legislative and executive powers.” After all, if one body possessed the power to make and enforce laws, nothing would stop it from enacting unjust laws. Likewise, if the same body exercised both the power to write laws and the power to decide legal disputes, nothing would stop it from arbitrarily changing the law to suit the government’s needs. Critically, the government could change the law without considering the will of the people.

Separating the powers of government to protect against tyranny makes sense, but why does the Constitution separate them as it does? It all comes down to timing. A large body of people like Congress acts slowly and deliberately. When it comes to passing laws that will govern all the people of the country, deliberation and debate help to promote compromise and consensus. But speed is necessary if the nation is attacked and a defense must be mounted. In that case, one President can act much faster than an assembly can. Likewise, when the nation needs to speak to foreign countries, one person can present a unified message that Congress cannot.

The Constitution gives to the judicial branch the power to interpret and apply the Constitution or statutes to decide individual legal disputes. Alexander Hamilton explained that this requires the “judgment” of a court rather than the “will” of the legislative branch or the “force” of the executive branch.17 Unlike legislators or the President, federal judges do not have specific terms, so they are free to render judgment impartially and without fear of political retaliation.

The Bill of Rights

Each of us has certain fundamental rights that no government may ever take away. The Declaration of Independence refers to these as “unalienable” rights. These include the freedom to practice any religion you choose, to speak your mind, to petition the government to change the law, to be free from unreasonable searches and seizures, to bear arms, to have a fair trial, and to be free from cruel and unusual punishments. The Bill of Rights guarantees those rights for each and every individual, even if the government or a majority of the people might wish to deny those rights to someone.

Justice Antonin Scalia once observed that  “[e]very banana republic in the world has a bill of rights.” Most are just “words on paper” because those countries’ constitutions do not “prevent the centralization of power in one person or in one party.”18 It is the structure of government established by our Constitution that makes our system distinctive. Federalism and the separation of powers, a bicameral legislature, and a judiciary that is independent of the two political branches combine to form a design for government that makes the Bill of Rights real and meaningful. 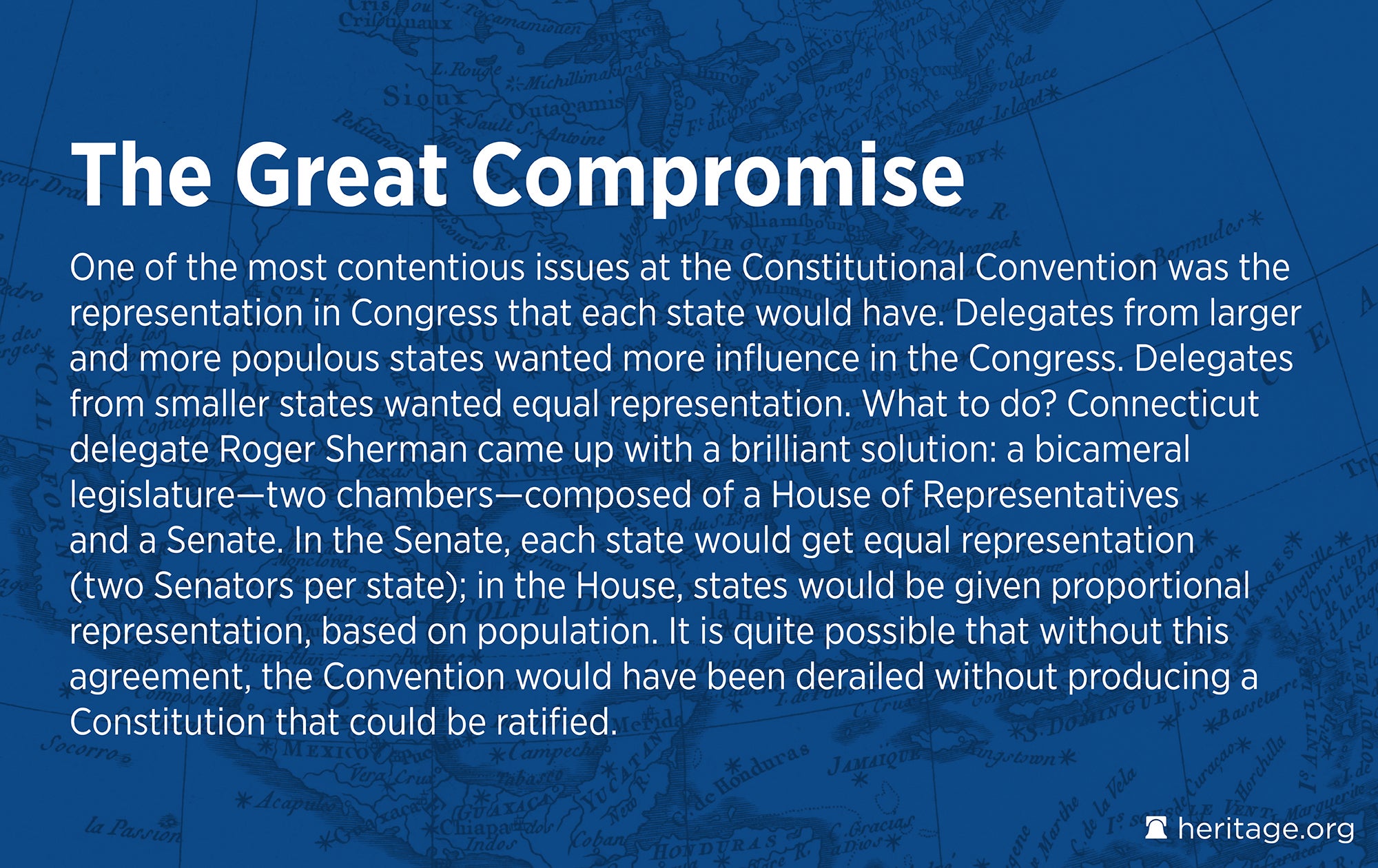 The U.S. Constitution is the oldest written charter in continuous use anywhere in the world. In the famous case of Marbury v. Madison, the Supreme Court in 1803 explained that the Framers wrote the Constitution down for a very practical reason: so that its rules for government “may not be mistaken, or forgotten.”19 When he left office, President George Washington said that because the Constitution expresses the people’s will, it is “sacredly obligatory upon all” until it is changed by “an explicit and authentic act of the whole People.”20 That act is the process for amending the Constitution.

>>> How Does the Constitutional Amendment Process Work?

By permitting amendments, the Constitution allows the people of today both to continue operating with the rules that have been established and to change those rules if they see fit to do so. By design, amending our “great charter of liberty” is difficult and requires extensive deliberation to ensure that amendments reflect the settled opinion and will of the people. As James Madison explained in The Federalist, the amendment procedure allows subsequent generations to correct errors and make whatever “useful alterations will be suggested by experience.”21 At the same time, the difficulty of the amendment process prevents the Constitution from being weakened or deprived “of that veneration, which time bestows on everything, and without which the wisest and freest governments would not possess the requisite stability.”22

Amendments have been suggested thousands of times since the Constitution was ratified in 1789, but the states have approved only 27 of the 33 amendments Congress has actually proposed. These included adding the Bill of Rights, changing the way the President and Vice President are elected, abolishing slavery, preventing state governments from discriminating against any person, guaranteeing the right to vote to all citizens regardless of race or sex, giving the federal government the power to collect an income tax, providing for the direct election of Senators, and both outlawing (in 1919) and then legalizing (in 1933) the production and distribution of alcohol.

The great genius of the Constitution is this: it permits the people to govern themselves by putting the power of government in their hands, by protecting them from those who would take power or liberty from them, and by giving each successive generation the ability to improve upon the government bequeathed to them by those who came before.

Threats to the Constitution