With its active and growing ballistic missile capability, North Korea poses definite threats to the U.S. homeland in addition to contributing to the general threat of regional war in Asia and threatening U.S. bases in South Korea, Japan, and Guam. North Korean belligerence toward the United States has included military and diplomatic threats. Pyongyang’s provocative behavior also includes nuclear and missile tests and tactical-level attacks on South Korea, a critical American ally that remains under active threat of attack and invasion from the North, and Japan faces both intimidation attacks intended to deny the U.S. its base access to Japan and nuclear attacks on U.S. bases in the case of conflict on the Korean Peninsula.1 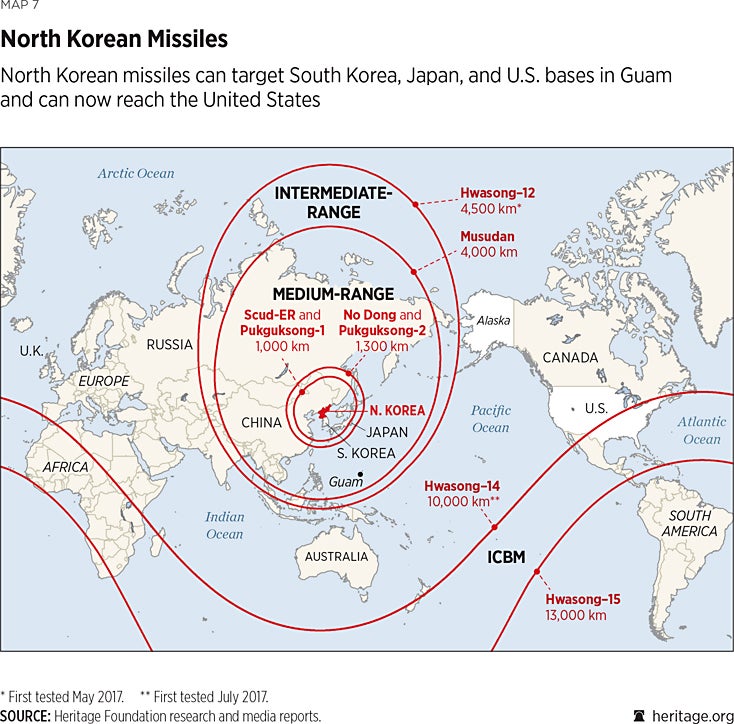 Threats to the Homeland

In 2017, North Korea conducted three successful tests of two variants of its road-mobile intercontinental ballistic missile (ICBM). All launches were flown in an elevated trajectory so as not to fly over Japan and to allow testing of a reentry vehicle to protect a nuclear warhead during an attack. Experts assess that the Hwasong-14 ICBM has the capability to fly 10,000 or perhaps 11,000 kilometers. At that range, Los Angeles, Denver, and Chicago (and possibly New York City, Boston, and Washington, D.C.) are within range.2 The Hwasong-15 has a range of 13,000 kilometers and could reach the entire continental U.S.3 North Korea conducted its fourth and fifth nuclear tests in 2016 and its sixth—the first test of a much more powerful hydrogen bomb—in 2017.

These events clearly signaled that new leader Kim Jong-un had no intention of abiding by U.N. resolutions that require a cessation of Pyongyang’s nuclear and missile programs. North Korea has declared that it already has a full nuclear strike capability, even altering its constitution to enshrine itself as a nuclear-armed state.4 In 2017, Kim Jong-un declared that North Korea had completed development of a nuclear ICBM to threaten the American homeland and vowed to “bolster up the nuclear force in quality and quantity.”5

In January 2018, then-CIA Director Mike Pompeo assessed that North Korea would attain an ICBM capability within a “handful of months.”6 Several U.S. military commanders, however, have stated their assessment that North Korea already has that capability, including U.S. Forces Korea in its 2019 Strategic Digest.7

In June 2018, President Trump met with Kim Jong-un in Singapore and subsequently declared that “there is no longer a nuclear threat from North Korea” and that “total denuclearization already start[ed] taking place.”9 Secretary of State Michael Pompeo repeatedly claimed that North Korean leader Kim Jong-un had accepted U.N.-mandated complete, verifiable, and irreversible dismantling of his nuclear, missile, and biological and chemical weapons (BCW) programs. However, during the February 2019 Trump–Kim summit, it became clear that Kim has not agreed to do so and that the two sides still do not even have a common definition of “denuclearization” or what constitutes the Korean Peninsula.

Despite two U.S.–North Korea summit meetings, there has been no decrease in North Korea’s weapons of mass destruction (WMD) arsenal or production capabilities. The U.S. Intelligence Community subsequently assessed that Pyongyang had increased its production of fissile material for nuclear weapons, and satellite imagery showed upgrades to missile, reentry vehicle, missile launcher, and nuclear weapon production facilities.10 The Intelligence Community continues to assess that North Korea “is unlikely to give up all of its WMD stockpiles, delivery systems, and production capabilities.”11

North Korea has “more than 1 million soldiers, making it the world’s fourth-largest military,” with reserves numbering several million more. In addition, “[a]bout 70 percent of [its] ground forces and 50 percent of its air and naval forces are deployed within approximately 60 miles of the Demilitarized Zone (DMZ),” making it possible to attack “with little to no warning,” which is of particular concern because South Korea’s capital, Seoul, is only 30 miles south of the DMZ.13

The April 2018 inter-Korean summit led to bilateral pledges of nonaggression and mutual force reduction. Similar pledges were also contained in the 1972, 1992, 2000, and 2007 joint statements, all of which Pyongyang subsequently violated or abrogated. None of those pledges prevented North Korea from conducting provocations, attempted assassinations of South Korea’s president, terrorist acts, military and cyberattacks, and acts of war.

In September 2018, the two Koreas signed a Comprehensive Military Agreement to ease military tension and build confidence. The agreement seeks to reduce the danger that inadvertent tactical military clashes along the DMZ might escalate to larger strategic conflicts. However, static defensive positions like fixed concrete bunkers and minefields are not threatening and have never been the source of military clashes on the peninsula. Rather, the greatest danger arises from the forward, offensively oriented disposition of North Korea’s forces and the regime’s history of making threats and initiating hostilities. The confidence-building measures implemented to date have not reduced North Korea’s tactical or strategic conventional military threat to South Korea, nor do they represent progress in denuclearization.

Due to a predicted shortfall of 18-year-old conscripts by 2025, South Korea has initiated a comprehensive defense reform strategy to transform its military into a smaller but more capable force to deal with the North Korean threat. Overall, South Korean military manpower will be reduced approximately 25 percent, from 681,000 to 500,000. The army would face the largest cuts, disbanding four corps and 23 divisions and cutting troops from 560,000 in 2004 to 370,000 in 2020. Seoul planned to compensate for decreased troop levels by procuring advanced fighter and surveillance aircraft, naval platforms, and ground combat vehicles.14 Some advisers to the Moon Jae-in administration have suggested that force levels could be reduced further if progress is made in improving inter-Korean relations.

Since the North Korean military is equipped predominantly with older ground force equipment, Pyongyang has prioritized deployment of strong asymmetric capabilities that include special operations forces, long-range artillery, and missiles. As noted, North Korea has deployed hundreds of Scud short-range ballistic missiles that can target all of South Korea with explosive, chemical, and biological warheads. The land and sea borders between North and South Korea remain unsettled, heavily armed, and subject to occasional, limited armed conflict.

The North Korean military poses a security challenge for American allies South Korea and Japan, as well as for U.S. bases in those countries and Guam. North Korean officials are belligerent toward the United States, often issuing military and diplomatic threats. Pyongyang has also engaged in a range of provocative behavior, including nuclear and missile tests and tactical-level attacks on South Korea.

North Korean forces arrayed against American allies in South Korea and Japan are substantial, and North Korea’s history of provocation is a consistent indicator of its intent to achieve its political objectives by at least the threat of force. Its missile capabilities are advancing, and although it has fewer warheads and systems than China, as well as questionable means of delivery, it is also less stable and less predictable, with a vastly lower stake in the international system.

North Korea has used its missile and nuclear tests to enhance its prestige and importance domestically, regionally, and globally and to extract various concessions from the United States in negotiations over its nuclear program and various aid packages. Such developments also improve North Korea’s military posture. Pyongyang likely has already achieved warhead miniaturization, the ability to place nuclear weapons on its medium-range missiles, and an ability to reach the continental United States with a missile.

Learn about the think tank researchers and expert reviewers who contributed to this publication.

“As currently postured, the U.S. military is only marginally able to meet the demands of defending America’s vital national interests.”

This Index, backed by an irrefutable body of research, points out exactly what investments are needed and where so that the American people, both today and in generations yet to come, will have a military that is capable of defending them.