A new Congressional Budget Office report reveals that the federal deficit for the current fiscal year has once again exceeded $1 trillion.

The driving force behind America’s astronomical deficit is the rapid increase in spending.

The longer Congress puts off reform, the harder it will be to avoid either painful cuts or economy-draining tax hikes.

Ten years ago, the federal government reached a dismal milestone: a one-year deficit of $1 trillion. Now, like too many movie franchises, we’re getting the sequel whether we want it or not.

A new Congressional Budget Office report reveals that the federal deficit for the current fiscal year has once again exceeded $1 trillion.

The driving force behind America’s astronomical deficit is the rapid increase in spending. Federal outlays are up 7% compared to 2018, which far outstrips inflation, population growth, and the economy.

It is worth comparing America’s situation to that of similar nations, both in 2009 and today, to see why the current deficit is so unacceptable.

The Great Recession of 2008 ate into tax revenue. At the same time, the wasteful and ineffective stimulus legislation generated a record high for spending. Trillion-dollar deficits, which were a factor in launching the Tea Party movement, lasted from 2009 through 2012.

The U.S. was hardly alone in this. The recession devastated the global economy and damaged the bottom line of other nations a result. Most were able to rein in deficits as the economy rebounded.

With robust global growth over the last several years, a majority of developed nations are taking advantage by shrinking the size of their debt relative to the size of the economy. This ratio, often written as “debt-to-GDP”, is important because it points to how well a nation can afford its current level of debt.

The International Monetary Fund projects that of the 10 largest advanced economies, the U.S. will have by far the largest debt growth relative to its economy over the next five years. 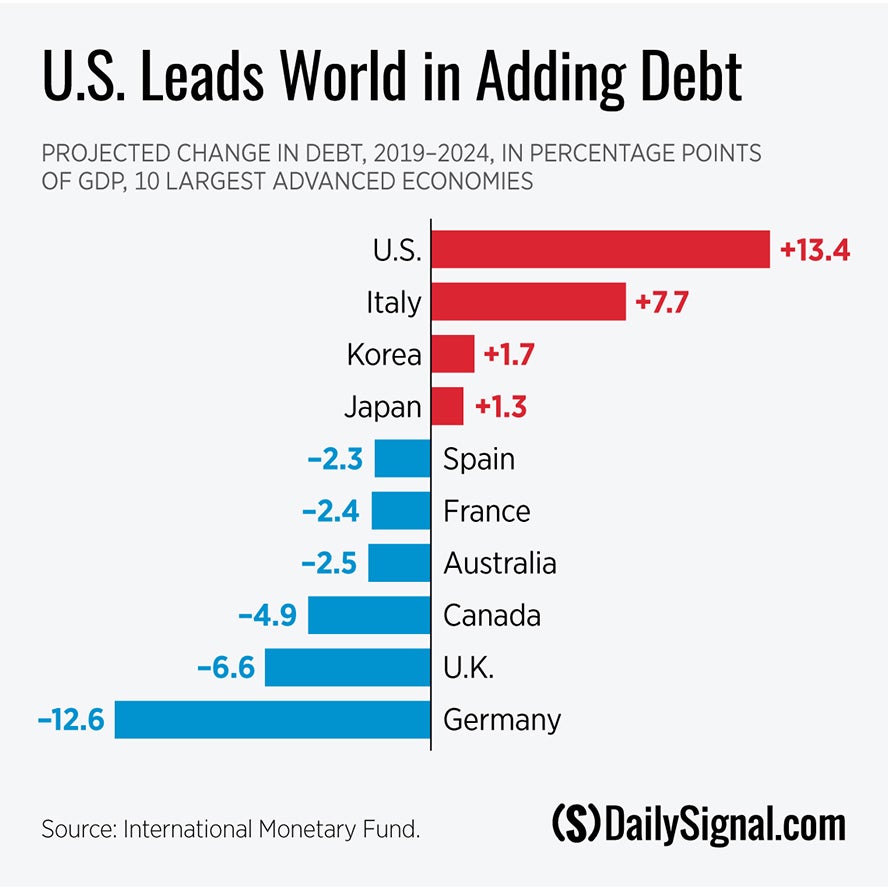 America’s fiscal health should be just as strong as that of our counterparts. Revenues are up 3.4% from 2018, the vibrant economy means less safety net spending compared to recession years, and the military is not fully engaged in war.

Regrettably, our Congress has chafed at even modest spending restraints.

As the Tea Party dissipated, a lack of political pressure allowed big-spending legislators to pig out once more. Budget caps were repeatedly overridden, deficits crept back up, and America is now right back where it started 10 years ago: trillion-dollar deficits.

Although the 2019 deficit could ultimately dip below $1 trillion depending on September’s numbers, the fact remains that even a “mere” $960+ billion deficit for the year is inexcusable.

The majority of federal dollars do not go toward commonly cited categories such as defense (cited by progressives) or benefits for illegal immigrants (brought up by conservatives).

Instead, most spending is focused on social benefit programs such as Social Security, Medicare, and Medicaid. These programs are growing much faster than other parts of the federal government. Their size and rapid growth makes them fundamentally unsustainable and thus a threat to the economy

There are multiple reasons for this.

Medicare premiums have long been artificially low, and the government does not properly index Social Security benefits to inflation and life expectancy. As a result, the overwhelming majority of retirees receive more in benefits from these programs than they paid in payroll taxes.

Both programs are in serious trouble as the Baby Boomer generation enters retirement. The imbalance of retirees to active workers is leading to explosive deficits that will bankrupt trust funds in the next few years.

To avoid sudden and painful cuts to retirees who are counting on these benefits, reforms are necessary. The longer Congress puts off reform, the harder it will be to avoid either painful cuts or economy-draining tax hikes.

Meanwhile, members of the House and Senate Appropriations Committees sometimes take the perverse approach of citing the importance of entitlement reform as a reason not to worry about annual spending under their direct control.

In reality, the federal government wastes countless billions every year on badly designed, badly administered, and straight-up bad programs regardless of specific budgetary classifications. Not one penny of waste should get a pass.

The Heritage Foundation’s unparalleled Blueprint for Balance provides legislators with hundreds of ways to fix the nation’s broken budget. Streamlining spending and making the tax code more fair and efficient would protect the country from dangerous levels of debt and further enhance economic growth.

Germany, Canada, the United Kingdom, and France are all on pace to tame their debt. Americans should expect the same responsible governance from their elected officials, and hold them accountable if they continue down the fiscal primrose path.

Tax Increases Would Reverse the Success of Trump’s Tax Cuts