The Budget Is at a Crossroads. Which Path Will Congress Take?

The Budget Is at a Crossroads. Which Path Will Congress Take?

The latest estimates reiterate that the federal government continues to live beyond its means.

The Congressional Budget Office projects public debt will rise by $11.8 trillion over the next decade.

The good news is that Congress and the president have the power to alter this course.

Thanks to the latest massive budget deal passed by Congress, our nation’s fiscal situation is deteriorating even more quickly than before.

The latest estimates reiterate that the federal government continues to live beyond its means. The longer lawmakers delay action to curb wasteful spending and reform unsustainable entitlement programs, the larger the burden will be for younger and future generations.

In May, the Congressional Budget Office projected the deficit would be $896 billion this year and showed it crossing the trillion-dollar threshold in 2022.

The outlook has worsened significantly in just three months. The Congressional Budget Office now projects that by the end of September, the deficit will be $960 billion and exceed $1 trillion next year.

In total, the Congressional Budget Office projects public debt will rise by $11.8 trillion over the next decade.

The problem is not a lack of money. The problem is growing spending. The Treasury took in record revenue in fiscal year 2018, and revenue projections for the coming decade dropped only slightly from May.

Much of the blame for the worsening projections owes to the passage of the Bipartisan Budget Act of 2019. Signed into law in July, the bill was the fourth in a series of two-year agreements to raise the discretionary spending caps set by the Budget Control Act of 2011.

The Bipartisan Budget Act increased base discretionary spending by $322 billion over two years and effectively killed one of the last semblances of fiscal restraint intended to slow Washington’s appetite for spending. 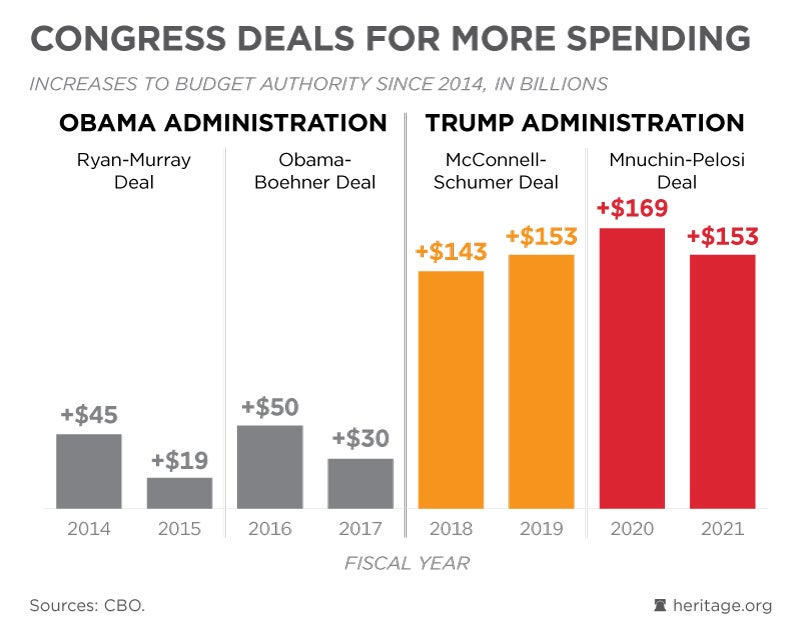 Discretionary spending gets most of lawmakers’ attention, but it makes up only about one-third of total federal spending.

The rest of the federal budget consists of autopilot programs, such as Social Security, Medicare, Medicaid, and interest payments on the federal debt.

The Congressional Budget Office estimates that by 2029, entitlements and interest payments on the national debt will consume 86% of all federal revenues. Social Security, Medicare, and Medicaid are driving three-fourths of total spending growth over the next decade.

The federal government will spend more on interest payments on the debt than Medicaid by 2023 and will nearly eclipse defense spending by 2029.

And these interest payment estimates assume that due to lower rates, payments will now be $1.1 trillion less than the May projections. If rates rise, interest costs will consume even more of the budget.

For many people, debt and deficits are just big numbers that don’t seem to impact their day-to-day lives. But that is not the case.

Without significant reforms to major programs, most Americans over the next 30 years will take home less money as federal debt rises.

The Congressional Budget Office recently sent a letter to Rep. Steve Womack, R-Ark., the ranking member of the House Committee on the Budget, explaining that if current policy is maintained, gross national product per person will be $3,400 lower by 2049.

This is particularly demoralizing for younger and future generations who may never have the same opportunities and economic freedom as their parents and grandparents. 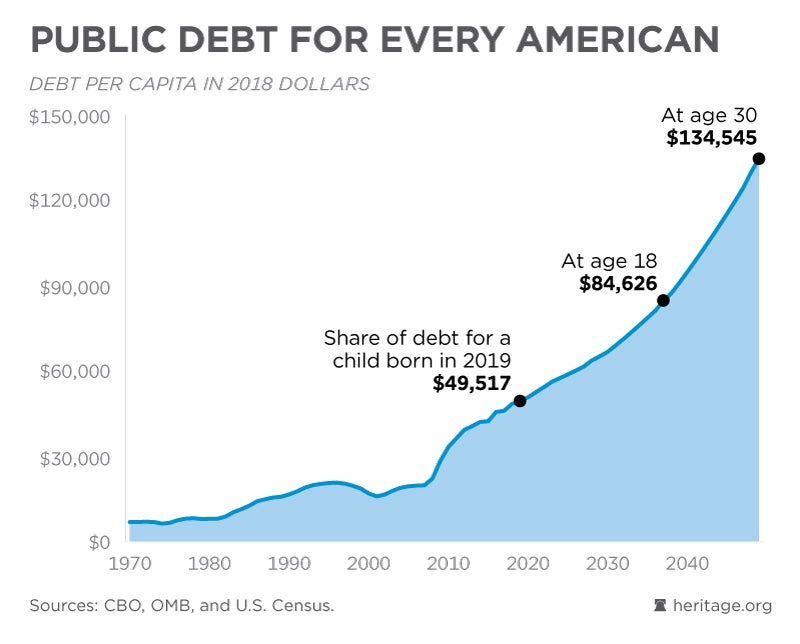 The good news is that Congress and the president have the power to alter this course.

In its letter to Womack, the Congressional Budget Office estimated that if lawmakers implemented reforms to lower the national debt to pre-recession levels, gross national product per person would be $5,500 higher than under current projections.

The picture is clear. The current fiscal situation is unsustainable and the longer reforms are delayed, the harsher the impact will be for current and future generations.

But there is hope. If lawmakers implement spending restraints now, we could each achieve greater economic security.

America’s future is at a crossroads. It’s up to lawmakers to do the hard work of saving our fiscal future.

Declining U.S. Birthrate Another Reason to Rein in Federal Spending

Inflation Something to Be Concerned About Now