David is a policy analyst in the Grover M. Hermann Center for the Federal Budget at The Heritage Foundation.

The United States Postal Service has lost $78 billion over the past 13 years and is facing concerns about bankruptcy.

Several of its most pressing problems are the result of expensive legislative requirements.

Producing a strong business plan and increasing transparency would give the Postal Service more credibility to request flexibility from Congress.

For Louis DeJoy, who recently became postmaster general, it would be an understatement to say that he faces a challenge.

Indeed, the United States Postal Service has lost $78 billion over the past 13 years and is facing concerns about bankruptcy. The future of the Postal Service is the subject of fierce debate in Washington.

However, the challenges posed by big problems can also provide big opportunities. DeJoy, who spent three decades as the CEO of New Breed Logistics, can bring meaningful change to a federal agency with centuries behind it.

Pursuing these five initiatives would benefit both the Postal Service and the nation:

Megan Brennan, the previous postmaster general, promised Congress that the Postal Service would submit a 10-year business plan by the summer of last year. The plan did not arrive until January, only covered five years, and failed to address many issues that drive the agency’s deficits.

A more comprehensive and long-term plan, benefiting from DeJoy’s private-sector logistics experience, could mark a turning point for the organization. From the Treasury Department to The Heritage Foundation, various organizations have provided strong postal reform plans that can help any such effort.

2. Request flexibility from Congress, not a bailout.

While it is possible for the Postal Service to improve its viability through internal reforms, several of its most pressing problems are the result of expensive legislative requirements.

Where Brennan lobbied Congress for a bailout of over $75 billion this spring, DeJoy should instead ask for Congress to give the Postal Service the ability to restructure its operations for the 21st century.

Enactment of reform legislation is vital to the Postal Service’s prospects for survival, and DeJoy should be leading the push for such a measure.

During the first several weeks of the COVID-19 pandemic, calls for a taxpayer-funded bailout of the Postal Service were coupled with predictions of a mid-summer bankruptcy. At the time, there was almost no publicly available financial information to confirm or deny such claims.

As it turned out, the “bankrupt by summer” narrative was wrong, and the Postal Service is now expected to have sufficient resources to operate well into next year. That is less than ideal, but it does provide enough time to initiate major reforms, contrary to the panic promoted by bailout supporters.

Members of Congress, including Sen. Ron Johnson, R-Wis., and Rep. Jim Jordan, R-Ohio, have requested weekly updates and revised financial projections, which would help lawmakers to better gauge the short-term needs of the Postal Service. DeJoy should act quickly to improve the speed and detail of financial reports along those lines.

Another contentious aspect of Postal Service operation has been the way it sets prices for mail and package delivery.

The Postal Service has a federally enforced monopoly on both first-class mail and mailboxes, which ought to be sufficient to make it financially self-sufficient. However, there are concerns that the service is setting prices for non-monopoly package delivery artificially low, aiming for volume rather than sustainable revenue.

This spring, a federal appeals court ruled that the Postal Regulatory Commission (which sets prices) failed to properly explain its package pricing formula. Private-sector competitors such as UPS argue that if the Postal Service properly accounted for the costs associated with packages, they would have to raise prices.

The Postal Service Office of Inspector General has criticized the pricing approach as being severely outdated.

DeJoy should seek an audit, perhaps by a private accounting firm, to determine if the Postal Service is setting its prices at financially responsible levels. The audit should be made public, along with the internal methodology used to determine prices, and the service should adjust its prices accordingly if the audit finds flaws. 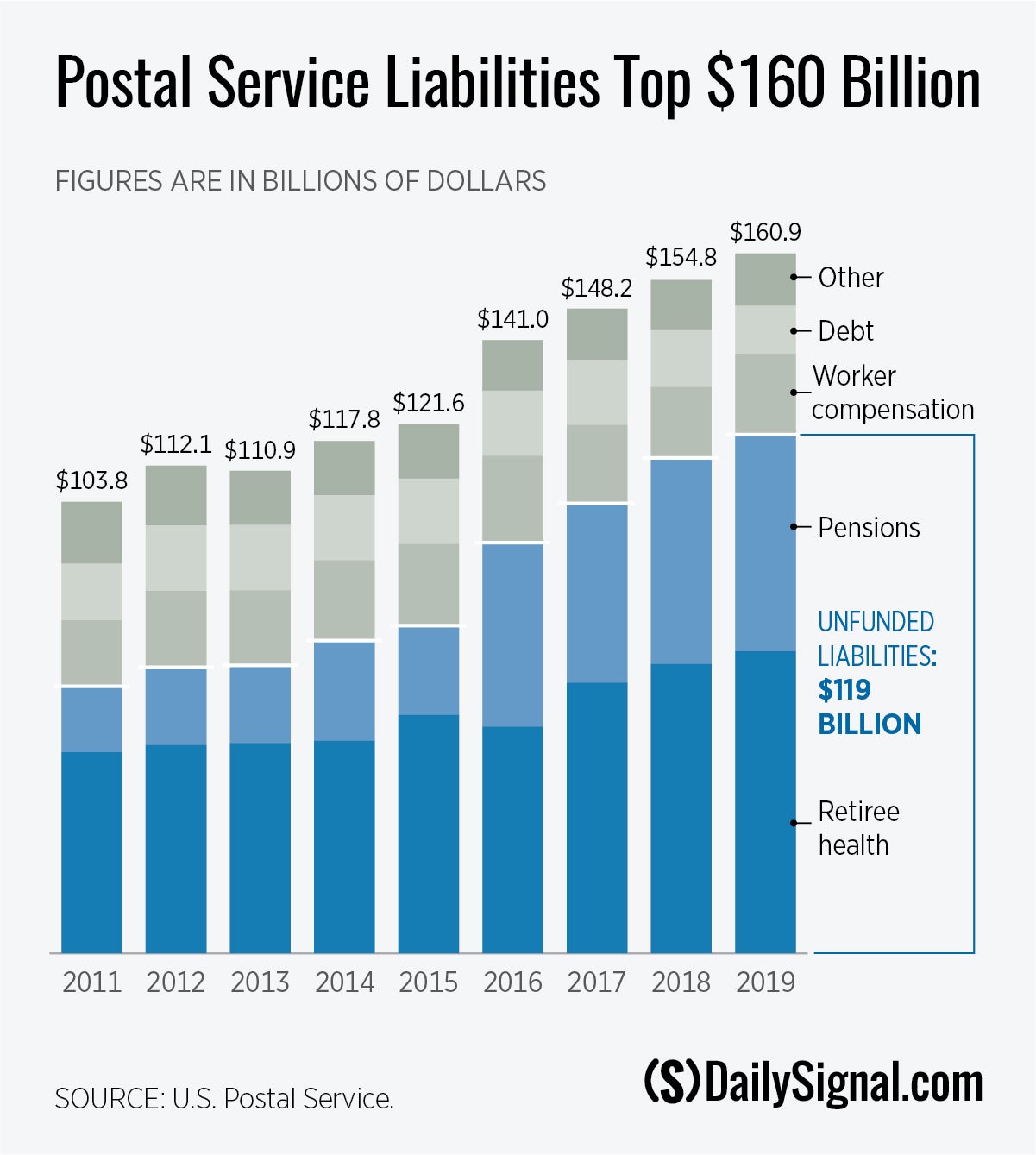 Perhaps the greatest problem looming over the Postal Service involves payments that it owes for employee retirement benefits.

However, the Postal Service has failed to make any payments for the past seven years, causing the unfunded liability to swell to $69 billion. This practice threatens the well-being of employees who are counting on the benefit, and threatens taxpayers who could potentially be forced to bail out the fund.

As postmaster general, DeJoy has an opportunity to save the United States Postal Service from bankruptcy. To do so, he should take action as soon as possible to set these ideas into motion.