David is a policy analyst in the Grover M. Hermann Center for the Federal Budget at The Heritage Foundation.

Congress included a $10 billion loan to the Postal Service in the CARES Act relief package.

While the problems are serious, there are plenty of solutions available to legislators who want to modernize mail service while protecting taxpayers.

Congress has known about the unsustainable finances of the Postal Service for years. Now, the problem has come to a head.

If you followed only the headlines and mainstream press coverage, you might think that the U.S. Postal Service was on the verge of bankruptcy and needs an immediate taxpayer bailout of $75 billion or more to keep functioning.

However, a financial report that the USPS released on Friday revealed a crucial piece of information that single-handedly obliterates months of fearmongering: The Postal Service has enough resources to continue operations for at least an entire year, even after accounting for the effects of the COVID-19 pandemic.

That means that Congress has more than enough time to put together legislation to reform (or transform) the Postal Service, which has serious long-term problems that a bailout would utterly fail to address.

The issue of USPS solvency came to the forefront in March, when the Postal Service began telling members of Congress that it faced a reduction in revenue and increased costs in the wake of COVID-19.

As a result, Congress included a $10 billion loan to the Postal Service in the CARES Act relief package.

However, congressional Democrats and a former postmaster general claimed that that was insufficient, calling for a massive bailout package of taxpayer-funded cash grants and loans to ensure continued mail service.

Much of the media coverage focused on tenuous claims from House Democrats that the USPS could go bankrupt as early as this summer, even with the CARES Act loan.

That false narrative, which has persisted, thrived in part because of a nearly complete lack of public data on the financial state of the Postal Service.

The lack of information even extends to Congress. Sen. Ron Johnson, R-Wis., who as chairman of the Homeland Security and Governmental Affairs Committee oversees the Postal Service, issued a letter last week requesting weekly financial updates from the Postal Service.

The Lexington Institute, an Arlington, Virginia-based nonprofit that advocates for limited government, pointed out that a sharp increase in package deliveries was compensating for lower mail volume. That means that the Postal Service is not experiencing the type of steep revenue drop that businesses such as restaurants and hotels are facing.

The latest USPS quarterly financial report made this reality crystal clear. The report, which covers the period from January through March, shows a 2%  increase in revenue over the year before.

If USPS revenue had actually collapsed as a result of COVID-19, we would have seen at least a modest decrease for the quarter.

The report goes on to say that the service has “sufficient liquidity to continue operating through at least May 2021.”

Thus, the USPS itself has debunked the union-backed push for including a big postal bailout in the next COVID-19 relief bill.

However, there is one thing that everyone can agree on: The Postal Service is in trouble.

It details the long-term decline in first-class mail, increasing liabilities fueled by the costs of retiree pensions and health benefits, and expensive service mandates imposed by Congress that ignore the reality of life in the 21st century. 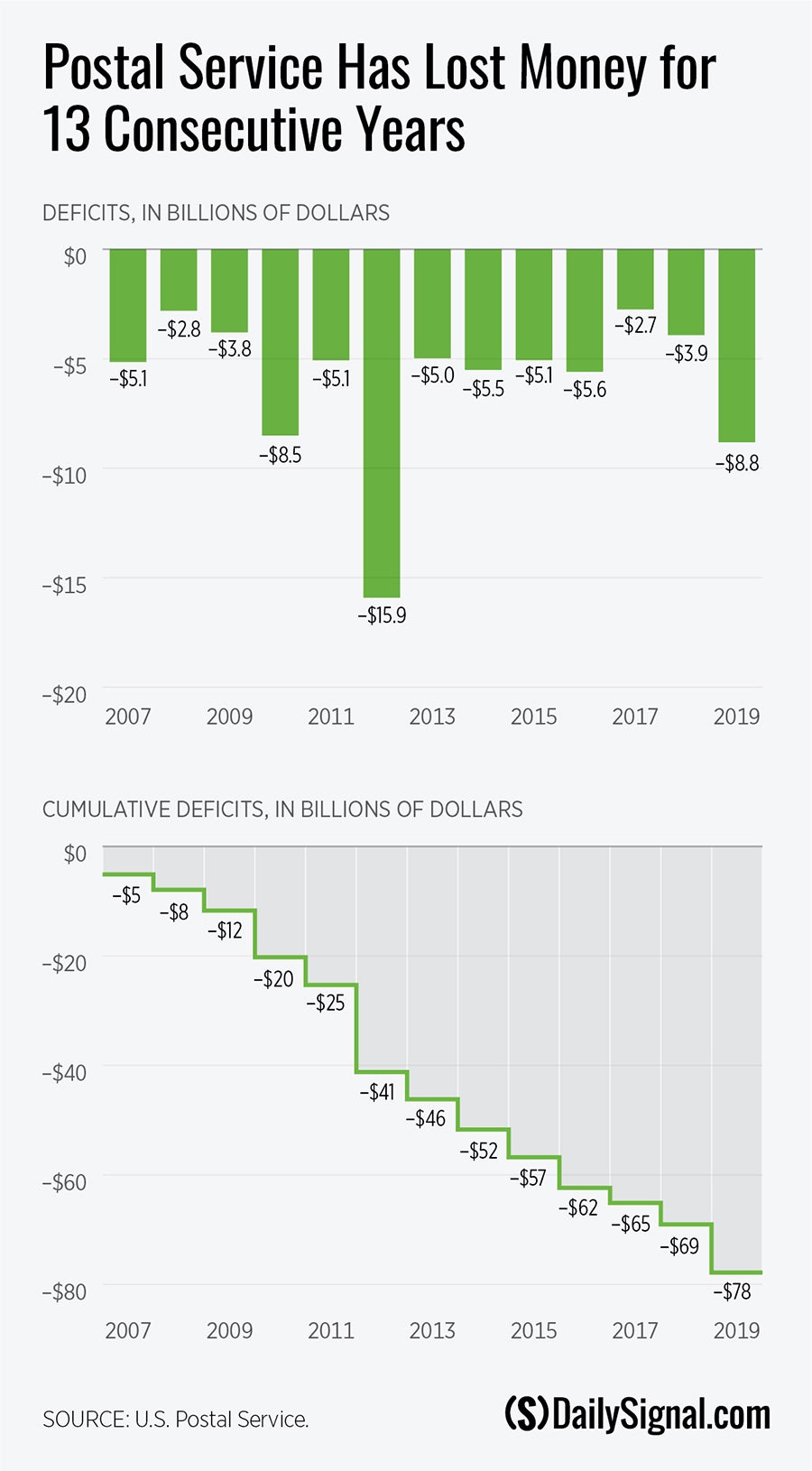 While the problems are serious, there are plenty of solutions available to legislators who want to modernize mail service while protecting taxpayers.

On May 8, The Heritage Foundation released a robust policy report on the Postal Service. The report lays out plain facts about long-term structural issues that threaten the viability of the USPS and provides a variety of approaches to fixing them. Those include:

Many of those reforms were included in the fiscal 2021 budget proposal from President Donald Trump.

Even if Congress balks at the best and boldest ideas, there are still plenty of commonsense ideas available to legislators. If Congress can pass meaningful reforms in the next few months, that would give the USPS (and its new postmaster general) sufficient time to implement the reforms and stanch the financial bleeding.

Cutting a big check to the USPS with taxpayer money would merely pass the problem (and the bill) onto future generations. Further, the USPS’ own financial report shows that there’s no justification for an immediate bailout.

Congress has known about the unsustainable finances of the Postal Service for years. Now, the problem has come to a head.

When it comes to postal reform, there’s no more time to waste.