Lee Edwards is a leading historian of American conservatism and the author or editor of 25 books.

Beijing is threatening the individual freedom that the people of Hong Kong enjoy more than any other “city” in China.

Today, Hong Kong residents understand how precious their freedom is and how easily it can be lost. They are willing to risk everything to preserve it.

Democracy is a resilient ideal not easily suppressed.

Students, young professionals, and not-so-young Chinese have now demonstrated in Hong Kong for many weeks, despite the brutal attempts by the government to stop them.

The police have used clubs, tear gas, and water cannons—everything but dogs—to silence them. “If we didn’t protest,” one young woman said, “this might become just another Chinese city.”

Why are they protesting? What is so unique about Hong Kong?

According to Marxist doctrine, which recognizes only the material side of man, the residents of Hong Kong should be the most contented citizens of the People’s Republic of China.

Their per capita income is $58,322 ($1,000 higher than ours). Inflation is 2.6%, unemployment 3.4%. There are 87 billionaires in Hong Kong. According to The Heritage Foundation’s Index of Economic Freedom, Hong Kong has the freest economy in the world.

And yet, the residents of Hong Kong are challenging the authority of their local government and the communist leadership in Beijing—thereby risking their fortunes and their lives.

The immediate reason they took to the streets was to oppose a law that would allow Hong Kong suspects to be tried under mainland China’s judicial system, which hands down multi-year prison sentences as easily as a tap of the gavel. 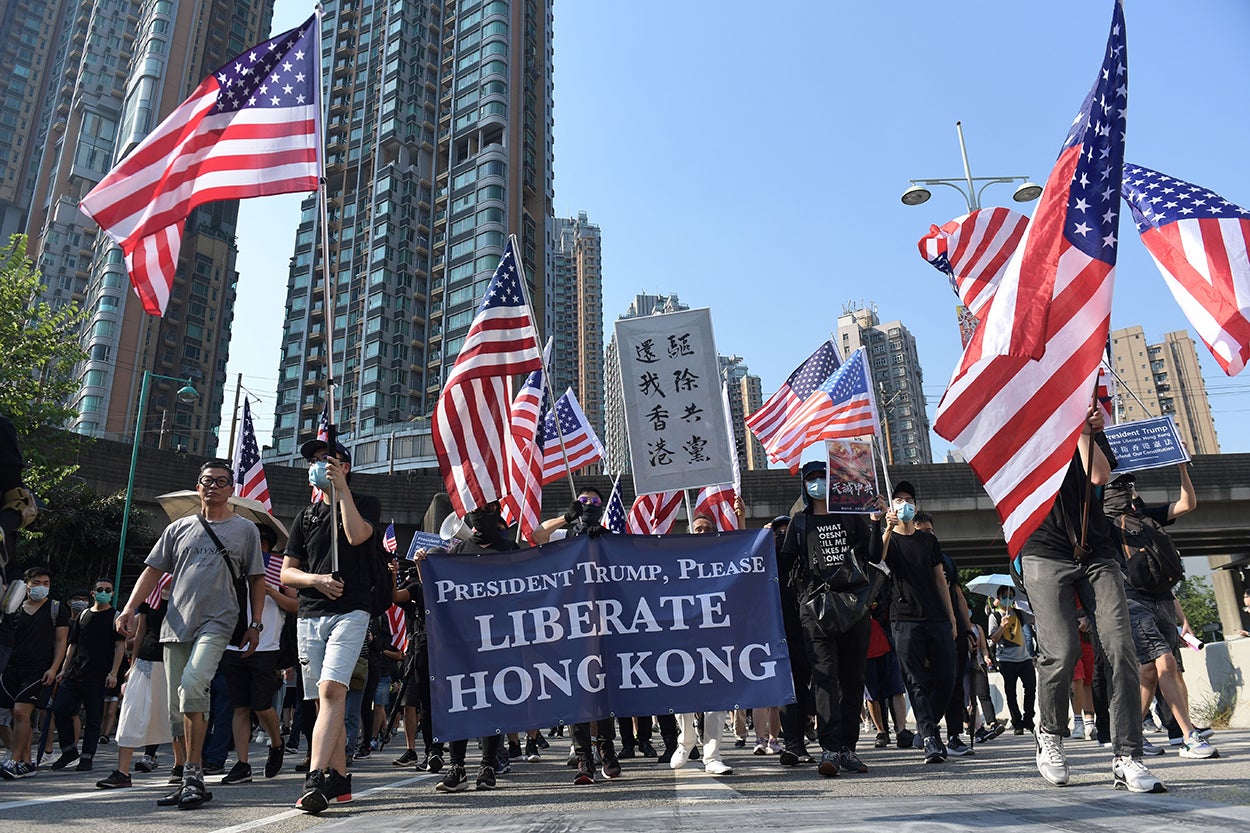 There is a French saying: “Plus ca change, plus c’est la meme chose”—the more things change, the more they remain the same.

Fifty years ago, on my first visit to Hong Kong, I interviewed a number of the young “freedom swimmers” from mainland China who had risked their lives to make the 12-hour swim across shark-infested Hong Kong Bay, evading armed communist patrol boats.

When I asked these young men why they had risked their lives to come to Hong Kong, their invariable answer was, “Freedom.” They were tired of being told what to say, what to read, where to work. They came to Hong Kong not because its streets were paved with gold, but to live as free men, which was impossible in communist China.

Today, Hong Kong residents understand how precious their freedom is and how easily it can be lost. They are willing to risk everything to preserve it.

What can we in the West do to support them?

Protect and patronize the democratic opposition in Hong Kong and throughout China.

This is critically important because opposition, as Chinese political analyst Dimon Liu has written, “is the harbinger of the future.” The U.S. must support an effective human rights policy toward China, including the guarantee of religious freedom. 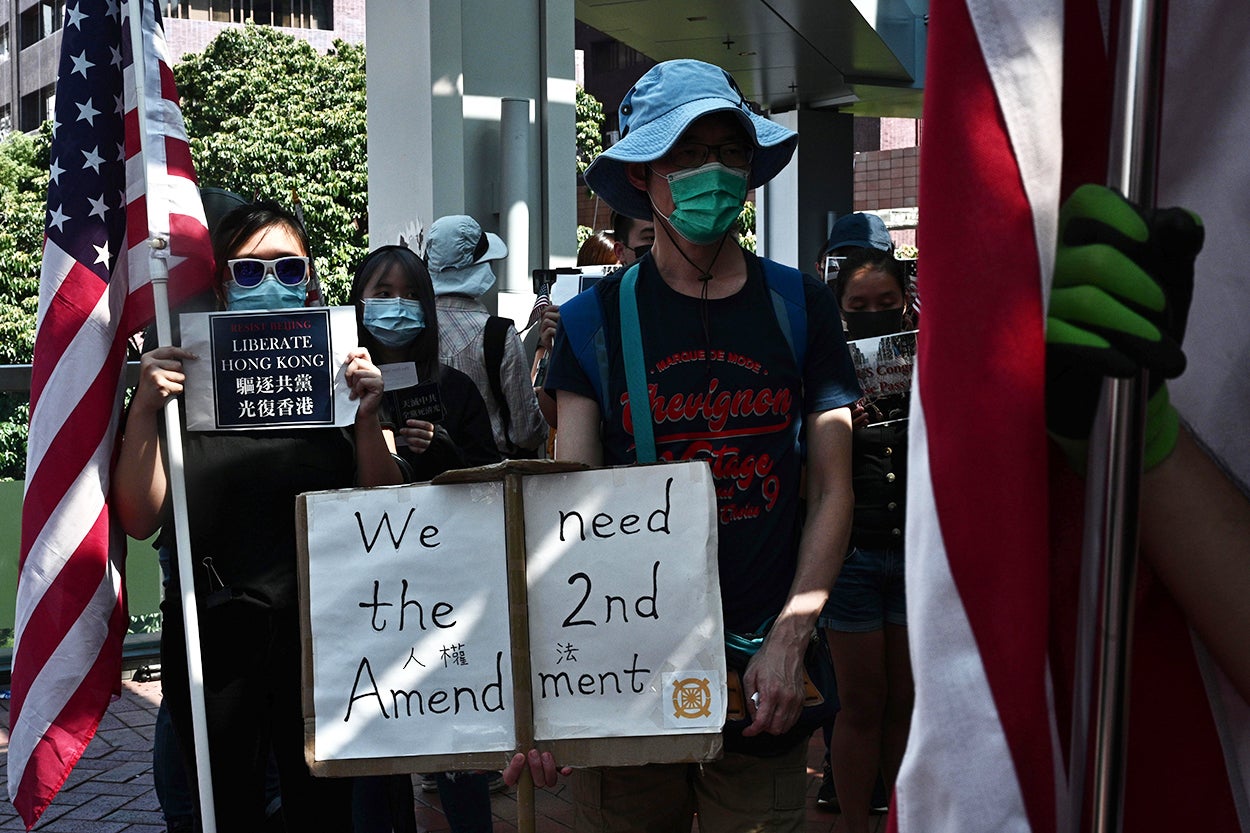 Students hold the U.S. flag and sing “The Star-Spangled Banner” at the Hong Kong University campus on Sept. 20, 2019. One sign reads, “We need the 2nd Amendment.” (Photo: Anthony Wallace/AFP/Getty Images)

Democracy means “rule by the people.” President Xi Jinping and his communist colleagues reject such an idea and are trying to stamp it out whenever it appears.

But democracy is a resilient ideal not easily suppressed. We see that in the Hong Kong demonstrations. We cannot know their final outcome, but it is encouraging that Chief Executive Carrie Lam has announced the full withdrawal (and not just suspension) of the proposed extradition measure.

The Hong Kong demonstrators are the tip of a giant iceberg: the Chinese people, who are no longer satisfied with just a “full rice bowl” but seek basic human rights and some form of democracy.

Within each and every Chinese, whether in Hong Kong or any city in China, there is the innate desire to be free—to be able to live your life not as the government dictates, but as you wish. So it was with the freedom swimmers all those years ago, and so it is today in Hong Kong and in the many other cities and towns of mainland China.

The Life of the Party: Xi’s New Politburo and China’s Technological Ambitions