Riley Walters was a senior policy analyst and economist at The Heritage Foundation.

An important distinction exists between devaluing a currency and currency depreciation.

There’s no indication that China is actively devaluing its currency.

A silver lining beyond the heated rhetoric is that labeling China will have little real effect.

The U.S. Treasury Department has incorrectly labeled China a manipulator of its currency.

An important distinction exists between devaluing a currency and currency depreciation.

Devaluing implies the People’s Bank of China actively manipulated the value of the Chinese renminbi to gain unfair advantage for its exports. Depreciation simply means the renminbi has lost purchasing power relative to the U.S. dollar, based on market forces.

There’s no indication that China is actively devaluing its currency.

However, according to the Treasury Department, China met a broad definition of manipulation laid out in the Omnibus Trade and Competitiveness Act of 1988, which says of the Treasury secretary:

The Secretary considers that such manipulation is occurring with respect to countries that (1) have material global current account surpluses; and (2) have significant bilateral trade surpluses with the United States.

The law itself doesn’t make clear what a “significant” level of trade surplus with the U.S. equals.

Like many things Congress does, it leaves the most critical details of the law to the executive branch to determine. It must do so, because the criteria laid down in the law could implicate any number of countries, such as Japan, India, Taiwan, Thailand, and South Korea.

And the U.S. trade deficit with the European Union is more than $100 billion.

Yet, the criteria Treasury used in this case are different from another criterion it uses to monitor and label currency manipulators based on the Trade Facilitation and Trade Enforcement Act of 2015.

Under that law, and by standards set by the Treasury, a country is considered a currency manipulator only if it: 1) has an annual trade surplus with the U.S. of more than $20 billion; 2) has a material current account surplus that’s more than 2% of its gross domestic product; and 3) has shown persistent, one-sided intervention in foreign exchange markets, with net foreign exchange purchases of more than 2% of its gross domestic product.

China meets only one of these three criteria. It has had a trade surplus with the U.S. valued at more than $300 billion a year since 2012. It hasn’t met more than one criteria since 2016.

Even then, a dozen other countries, such as Mexico, Vietnam, and Switzerland, also meet at least one criteria established under the 2015 law.

The recent announcement comes just days after President Donald Trump announced new taxes on $300 billion worth of imports from China, to begin Sept. 1.

It also comes just after news that the Chinese renminbi depreciated against the U.S. dollar to a symbolic 7 renminbi to $1, down from roughly 6.88 renminbi last month.

Trump claimed this recent depreciation was because of manipulation even before the Treasury Department had a chance to clarify.

Nonetheless, the depreciation of the renminbi beyond 7 renminbi has always been seen as significant.

That’s why over the past four years, the renminbi has depreciated against the dollar roughly 13%, while China’s annual growth in gross domestic product has decreased from 7% to 6.2%. 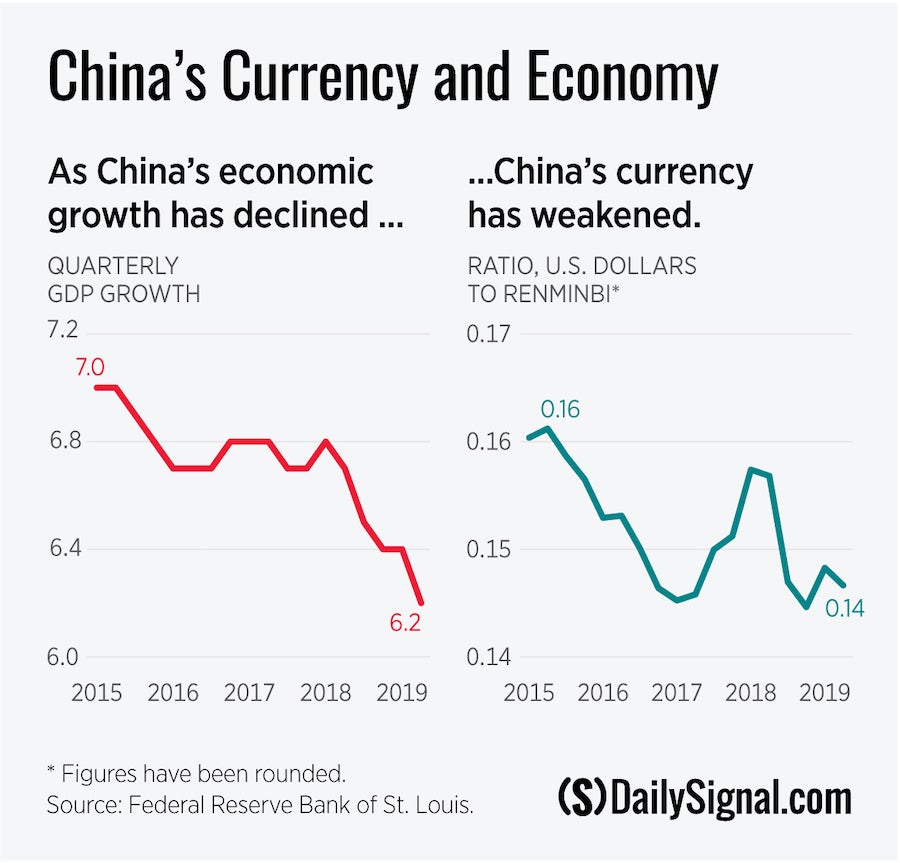 The depreciation beyond 7 renminbi was also seen by the Trump administration as a potential offset to the cost of tariffs it has imposed on imports of goods from China.

A weaker Chinese currency implies American dollars can buy more Chinese exports, while the Chinese can buy fewer American exports. Despite the change in the dollar/renminbi exchange rate, Americans have been paying billions of dollars a month in import taxes.

According to international measures, both the Chinese renminbi and U.S. dollar are overvalued by as much as 15% to 20%. 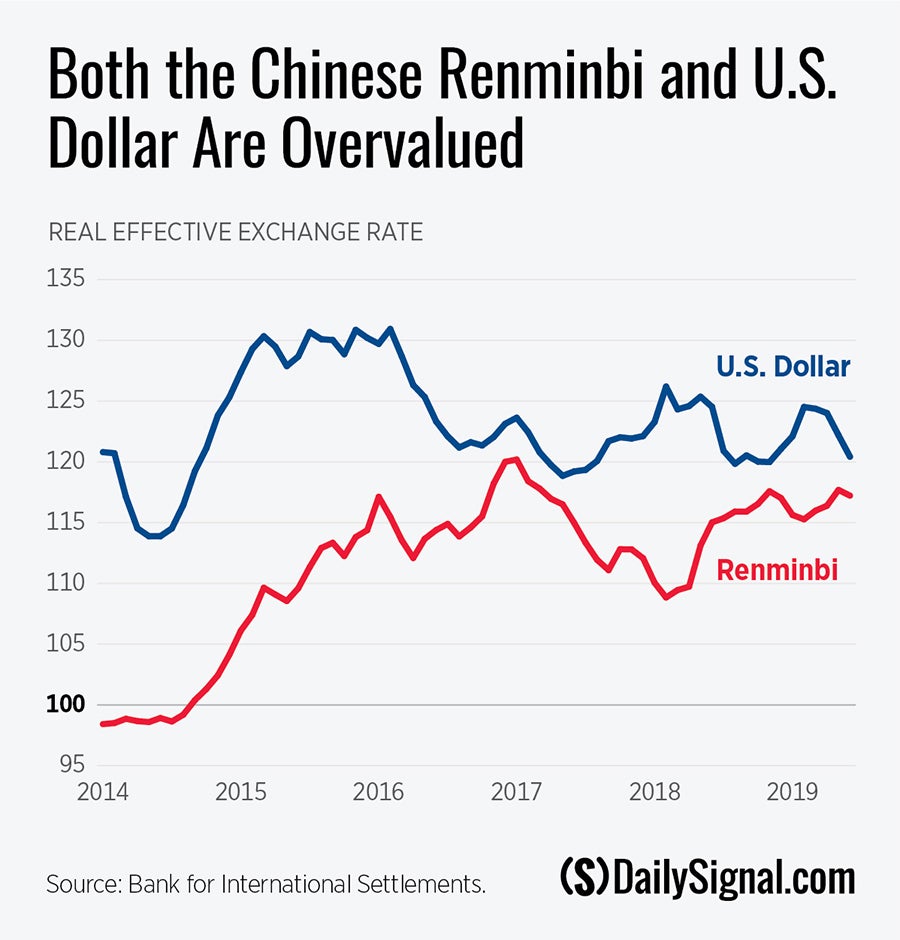 According to the Bank for International Settlements, the real effective exchange rate for China and the U.S. is roughly 123.7 and 115.6, respectively.

That’s well above an index that’s equal to 100, which weighs their relative strength to other global currencies and takes into consideration consumer prices.

The Treasury Department’s semiannual report on the foreign exchange policies of our major trading partners stopped publishing the real effective exchange rate of the Chinese renminbi—potentially because it goes against any argument that China’s currency is undervalued.

China does have a history of currency manipulation. Questions about China’s currency interventions arose in 1992, 1994, 2003, and 2014. Since then, to the extent China has manipulated its currency it has done so only to prop up the value—in order to stem capital flight, not to devalue the currency in an attempt to boost exports, which is mostly what the 1988 law is about.

Now, the People’s Bank of China sets an exchange rate that’s more or less determined by the value of several global currencies and allows the renminbi to depreciate up to 2% a day.

It’s easier for the bank to allow the renminbi to depreciate up to 7 renminbi than to continue to cut into foreign exchange reserves to keep it propped up.

Negotiations on the Horizon

A silver lining beyond the heated rhetoric is that labeling China will have little real effect.

Treasury Secretary Steven Mnuchin will now have to negotiate with Beijing either bilaterally or through the International Monetary Fund to achieve an effective balance of payments.

Reports from earlier this year said a currency agreement is a part of the looming U.S.-China deal. Very little suggests the U.S. could take even further punitive action against China beyond the use of more tariffs.

But the recent escalation, leading to a potential currency war and prolonging of U.S.-China trade tensions, spooked markets. The Dow Jones Industrial Average dropped 3% on Monday.

And if the Trump administration is somehow successful in persuading Beijing to manipulate its currency in the other direction—appreciate the renminbi against the dollar—it would just mean Americans would have to pay even more for Chinese imports.

Why Local Election Results in Taiwan Have Implications for America