Close to 600,000 Burmese Rohingya have fled to Bangladesh after the military retaliated for attacks on its security outposts on August 25.

The ethnic cleansing element of the Rohingya crisis has garnered significant attention.

Secretary of State Rex Tillerson just concluded a visit to Burma where he called upon the government to investigate allegations of atrocities committed by the Burmese military against the Rohingya.

Close to 600,000 Burmese Rohingya have fled to Bangladesh after the military retaliated for attacks on its security outposts on August 25. The UN calls the retaliation a textbook case of ethnic cleansing.

Tillerson also urged Burma to implement the recommendations made by the Kofi Annan Commission. The commission laid out a number of steps to facilitate reconciliation between Burma’s Muslim minority Rohingya and its Buddhist majority.

The Secretary paired these calls with the announcement that the U.S. will increase humanitarian assistance by an additional $47 million. This is the second increase in assistance announced since the crisis began. U.S. aid to alleviate the crisis will now total more than $150 for 2017.

While President Trump focused mainly on the need to counter the growing North Korean threat and to expand existing U.S. trade and investment relationships throughout the region, he also took the opportunity to shine on a light on human rights abuses—especially those occuring in North Korea.

Between President Trump’s human rights-focused speech before the South Korean National Assembly and Tillerson’s visit to Burma, there is some hope that the administration will prioritize both national security and human rights issues in crafting U.S. policy toward Asia.

The ethnic cleansing element of the Rohingya crisis has garnered significant attention. Less discussed is the heart-wrenching sexual violence against women. Human Rights Watch today issued a ground-breaking report based on interviews of 52 Rohingya women who had fled to Bangladesh.

Twenty-nine of these women interviewed had been raped—all but one of them gang-raped. All reported their rapists wore Burmese military uniforms.

Many of the 52 women interviewed recounted having to watch their children or other family members beaten or killed before their own eyes—sometimes while they were enduring sexual abuse. The pattern emerging from the data collected by Human Rights Watch suggests that the Burmese military is using sexual violence as a tactic to intimidate and ultimately drive Rohingya women out of the country. 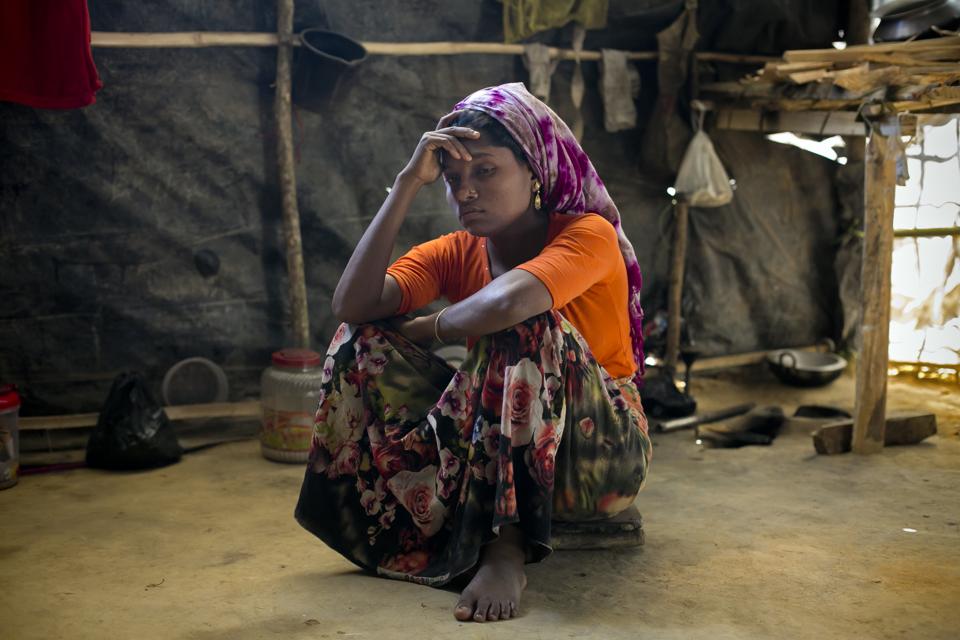 COX'S BAZAR, BANGLADESH - JANUARY 20: Jamalida Begum is seen in her makeshift house that she shares with 6 other refugees on January 20, 2017 in Kutalong Rohingya refugee camp in Cox's Bazar, Bangladesh. (Photo by Allison Joyce/Getty Images)

Ethnic cleansing and sexual violence create tremendous needs among the survivors. The U.S. government has responded well in the short-term, increasing humanitarian aid and assistance for refugees in the immediate aftermath of the crisis. But the U.S. role may change as the crisis becomes protracted.

Given the scale of the mass exodus, many Rohingya may flee to other countries, rather than stay in Bangladesh. Another Southeast Asian migrant crisis may transpire once the weather improves and the seas are safe to travel once again. This will create additional vulnerabilities, exposing the refugees to human smuggling rackets, human traffickers, and death at sea. Such a crisis will require a regionally-coordinated strategy to reduce the risk of more expansive migration.

In Burma, Secretary Tillerson signaled that U.S. leadership intends to help ensure justice for Rohingya victims of ethnic cleansing. Such leadership may necessitate a shift in U.S. policy toward Burma.

Tillerson clearly favors instituting  targeted financial measures against perpetrators of violence against Rohingya, rather than blanket sanctions against Burma. Any sanctions levied against malefactors in Burma would be a change in direction for U.S. policy, especially since the Obama administration lifted sanctions against Burma after 2015 elections brought Aung San Suu Kyi and the National League for democracy to power.

The U.S. should continue to promote freedom in Burma and call for investigations into the violence committed against Rohingya. Just as persecution of Rohingya has long roots, U.S. leadership on human rights must be a long-term priority—especially if the U.S. hopes to maintain the warm relationship it was developing with Burma.

How Taiwan Can Be Trusted Partner of 3 Seas Initiative

How To Counter Iran’s Growing Ties to China