Testimony before the Committee on Science, Space, and Technology on June 24, 2015

Chairman Smith and Members of the Committee, thank you for inviting me to testify. My name is Kevin Dayaratna. I am the Senior Statistician and Research Programmer at The Heritage Foundation. The views I express in this testimony are my own and should not be construed as representing any official position of The Heritage Foundation.

For years, it has been a primary goal of the Obama Administration to fundamentally expand regulations across the energy sector of the economy. The Administration’s primary justification for doing so is to limit carbon-dioxide emissions as they believe such emissions contribute to global warming.[1]

Over the course of my work at The Heritage Foundation, I have rigorously used the National Energy Modeling System (NEMS), having conducted a variety of simulations looking at similar policy proposals ranging from a nationwide carbon tax to shutting down the coal industry. The Energy Information Administration’s (EIA’s) analysis of the Clean Power Plan (CPP), based on their use of NEMS, suggests that the Plan will have economic impact similar to that of these proposals.[2] These policies will almost surely do far more harm than good by stifling the American economy, killing jobs, and having negligible environmental benefits.

Impact of the Clean Power Plan on the Economy

There is broad economic agreement that any governmental policies to limit carbon-dioxide emissions will have detrimental economic impact throughout the nation. This fact has not only been discussed by myself and colleagues at The Heritage Foundation, but also by those within the EIA as well as other policy experts in Washington.[3] Below, for example, are nationwide impacts on manufacturing employment of the four primary policy simulations run by the EIA in their report, “An Analysis of the Clean Power Plan,” with respect to current policy:[4] 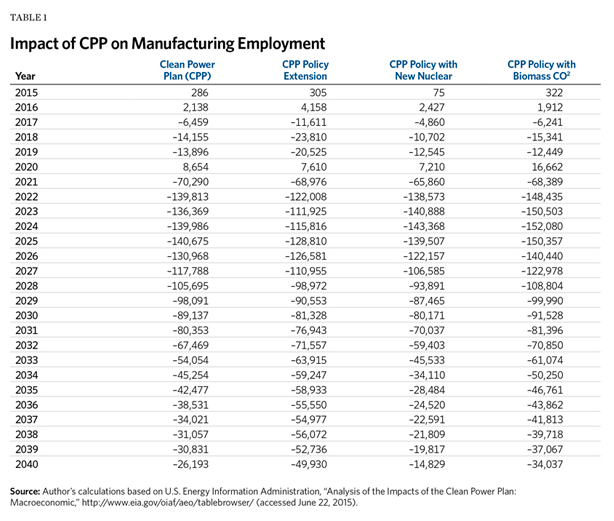 Below are the projections of the CPP on overall employment as well as the country’s gross domestic product (GDP): 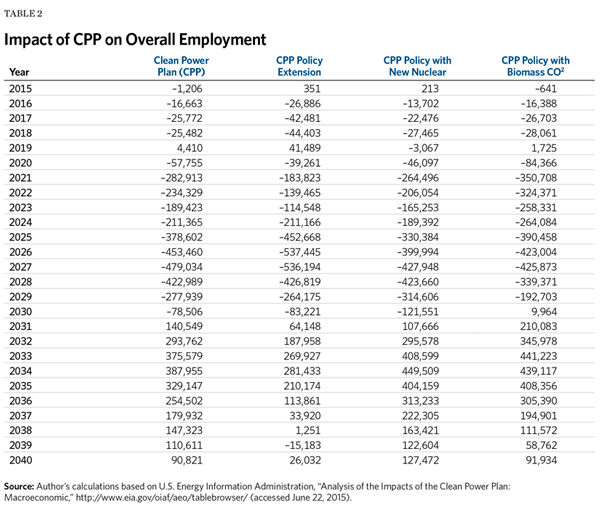 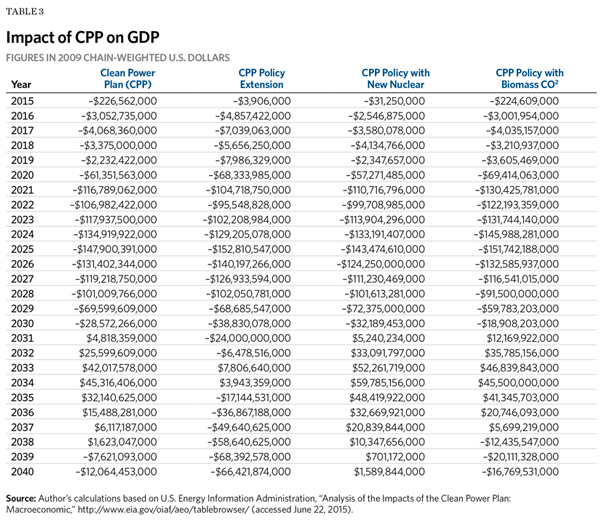 There are a few important things to note here. First, we see a precipitous decline in employment in the subsequent decade. Although some of the policy situations note a slight uptick in employment after 2030, overall employment never truly recovers and neither do GDP nor household income.

Additionally, in their report, the EIA notes that these changes to GDP are “equivalent to changes of a few tenths of one percent from the baseline given the magnitude of GDP and disposable income accumulated over the 2015–2040 period.”[5] Although this percentage is seemingly small, it does represent a significant impact on the economy, as illustrated by the impact of the plan on a family of four: 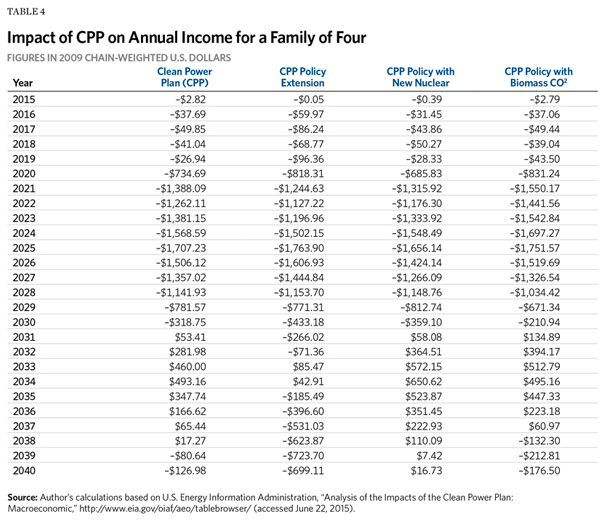 These calculations clearly illustrate the detrimental impact that the CPP will have on the American households. In 2025 for example, the average family of four will lose nearly $2,000 in income.

The EIA’s analysis of the CPP suggests that residential electricity prices will increase as a result of the policy. The table below illustrates comparisons of annual household electricity expenditures based on the EIA’s four primary simulations regarding the CPP compared to their reference case:[6] 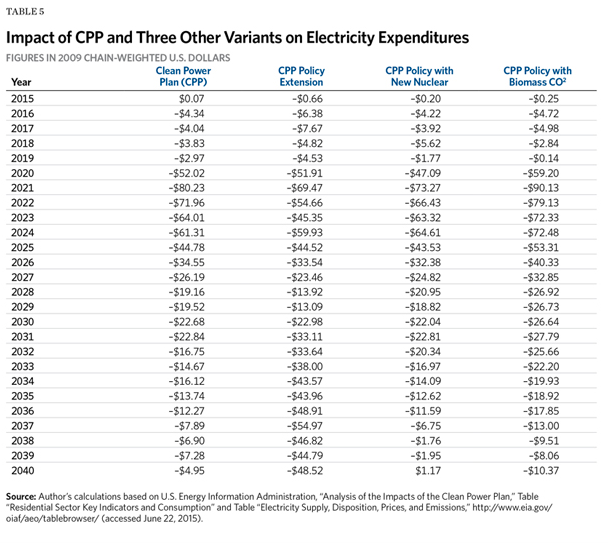 These increases result from the fact that the CPP will stifle the use of the least expensive forms of energy and force Americans toward using more expensive, less efficient alternatives. They indicate that the CPP would significantly impact household electricity prices across the residential sector, not just households that consume a significant amount of electricity. These higher electricity prices will have to be paid for with the already lost income described in the previous section.

There is no doubt that the regulations contained within the CPP will be burdensome to the American economy. The primary justification that the Obama Administration has used for instituting these regulations has been the social cost of carbon (SCC). As we have illustrated in our research at The Heritage Foundation, the models used to estimate the SCC are “flawed beyond use for policymaking,” with extreme sensitivity to reasonable changes to assumptions.[7] Even if all carbon-dioxide emissions were brought to (literally) zero in the United States, global temperatures would change by less than 0.2 degrees Celsius. Completely eliminating all carbon-dioxide emissions in all industrialized countries across the globe would fail to reduce global temperatures by more than half of a degree Celsius.[8] With significant economic damage and limited benefit, there is no reason for policymakers to institute these types of regulations.

The Clean Power Plan institutes a series of burdensome regulations that provide little environmental benefits but significantly damage the American economy. Allowing free markets to determine prices and choices in the energy sector of the American economy, not the dictates of bureaucrats in Washington, will provide us with more affordable energy and a clean, healthy environment.[9]

[4] Results were downloaded from the U.S. Energy Information Agency’s AEO table browser, http://www.eia.gov/oiaf/aeo/tablebrowser/ (accessed June 19, 2015). CPP is the Base Policy, CPPEXT is their Policy Extension, CPPNUC is the Policy with New Nuclear, and CPPBIO195 is The Policy with Biomass CO2 as described in Energy Information Administration, “EIA’s Analysis of the Impacts of the Clean Power Plan.”

What You Need to Know About Biden’s Climate “Emergency”