The combined Social Security and Disability Insurance programs, known as OASDI, are projected to remain solvent—that is, they are expected to have enough revenue from payroll taxes, interest on the Trust Fund balance, and repayment of borrowed Trust Fund dollars to pay out scheduled benefits—through 2033.[3] This is the same date as projected in last year’s report.

If no action is taken to improve Social Security’s solvency before its Trust Fund runs dry, benefits will be reduced across the board by 23 percent.

In 2033, the combined OASDI Trust Fund will be exhausted, and the programs will be able to pay only three-fourths of scheduled benefits. While the programs are considered solvent until that year, this is true only on paper. Social Security and Disability already add to budget deficits.

Social Security’s cash-flow deficits add to the public debt because those deficits are covered by drawing down interest payments from the U.S. Treasury on previous Trust Fund borrowing. Cash-flow deficits mean the Treasury can no longer cover interest payments to the OASDI Trust Fund by issuing additional IOUs; instead, it must produce actual cash from taxes or borrowing. Thus, Social Security and Disability are adding to today’s deficits on a cash-flow basis.

In the past, when Social Security ran cash-flow surpluses, the federal government spent those surpluses on other federal spending, and in return, the Treasury credited Social Security’s Trust Fund with special-issue government securities. Although this $2.8 trillion in securities is not counted in the total amount of debt held by the public, it represents real debt that will have to be repaid over the coming decades, according to current law.[4]

The Social Security Trust Fund represents legitimate repayments plus interest, but this distinction has no bearing on the federal budget’s bottom line. Imagine a family that sets aside money for a child’s college education but then borrows all of that money for other spending. Once the time for college arrives, the family will have to scramble to pay tuition because the IOUs in the college account represent money the family must pay itself.

So it is with Social Security’s Trust Fund. Congress spent all the excess revenues when Social Security was running surpluses, and now repaying those revenues is adding to deficits.

How Accurate Is the 2033 Prediction?

According to the 2014 trustees’ report, the combined Social Security and Disability Insurance Trust Fund will remain solvent through 2033, but if history is any indicator, insolvency could come much sooner. As recently as 1983, the Social Security trustees projected, “On the basis of all but the most pessimistic of the four sets of assumptions used, the program is now estimated to be financially sound over the next 75 years.”[5] That would have been 2058 or later. Three decades later, the projected insolvency date is now 25 years sooner. As a Heritage Foundation report shows, if that trend continues, the Social Security Trust Fund would be insolvent nine years sooner than currently projected—in 2024 rather than 2033.[6] 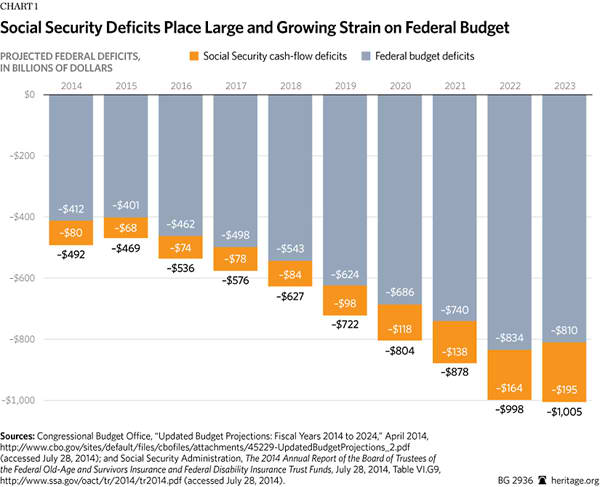 As Social Security has shifted from a program to protect the elderly from poverty to a potential decades-long income subsidy, current workers and younger generations will inevitably bear the burden of Social Security’s drain on the federal budget. Raising payroll taxes on today’s and tomorrow’s workers to cover Social Security’s funding shortfall would only add to their burden. 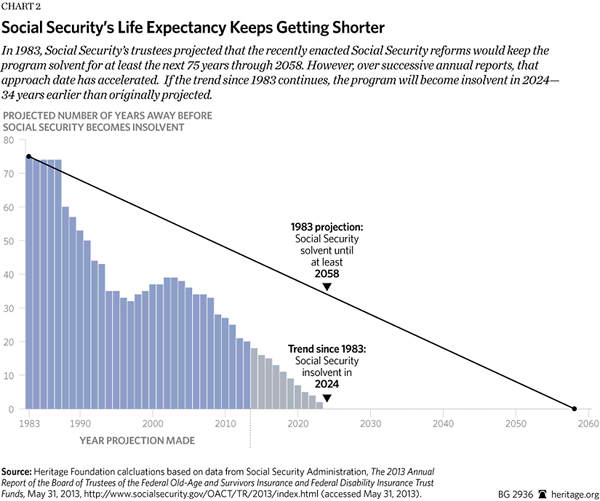 The sooner lawmakers act to address Social Security’s massive and growing cash-flow deficits, the lower the burden will be on current and future workers. Three important reforms could help solve Social Security’s financial shortfall and shift the program back toward its original purpose of protecting seniors against poverty:

Despite being solvent for about two more decades, the Social Security and Disability Insurance programs are already contributing to annual deficits. Absent reform, Social Security benefits will be cut across the board by 23 percent in 2033. Action should be taken today to protect Social Security’s most vulnerable beneficiaries from such drastic cuts without burdening younger generations through tax increases.

Lawmakers should immediately replace the current COLA with the more accurate chained CPI, raise the early and full retirement ages gradually and predictably, focus Social Security benefits on those who need them most, and alleviate poverty in old age with a minimum flat benefit.

[2] Today, the trust fund holds $2.8 trillion in government securities, and it will be exhausted by 2033. The 75-year shortfall between already promised benefits and expected payroll tax revenues is $10.6 trillion, but paying the IOUs in the Trust Fund will also draw from general fund revenues, bringing the true 75-year OASDI unfunded obligation to $13.4 trillion.

[3] The Social Security Trust Fund (OASI) is projected to remain solvent through 2034, while the Disability Trust Fund (DI) will run dry in 2016. In the absence of reform, DI program benefits would have to be reduced or eligibility limited beginning in less than two years. If lawmakers chose to reallocate the distribution of OASI and DI payroll taxes to boost DI solvency, it would weaken OASI solvency.

[8] See Romina Boccia and Rachel Greszler, “Social Security Benefits and the Impact of the Chained CPI,” Heritage Foundation Backgrounder No. 2799, May 21, 2012, http://www.heritage.org/research/reports/2013/05/social-security-benefits-and-the-impact-of-the-chained-cpi.

[10] Mark Duggan and Scott A. Imberman, “Why Are the Disability Rolls Skyrocketing? The Contribution of Population Characteristics, Economic Conditions, and Program Generosity,” chap. 11 in David M. Cutler and David A. Wise, eds., Health at Older Ages: The Causes and Consequences of Declining Disability Among the Elderly (Chicago: University of Chicago Press, 2009), pp. 337–379.