The Social Security OASI program is projected to reach insolvency in 2035. This means that the program is expected to have only enough revenue from payroll taxes, interest on the Trust Fund balance, and repayment of borrowed Trust Fund dollars to pay out scheduled benefits until 2035. This is one year later than projected in last year’s report.[3]

If no action is taken to improve Social Security’s solvency before its Trust Fund runs dry, benefits will either be delayed or reduced across the board by 23 percent. Congress should avoid indiscriminate benefit cuts which would harm the most vulnerable beneficiaries the most by adopting commonsense reforms that modernize the outdated Social Security program.

In the past, when Social Security ran cash-flow surpluses, the federal government spent those surpluses on other federal spending, and in return, the Treasury credited Social Security’s Trust Fund with special-issue government securities. Although this $2.73 trillion in securities is not counted in the total amount of debt held by the public, it represents real debt that will have to be repaid over the coming decades, unless Congress changes current law.[4]

The Social Security Trust Fund represents legitimate repayments plus interest, but this distinction has no bearing on the federal budget’s bottom line. Congress spent all the excess revenues when Social Security was running surpluses, and now repaying those revenues is adding to deficits. As Chart 1 shows, shortfalls in Social Security’s programs represent a considerable portion of current and future deficits. 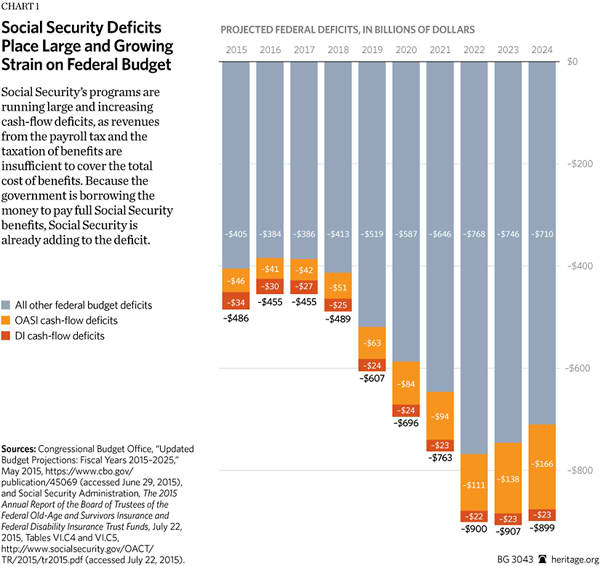 Nevertheless, Congress may change current law at any time, including by eliminating the Social Security Trust Fund. Funds earmarked for OASI through its Trust Fund do not represent accrued property rights, even though these funds come from taxing workers’ wages. Congress’s authority to modify the Social Security program was affirmed in the 1960 Supreme Court decision in Flemming v. Nestor, wherein the Court held that individuals do not have a “property right” to their Social Security benefits, regardless of how many years they paid payroll taxes.[5]

The Congressional Budget Office (CBO) analyzed how large of a payroll tax increase would be necessary, absent benefit reforms, to ensure Social Security’s on-paper solvency for the next 75 years. The CBO identified that the payroll tax would have to be permanently increased immediately from 12.4 percent to 15.9 percent—a nearly one-third increase—to ensure the solvency of Social Security’s combined Trust Funds (OASI and disability insurance).[6] 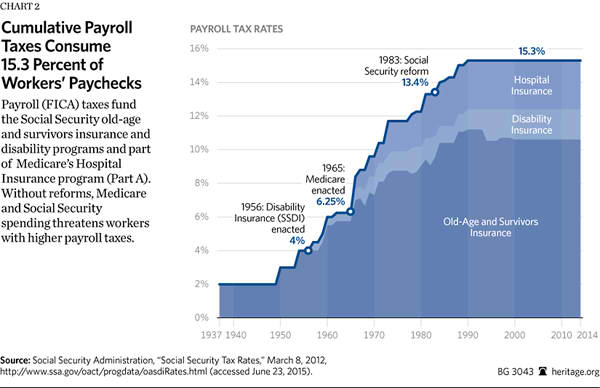 This substantial tax increase would harm those whom Social Security is intended to benefit the most. Under the 15.9 percent rate, someone earning $50,000 would pay an additional $1,750 per year in payroll taxes (half paid by his or her employer, unless the person is self-employed). This increase would put significant strain on middle-income and lower-income earners and would exacerbate the payroll tax’s disincentives to work.[7] The tax increase would also disproportionately fall on younger Americans. While lifetime payroll taxes would increase by 6 percent to 9 percent for those born in the 1960s, the new rate would amount to a 27 percent lifetime increase in payroll taxes for Americans born after 2000.[8] Moreover, a payroll tax increase would leave workers with even fewer resources to spend or save in accordance with their own needs and desires.

Had Congress eliminated the cap in 2015, workers earning $150,000 would have experienced a 27 percent payroll tax increase, amounting to an extra $3,906 on their tax bills. A single-earner family with $250,000 income would pay $16,306 more in payroll taxes—more than doubling their current payroll tax burden.[9] This tax hike would be in addition to income taxes, which already disproportionately tax high-income earners. Moreover, this option would generate surpluses in the early years of adoption, which Congress would immediately spend, thus generating largely on-paper savings without markedly improving future deficits. Empirical evidence suggests that Social Security surpluses, rather than being saved, have gone toward higher spending or lower tax revenues than would have otherwise been the case.[10] Thus, options that create temporary Social Security surpluses merely give the appearance, on paper, of financial improvement in Social Security.[11] 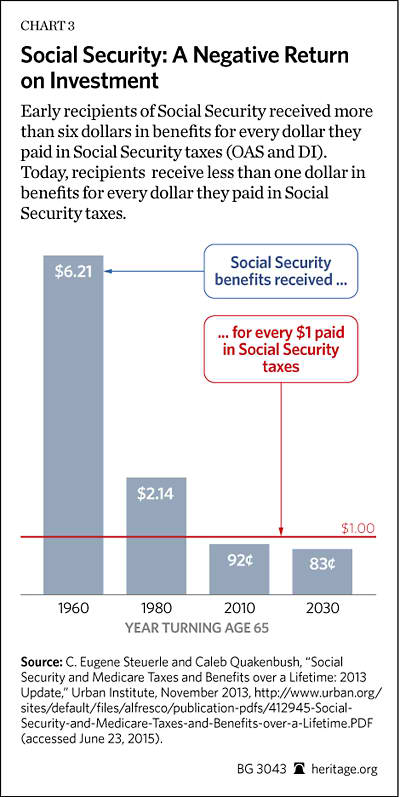 As Social Security has shifted from a program to protect the elderly from poverty to a potential decades-long income subsidy, current workers and younger generations will inevitably bear the burden of Social Security’s drain on the federal budget. Raising payroll taxes on today’s and tomorrow’s workers to cover Social Security’s funding shortfall would further add to their burden, while also harming the economy.

The sooner lawmakers address Social Security’s massive and growing cash-flow deficits, the lower the burden will be on current and future workers. Four important reforms could help resolve Social Security’s financial shortfall and return the program to its original purpose of protecting seniors against poverty. Congress should:

Social Security is approaching insolvency in less than 20 years. The largest and growing federal entitlement program is increasingly contributing to annual deficits. Absent reform, Social Security benefits will be cut across the board by 23 percent in 2035. Action should be taken this year to protect Social Security’s most vulnerable beneficiaries from such drastic cuts without burdening younger generations with higher taxes or unsustainable debt. Lawmakers should immediately replace the current COLA with the more accurate chained CPI, raise the early and full retirement ages gradually and predictably, focus Social Security benefits on those who need them most, and enable more Americans to save for the future in private retirement accounts.

[1] U.S. Social Security Administration, The 2015 Annual Report of the Board of Trustees of the Federal Old-Age and Survivors Insurance and Federal Disability Insurance Trust Funds, July 22, 2015, http://www.socialsecurity.gov/OACT/TR/2015/tr2015.pdf (accessed July 22, 2015).

[13] Romina Boccia and Rachel Greszler, “Social Security Benefits and the Impact of the Chained CPI,” Heritage Foundation Backgrounder No. 2799, May 21, 2012, http://www.heritage.org/research/reports/2013/05/social-security-benefits-and-the-impact-of-the-chained-cpi\.

[15] Mark Duggan and Scott A. Imberman, “Why Are the Disability Rolls Skyrocketing? The Contribution of Population Characteristics, Economic Conditions, and Program Generosity,” chap. 11 in David M. Cutler and David A. Wise, eds., Health at Older Ages: The Causes and Consequences of Declining Disability Among the Elderly (Chicago: University of Chicago Press, 2009), pp. 337–379.