Agricultural special interests try to make it sound as though touching even one farm subsidy—regardless of how unreasonable the subsidy is—will be the end of agriculture as we know it.

Using scare tactics, they will assert wild claims without any support, or they will cherry-pick data to provide a misleading picture. For example, they often point to declines from record or near-record highs.

The following provides answers to some common claims made by the special interests.

The wealth numbers are even more staggering. The median farm household had wealth ($897,000) that was more than nine times greater than the wealth of all U.S. households ($97,300).

This isn’t to say that every farm household is doing well, nor does it mean that if a household engages in farming that they will make money from farming. However, these numbers do certainly show that farmers as a whole are certainly not struggling.

It is true, though, that the farm economy isn’t setting records like it did just several years ago. For example, net farm income was at a record high in 2013. However, pointing out that net farm income has taken a major drop since that record year is cherry-picking data and very misleading.

In addition to the incredible income and wealth of farm households, key financial indicators such as debt-to-asset ratios are near historic lows (see Chart 1). 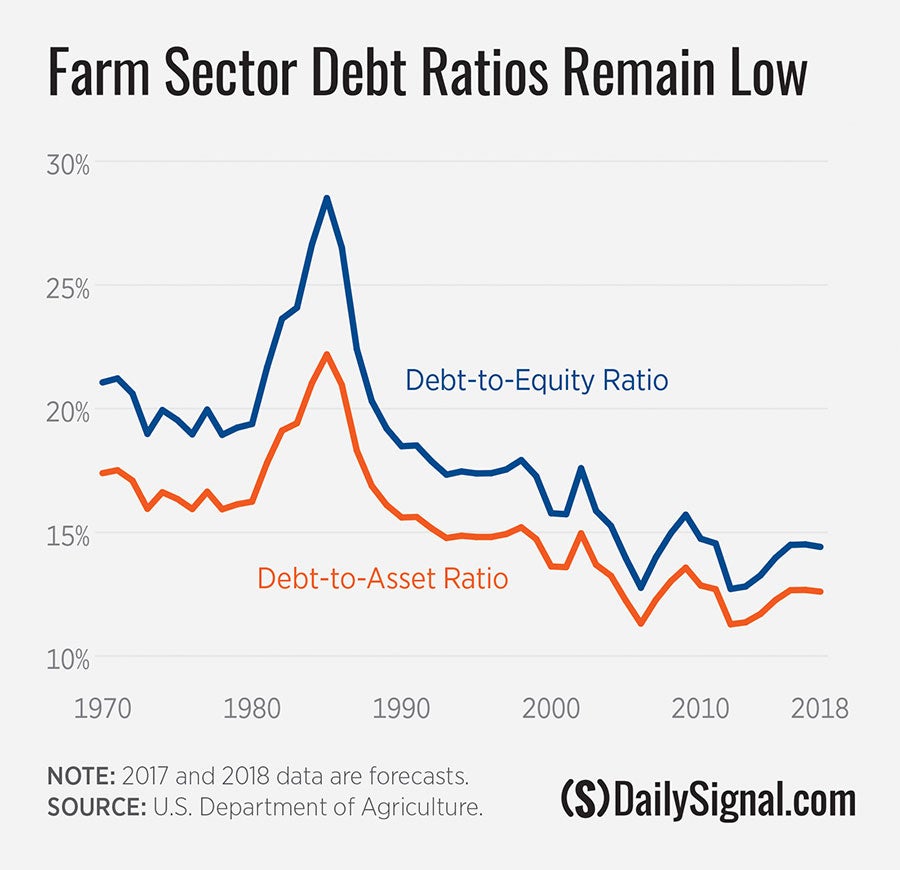 Claim: The rural economy is hurting.

Reality: That may be true, but it has little to do with the farm economy. It is important not to conflate the two.

Rural America is far more diverse than merely farming. In fact, only about 6 percent of rural jobs are in farming.

In a literature review on farm payments and rural America, agricultural researchers Joe Outlaw and Roland Fumasi correctly explain, “What most people fail to realize is that in many cases, production agriculture is no longer the economic engine in most rural U.S. counties.”

Reality: In 2016, small family farms accounted for 89.9 percent of all farms, yet received 27 percent of commodity payments and 17 percent of crop-insurance indemnities.

In contrast, commercial farms, which include the largest family farms, accounted for just 10.1 percent of all farms, yet received 73 percent of commodity payments and 83 percent of crop-insurance indemnities.

Reality: Family farms are not disappearing. In fact, family farms account for about 99 percent of all farms. Further, the total number of farms in the U.S. has remained stable since the 1980s at about 2.1 million.

“Family farm” is not a synonym for “small farm.” In fact, 90 percent of million-dollar farms were family farms in 2015. They also account for about90 percent of farm production.

Reality: It is very difficult to claim that farmers and the agricultural sector as a whole need subsidies for national security reasons, when the subsidies are primarily serving a small segment of agriculture.

There are entire sectors of the farm economy, such as livestock and specialty crops (fruits, vegetables, nuts), that receive little to no subsidies, especially when it comes to revenue-protecting subsidies.

The Congressional Research Service released an important report showing that, from 2014 to 2016, just six commodities (corn, wheat, soybeans, cotton, rice, and peanuts) received 94 percent of the farm program support, but these six commodities accounted for only 28 percent of farm receipts.

There are no national security problems for almost all commodities that receive little to no subsidies.

Former American Farm Bureau Federation President Bob Stallman captured the subsidy issue well. As the Washington Post reported: “Stallman dismisses outright the claim that farmers couldn’t survive without subsidy money. ‘Why does the livestock industry survive without subsidies?’ he asks. ‘Why does the specialty crop [fruit and vegetable] industry survive?’”

This national security claim is merely an assertion without any evidence, much less an explanation as to what precise problem the subsidies are even addressing.

Those making this claim can’t point to even a single case anywhere in the world where a security crisis arose because agricultural producers didn’t get the subsidies as they wanted.

Actually, there’s an excellent example showing just the opposite; namely, the benefits of removing virtually all subsidies. That would be New Zealand. Its agricultural sector has flourished since major reforms in the 1980s.

The Federated Farmers of New Zealand declared that they “are proud of their independence and are determined never again to be dependent upon government subsidies.”

Further, if the U.S. genuinely did have national security concerns, why would conservatives ever think that the solution is more government, and not a free market?

Yet, the current subsidy system distorts the market and encourages farmers to make some planting decisions not based on needs and demand, but on maximizing subsidies. How is that serving national concerns?

Claim: Farmers need subsidies because other countries provide subsidies to their farmers.

Reality: If this were true, how does it explain all the U.S. commodities that don’t receive subsidies? If one thinks cronyism is bad now, imagine if every domestic industry received subsidies because other countries provided subsidies.

There’s no question that subsidies provided by other countries should be a concern. The solution, though, isn’t to make matters worse by creating our own subsidies.

There are other ways to address subsidies, as domestic agricultural special interests should know all too well.  For example, Brazil went to the World Trade Organization and won its challenge to U.S. trade-distorting cotton subsidies.

To avoid trade retaliation, taxpayers have had to shell out $800 million to the Brazilian cotton industry to settle long-standing cotton trade disputes with Brazil.

The tit-for-tat mentality completely ignores the harm imposed by subsidies and merely looks at how it props up a narrow industry and not how it affects anyone else.

The federal sugar program is a prime example.  To help a small number of sugar growers and harvesters, this subsidy scheme hurts consumers and the sugar-using industry by driving up sugar prices.

Claim: The farmer gets a bill, not a check, with crop insurance.

Reality: The farmer gets major financial assistance from taxpayers, who pay a whopping 62 percent of the premium subsidies for crop insurance.

If we want to talk about bills, taxpayers get a much bigger bill than farmers, and unlike farmers, they don’t get any indemnities.

This excessive assistance on premiums is why there is wide support for reducing the premium subsidy to a reasonable level that would save taxpayer dollars while having little impact on farmers.

Claim: The federal sugar program is a no-cost program.

Reality: Tell that to consumers, who pay up to $3.7 billion a year more than they otherwise would because of the program, and to the sugar-using industry.

A Department of Commerce report highlighted the cost of the sugar program, including high domestic sugar prices and lost jobs. According to the report, “For each sugar-growing and harvesting job saved through high U.S. sugar prices, nearly three confectionery manufacturing jobs are lost.”

The program also has a disproportionate impact on the poor. 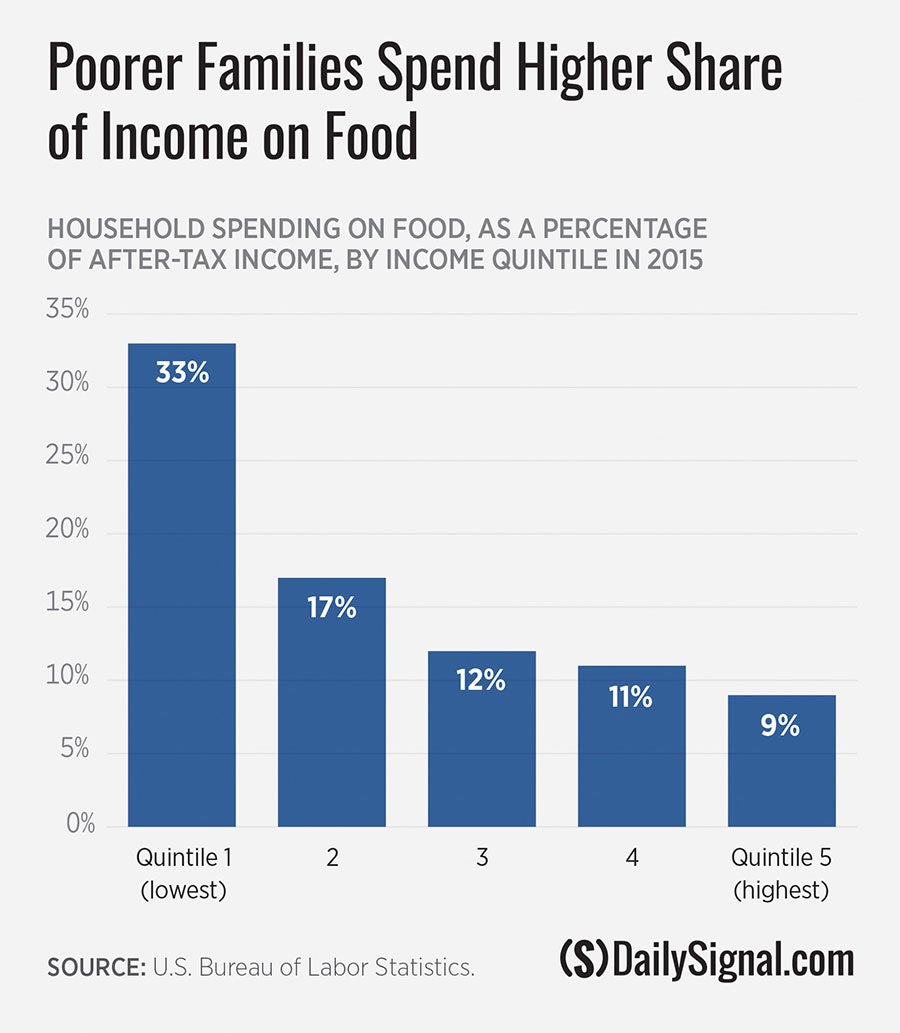 Conservatives believe in markets, freedom, and individual liberty. They oppose central planning and crushing regulatory burdens. Basically, they believe in everything that the out-of-control farm-handout system isn’t.

Conservatives need to make major reforms to farm subsidies that are consistent with conservative principles, not maintaining the status quo (or worse), which is the very antithesis of what they say they believe.