The 2017 March for Life marked a historic moment when, for the first time since its inception in 1974, the Vice President of the United States of America attended and addressed the participants. During his remarks, Vice President Mike Pence stated, “Life is winning again in America.”

The March for Life is the world’s largest annual peaceful protest against abortion, drawing huge crowds of people from across the country and even around the world to Washington, D.C., every January to mark the anniversary of the tragic Roe v. Wade decision. As President of the March for Life, I have the unique opportunity every year to walk out on stage a moment before the rally program begins and gaze at a sea of youthful, smiling faces. The crowd keeps going and going, farther than I can see. Marchers carry signs with positive, optimistic messages: “Peace begins in the womb” or “I am the pro-life generation.” The crowd is full of young adults, teenagers and children; they are happy and hopeful and—in their words—plan to “abolish abortion.” This moment always takes my breath away and leaves me with a profound sense of hope.

Seeing the young people at the March for Life is definitely a glimpse of victory for the cause of life. I am not the only person to be affected by such a sight. A few years ago, Nancy Keenan, then President of NARAL Pro-Choice America, the organization that helped to legalize abortion nationwide, was also deeply moved by the witness of the young marchers. Newsweek quoted her at the time as saying, “I just thought, my gosh, they are so young. There are so many of them, and they are so young.”1 She resigned her position shortly thereafter, stating that they needed to do a better job of marketing to a younger generation.2

But more than crowds at the March for Life shows that life is winning. One such sign is the increase in pro-life legislation at the state level. Since 2010, hundreds of laws have been enacted incrementally limiting abortion in various states. These laws range from parental consent and notification; to prohibiting certain late term abortion procedures; to providing informed consent to mothers; to requiring only physicians to perform abortions, and many more. Such incremental pro-life laws typically enjoy broad popular support.3

Consider another indicator that public opinion is moving in the direction of life. A recent poll revealed that eight out of 10 Americans would limit abortion to—at most—the first three months of pregnancy.4 Most Americans (six out of 10) believe that abortion is morally wrong, and the majority of Americans (61 percent) do not support taxpayer funding for abortion.5

Many factors influence public opinion on the topic of life, including the developing ultrasonography technology that provides a “window” into the womb at a very early stage of life. In 2013, before the 40th March for Life marking the solemn anniversary of 40 tragic years of Roe v. Wade, Cardinal Timothy Dolan, the Archbishop of New York, dubbed the millennial generation the “ultrasound generation” because of the role of such technology in influencing their views on unborn children. Ultrasound images make it difficult to deny that an unborn baby is a human being, not a lifeless mass of tissue. Placards depicting ultrasounds and articulating other science-based and medical-based pro-life arguments are some of the most popular at the March for Life.

Life is also winning because abortion-providing facilities continue to decrease. In 1992, the number of facilities in the U.S. was 2,380 nationwide. In 2014, the number had fallen to 1,671.6 Conversely, pregnancy care centers continue to grow and currently number over 2,000.7 Pregnancy centers are staffed primarily by volunteers and, unlike abortion clinics, are not financially profitable. They seek to help women facing an unexpected pregnancy, offering genuine alternatives to abortion.

These factors are contributing to the most important data point of all: lives being saved. The abortion rate continues to decline as the accompanying chart shows. Similarly, the actual number of abortions continues to decrease gradually every year.

There are many signs that life is indeed winning in the United States, and this is cause for celebration. At the same time, acknowledging that each abortion takes the life of one and wounds another and that any abortion is one too many, we undoubtedly have much more work ahead of us. So we persevere, continuing to build a culture of life one step at a time in the great March for Life. That march has drawn us together in Washington, D.C., for 44 years. We will continue to march until abortion has become unthinkable in the United States.

Jeanne Mancini is President of the March for Life Education and Defense Fund. 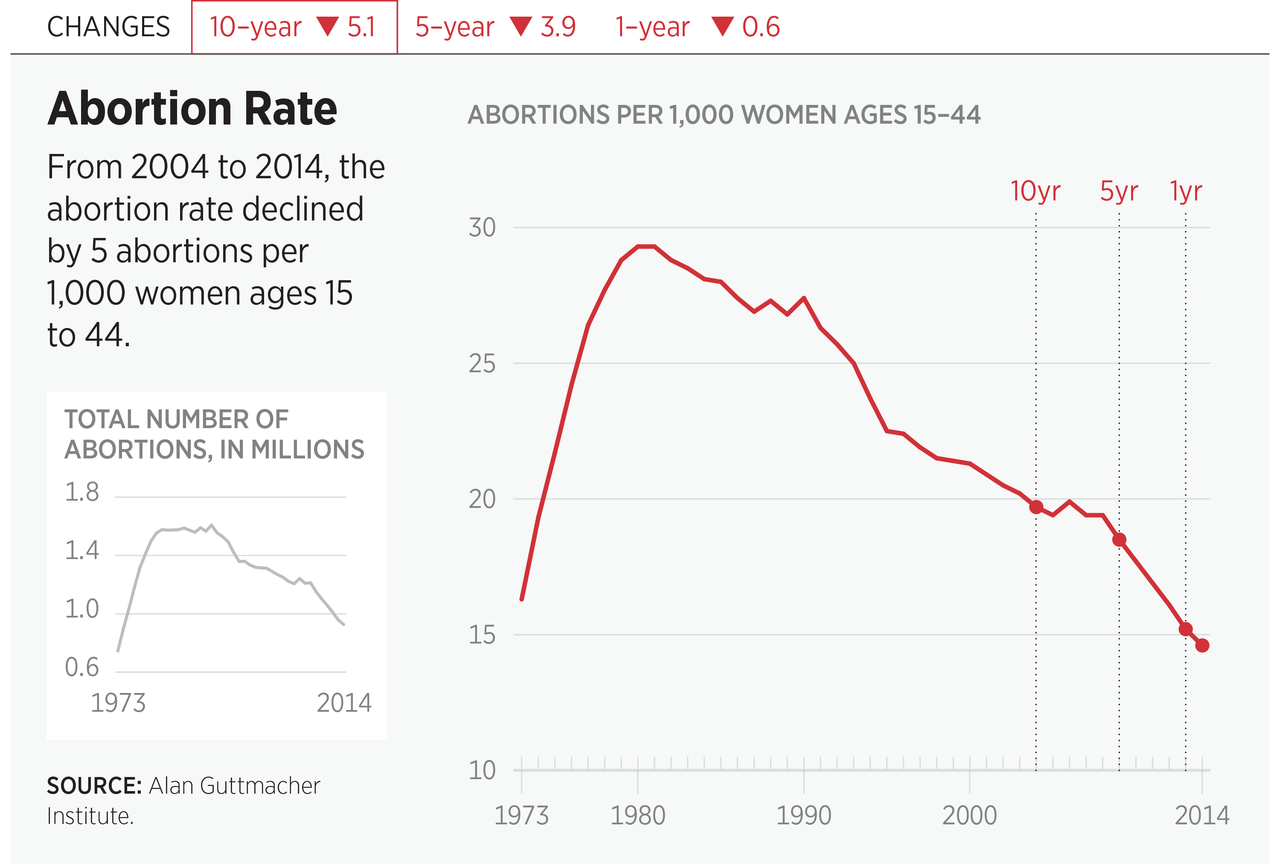