A Public Health Crisis Is No Time for Private Pension Bailouts

A Public Health Crisis Is No Time for Private Pension Bailouts

A private pension bailout as a “solution” for the current situation is both ironic and disturbing.

Virtually no American has been unaffected by the COVID-19 health emergency.

Anything that is not related to the COVID-19 crisis—such as a pension bailout—should have zero standing.

Now is the time to address the COVID-19 crisis, not throw money at decades-long problems.

House Democrats’ inclusion of a massive taxpayer bailout for a select group of multiemployer, or union pension plans in their most recent 1400-page pork-filled COVID-19 legislative package flies in the face of 60% of U.S. households that have suffered significant retirement account losses of their own with the stock market’s roughly 25% COVID-19 tumble.

A private pension bailout as a “solution” for the current situation is both ironic and disturbing.

The Rehabilitation for Multiemployer Pension Plans Act, which the House of Representatives passed in July of 2019, would initially give more than $70 billion in taxpayer dollars to about 10% of the most underfunded multiemployer pension plans, allowing them to keep paying 100% of their massively over-promised and underfunded pension benefits.

In addition, those highly insolvent plans would receive over $40 billion in taxpayer-backed loans that they could invest in the stock market.

The notion here is essentially that plans could arbitrage low-interest taxpayer-backed loans into higher-risk investments, such as stocks, to improve their plan funding.

Not surprisingly, considering these are loans to insolvent entities, the Congressional Budget Office estimated a roughly 80% default rate, with the overwhelming majority of plans receiving assistance still becoming insolvent.

The recent market decline shows precisely why it’s absolutely inappropriate to use taxpayer dollars to invest in the market—especially in an attempt to dig out of debt.

Had the bill actually passed and $32 billion in loans been distributed to plans and invested in the market in January of this year, taxpayers would already be $8 billion in the hole.

In the end, if Congress extends a pension bailout to all union pension plans, it could cost taxpayers well beyond the $638 billion in multiemployer pension underfunding (that is more likely in the $700-$800 billion range today).

And then there’s $4 trillion to $6 trillion in state and local underfunded pension plans. If Congress bails out private sector plans, how can it say no to retired policemen, firefighters, and teachers?

All told, a pension bailout could cost every household in America as much as $52,000. 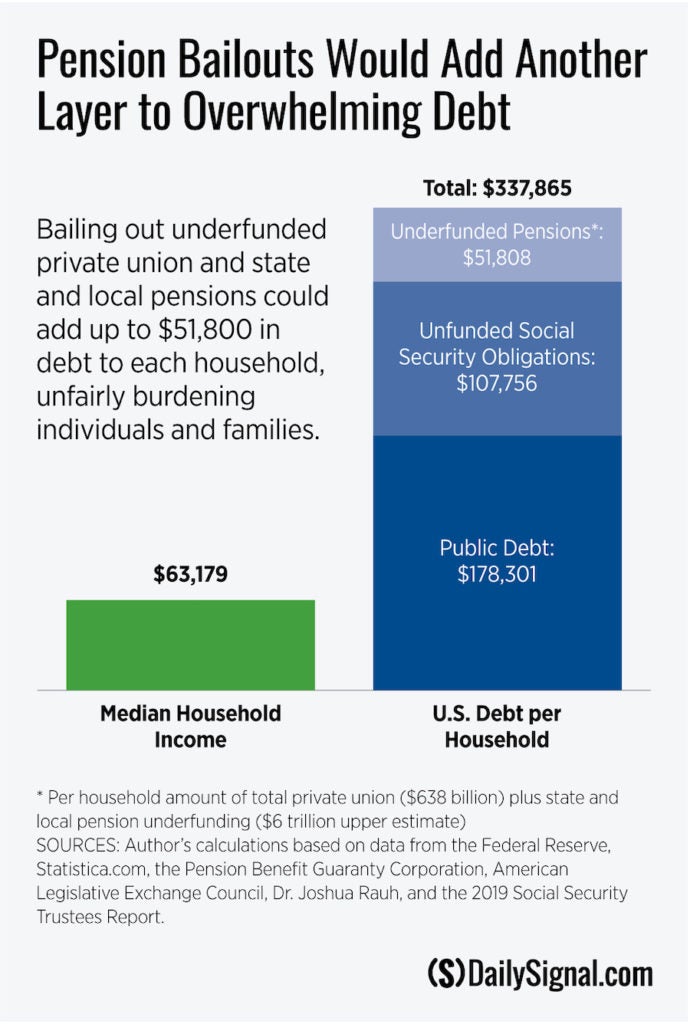 And unlike the support certain individuals and businesses need because of COVID-19, caused through no fault of their own, pension bailouts would reward and encourage reckless behavior.

Pension managers—including politicians, union officials, and employer representatives—consistently over-promised and under-funded pension benefits, and have done little if anything to correct for their shortcomings over time; such mismanagement is tragic for workers and retirees who did nothing wrong and action must be taken to help protect pensioners.

Virtually no American has been unaffected by the COVID-19 health emergency.

Some people have lost their jobs and incomes entirely, others are struggling to get by on reduced incomes, businesses are trying to hang on and weather the storm, and investors (including ordinary Americans with retirement accounts) are wondering when, and to what extent, their accounts will recover.

Considering the widespread financial concerns among Americans, it’s insulting that certain policymakers are trying to take advantage of a public health crisis to bail out a select group of private union pension plans.

Congress should immediately address the COVID-19 emergency with targeted and temporary provisions directed at public health efforts, and at maintaining workers’ incomes and employment.

Anything that is not related to the COVID-19 crisis—such as a pension bailout—should have zero standing.

The pension situation is dire, and once the COVID-19 emergency has passed, Congress should protect pensioners and taxpayers by maintaining the solvency of the government’s Pension Benefit Guaranty Program and by enforcing proper funding rules to hold employers and unions liable for the benefits they promise.

Federal Employee Vaccine Mandate Could Result in Thousands of Firings