Ambassador Terry Miller focuses on research into how free markets and international trade foster economic growth around the world.

The 2020 Index of Economic Freedom shows a world more committed to the principles of free-market capitalism than ever before.

Some 124 of the 180 countries ranked in the index managed improvements in their economic freedom scores this year.

The average score in the index is at its highest level in history, and the commitment to free-market reform is stronger than ever.

Governments around the world are responding to the coronavirus epidemic with a variety of measures that have the potential to curtail economic activity.

It’s vital that such actions be temporary and of as short a duration as possible.

Government restrictions and regulations have a tendency to outlast—sometimes for decades—the crises they were implemented to address.

Some will try, for their own political reasons, to use this crisis and others—real or imagined—to call for a fundamental restructuring of the American economy or the world economic system.

We need to put any such talk to rest.

The 2020 Index of Economic Freedom, released Tuesday by The Heritage Foundation, shows a world more committed to the principles of free-market capitalism than ever before.

Some 124 of the 180 countries ranked in the index managed improvements in their economic freedom scores this year. The average score in the index is at its highest level in history, and the commitment to free-market reform is stronger than ever. 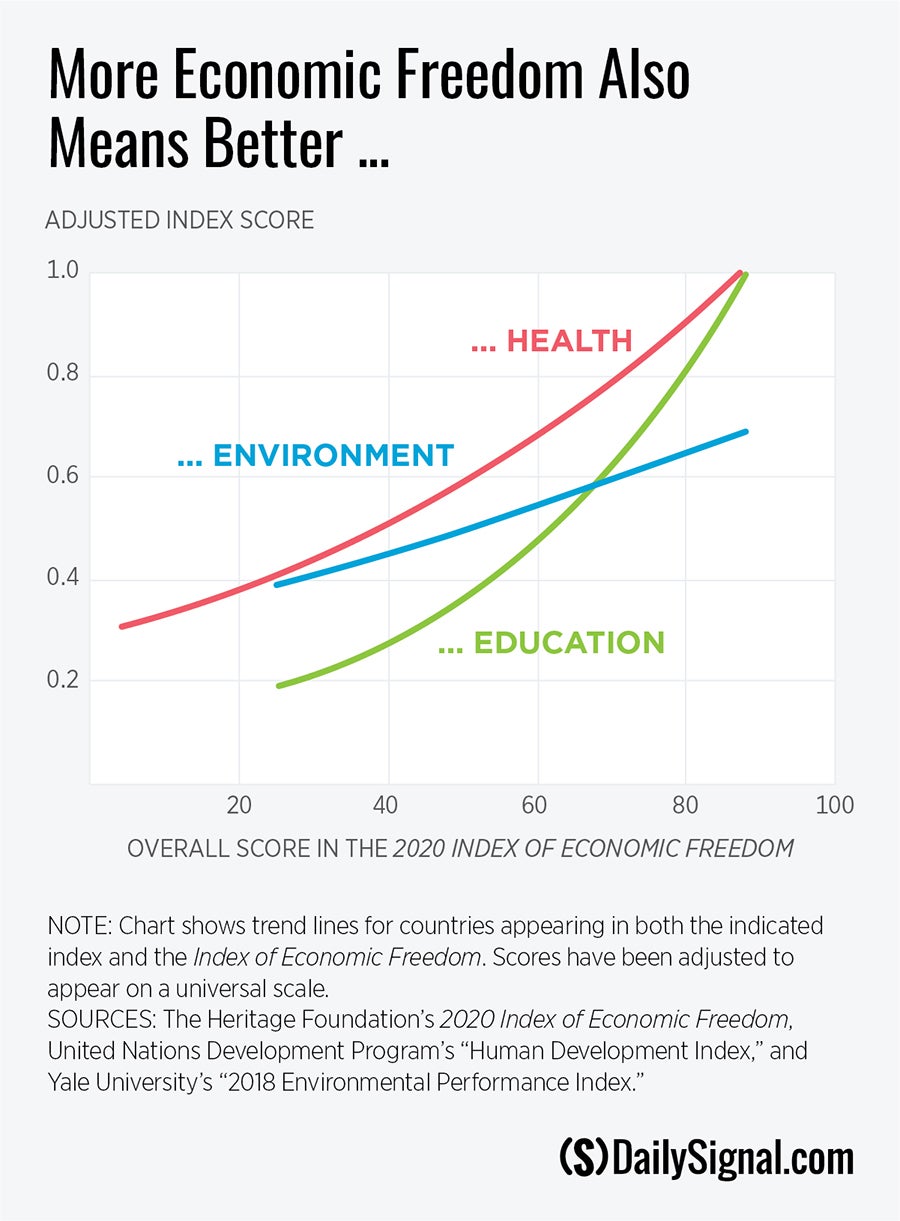 The reasons so many countries have adopted U.S.-style capitalism (though some call it by other names) are clear.

Since the fall of the Soviet Union and its socialist/communist allied governments in Eastern Europe, the world economy has more than doubled in size. Poverty rates have declined by two-thirds.

The globalization of world commerce has brought unprecedented prosperity to the developed economies of North America, Europe, and Asia, and fantastic opportunities for growth to the underdeveloped countries of the world, including China and India.

Hundreds of millions of people are enjoying better lives because their governments have embraced, at least in part, the U.S. way.

The data presented in the index demonstrate conclusively that citizens of freer societies enjoy much higher levels of per-capita income than those who live where governments control most economic activity.

They enjoy longer lives and better standards of health care and education, and live in much cleaner environments.

Countries where economic freedom is growing also have higher economic growth rates, about 1 percentage point per year higher on average. That can add 10% to a country’s living standards over a decade.

The Index of Economic Freedom has a new country at the top of the list this year, Singapore. That Southeast Asian trade and finance powerhouse is the only country to be ranked economically free in every category measured by the index.

The U.S. comes in only at 17th place. That’s five spots lower than last year. Protectionist measures have eroded trade freedom in the U.S., and our applied tariff rates have increased by more than 50%.  That’s sure to hold back economic growth in the future, not only here, but also in countries with which we trade.

We’re obviously going through a tough patch, and Americans’ concerns about their own health and that of our society are running high.

We count on our governments—local, state, and federal—to help us when times are tough. But we need to remember that we live in the most prosperous country in the history of the world, and the fundamental principles of economic freedom have played a vital role in making that happen.

Let’s not trifle with them now.

Economic Freedom Is the Key Ingredient in Enhancing Food Security

The U.S. Must Block Expansion of the IMF’s Special Drawing Rights

Taiwan and the U.S. Are Building on Strong Relationship