The Congressional Budget Office’s Budget and Economic Outlook provides the CBO’s projections of spending, revenue, deficit, and debt levels for the coming decade as prescribed by law. It is the starting point used both for The Heritage Foundation’s Blueprint for Balance and for congressional budget resolutions.

The CBO’s most recent publication paints a dire picture of a looming debt crisis driven by unsustainable spending. The country’s gross debt exceeds $22 trillion, and the CBO projects that:

Such rapid debt growth is particularly alarming when one considers that the U.S. is experiencing a period of healthy economic growth and is not engaged in any large-scale military conflicts.4

The CBO has warned for years that high levels of deficit and debt will eventually lead to an economic breakdown. The impact will be felt by all Americans. Economic research shows that countries carrying such high levels of debt, especially if the debt is on an upward trajectory, experience slower economic growth.5 When debt rises above 90 percent of GDP, economic growth slows by as much as 1.3 percent annually compared to countries with lower debt.6 Slower growth means less take-home pay for workers and fewer opportunities for Americans to improve their economic well-being and attain financial security.7

High and rising debt also entails a real risk of higher interest rates and inflation. Americans would feel this impact directly through higher prices on everyday goods and services. Higher interest rates would also make obtaining a loan to start a business, purchase a car, or buy a house more expensive, putting dreams of homeownership and becoming their own boss out of reach for many Americans.8

In other words, high levels of debt could stifle economic opportunity and prosperity, making it harder for many Americans to live their version of the American dream.

Moreover, borrowing so much money does not come cheaply. CBO data indicate that interest payments on the debt will climb by a staggering 186 percent in the next decade. By 2025, the government could be spending more on interest payments than it does on national defense.9

There is also the real possibility that at some point, creditors may stop buying U.S. debt altogether or may demand excessively high interest rates to continue lending money to the U.S. Concern over the U.S. government’s irresponsible spending practices could lead foreign governments such as China and Japan, two of America’s biggest lenders today, to invest their money elsewhere. Unless other lenders increase their purchases of U.S. debt, options for borrowing money as freely and cheaply could become severely limited and entail a much higher interest cost. This would result in higher interest payments and lower long-term economic growth.10 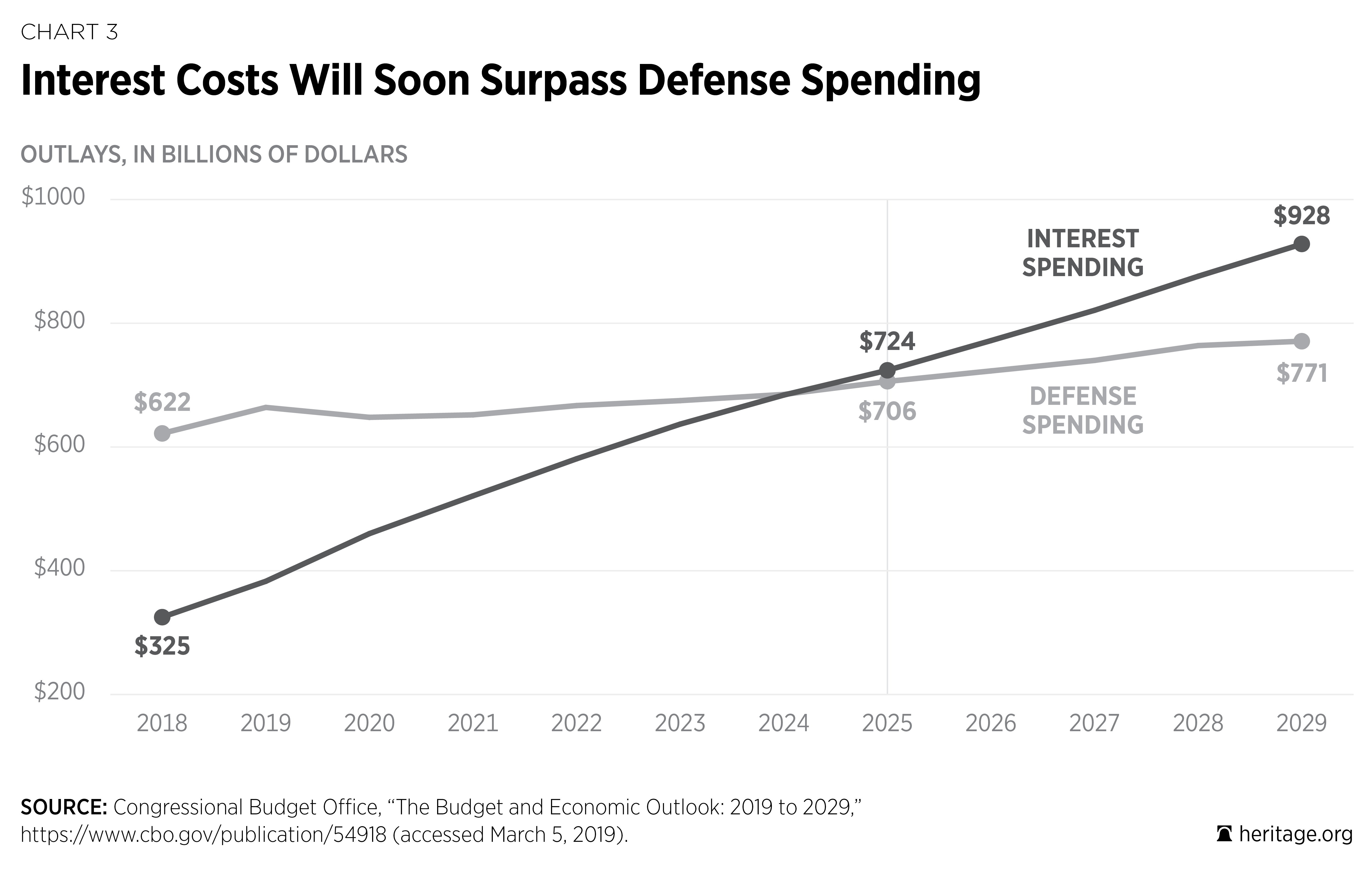 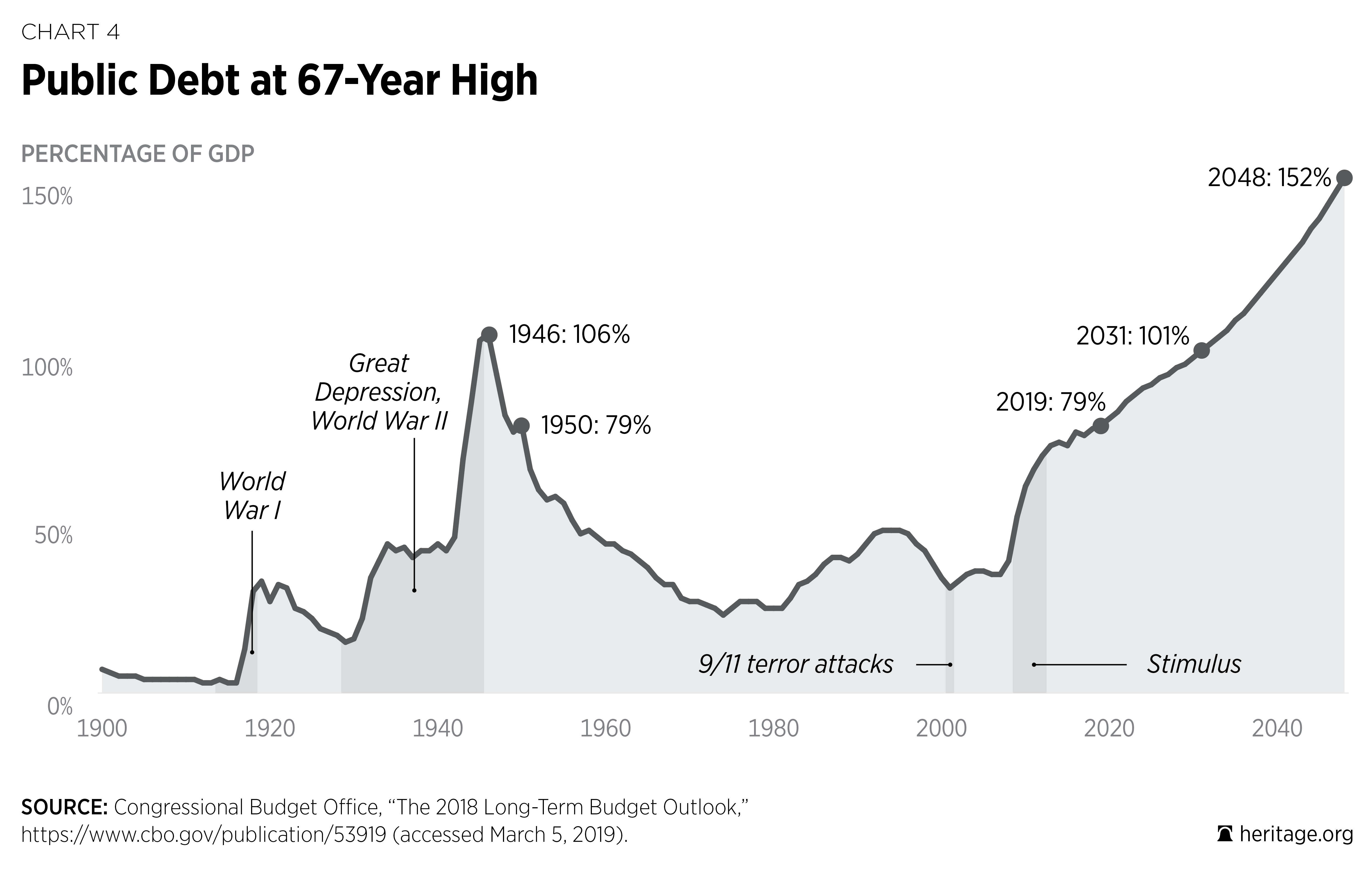 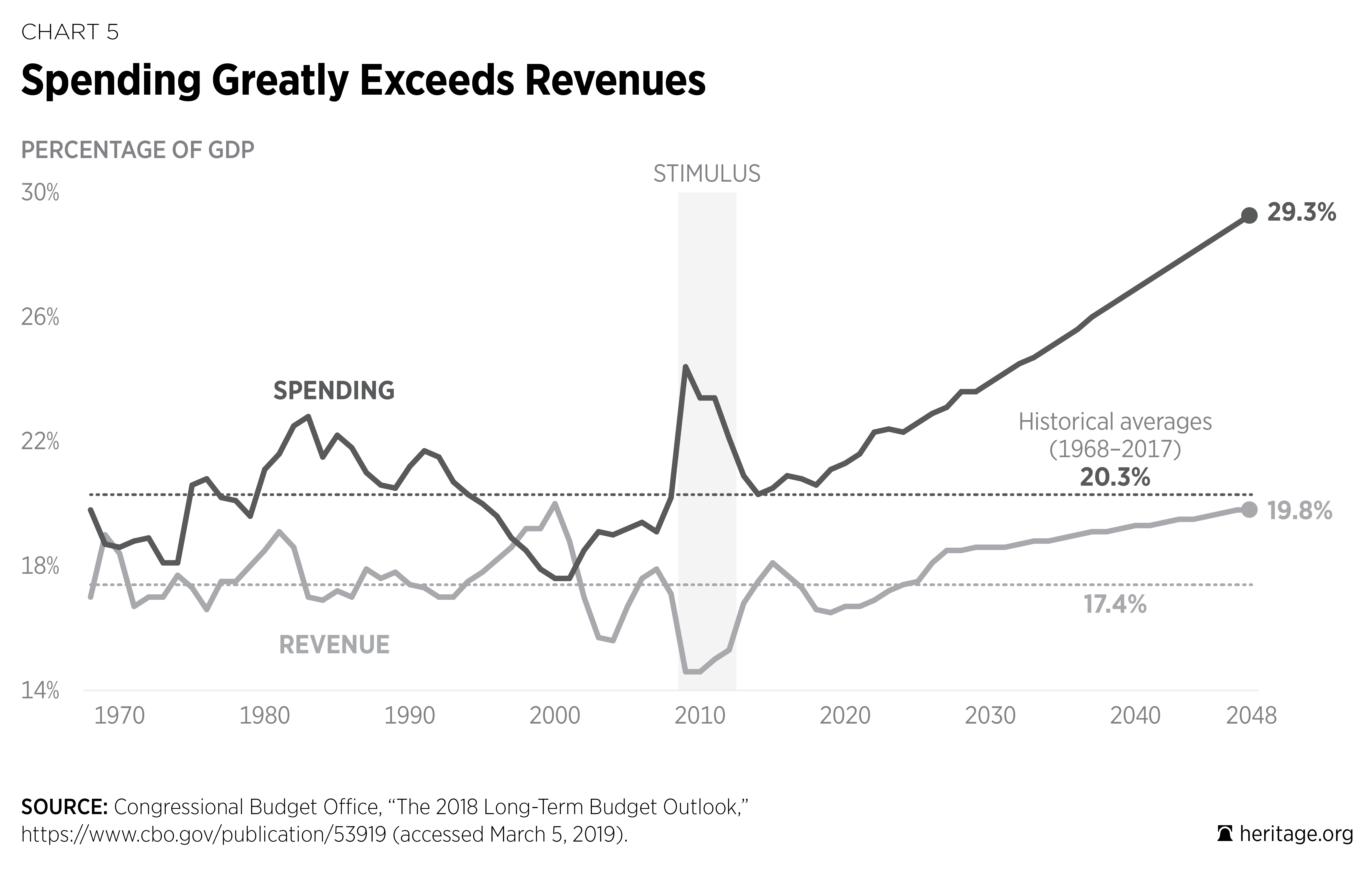 What is driving the nation’s suffocating debt level ever higher?

Some are quick to blame the Tax Cuts and Jobs Act of 2017 (TCJA), the first comprehensive tax reform package since the 1980s, but the evidence does not support that conclusion. The national debt increased by nearly $9 trillion during the eight years that President Barack Obama was in office.11 Through the first two years of the Trump Administration, the debt increased by $2 trillion, a comparable rate.12 The long-run debt problem is not driven by a lack of revenue. CBO data indicate that over the next 10 years, revenues will be above the 50-year average.13

Only one of the past 10 years was affected by tax reform, while debt has been on a steep trajectory since the Great Recession and the economy soared, in part due to the TCJA. According to U.S. Department of Commerce data, economic growth averaged 3.8 percent over the second and third quarters of 201814 and is on pace for the fastest annual growth in 13 years.15 The TCJA has also helped to drive the unemployment rate to its lowest level in 50 years.16

The TCJA’s biggest flaw was that the tax cuts were not accompanied by spending cuts. The economic potential of the tax cuts will never be fully realized if spending continues to grow unchecked.17

The long-term debt crisis facing America is a problem of spending. The reason that the country continues to rack up another trillion dollars in debt each year is that better-than-average revenues cannot keep up with out-of-control spending. The CBO projects that by fiscal year (FY) 2029, nominal federal spending will rise by almost $3 trillion compared to 2018, outpacing above-average revenues by 4.4 percent of GDP.18 That gap is projected to widen to 9.5 percent of GDP within 30 years.19

The long-term spending increase can be attributed to two things: soaring entitlement spending and interest payments on the growing national debt. Social Security, Medicaid, Medicare, and interest payments on the debt together consumed 72 percent of all federal revenues in FY 2018. CBO data indicate that this percentage will rise to 88 percent by 2029.20 In just over 20 years, spending on Social Security, health care, and debt service is projected to overtake all federal revenues.21 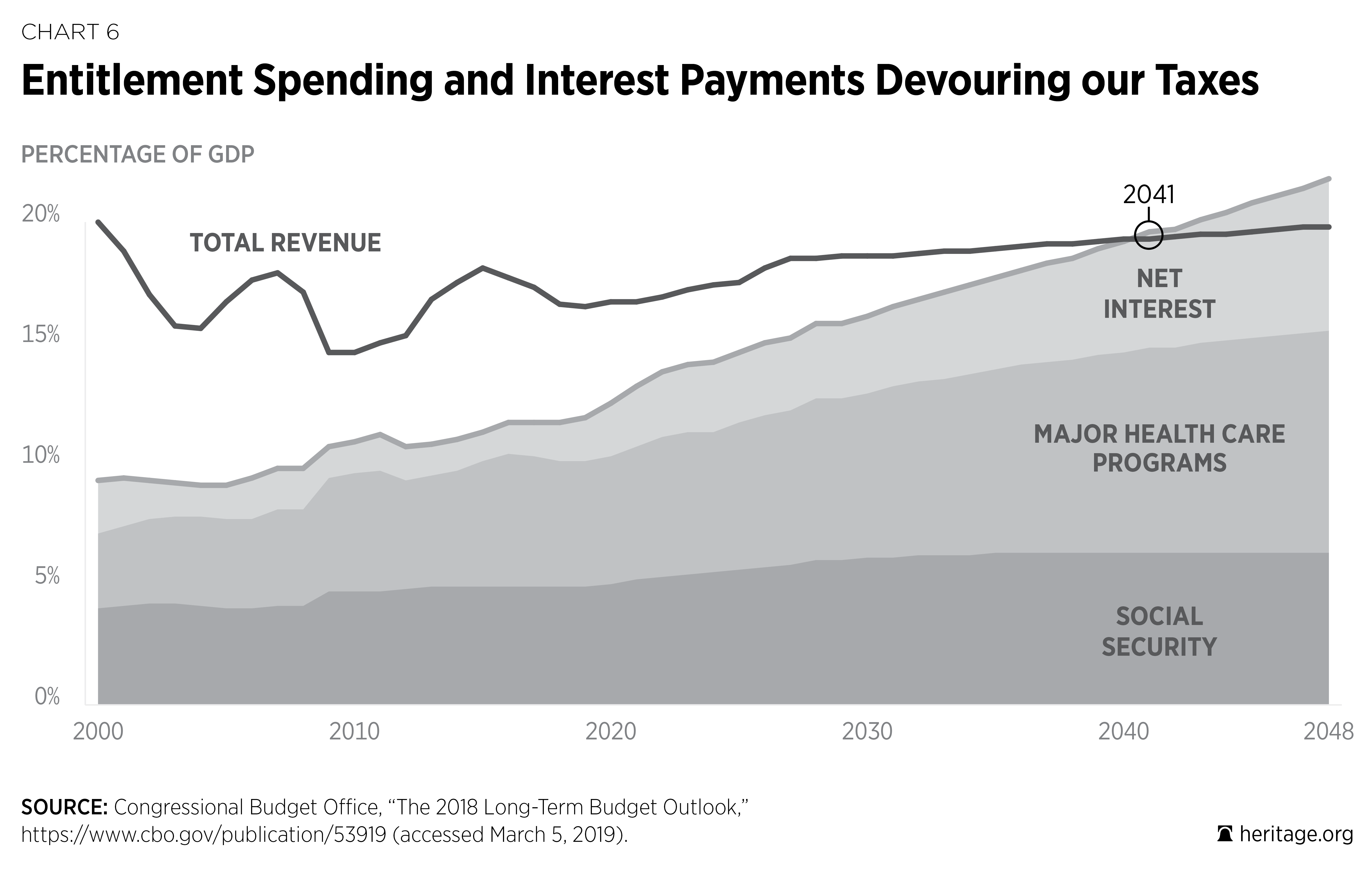 The largest portion of the federal government’s unsustainability is driven by spending on Social Security and health care programs, and this spending is projected to be nearly 55 percent of gross federal spending over the next 10 years. These programs are projected to grow by an average of 6 percent each year, while the CBO projects that economic growth will average less than 2 percent each year through 2029.22 When entitlement programs are designed to grow faster than the economy, it is impossible to keep up with any revenue generation system that the government could design.23

While these autopilot programs and debt are certainly a big part of the problem, Congress’s addiction to spending has contributed to the short-term surge in deficits and debt as well. The primary portion of the budget over which Congress has year-to-year direct control is discretionary spending, about one-third of the total federal budget. In 2011, Congress enacted the Budget Control Act of 2011 (BCA), which placed caps on discretionary spending from 2012–2021.24

The goal of the BCA was to slow the growth of discretionary spending, and it did work initially. However, Congress’s desire for more spending quickly reasserted itself. Specifically, Congress has acted to amend the caps in six of the eight years since passage of the BCA, increasing spending by $440 billion. The most recent budget deal, the Bipartisan Budget Act of 2018, increased spending by $296 billion over two years, with actual funding accounting for only a fraction of the increase. The real debt impact is even worse: The Committee for a Responsible Federal Budget has estimated that the 2018 deal could increase the debt by as much as $2.1 trillion over 10 years.25

Nor is abandonment of the BCA caps the only reason for the increase in discretionary spending. Since passage of the BCA, uncapped disaster and emergency spending has been on the rise. In 2018, Congress spent an additional $125 billion on emergency designated disaster relief. In total, lawmakers have made over $270 billion worth of nondefense budget cap adjustments since 2013.26 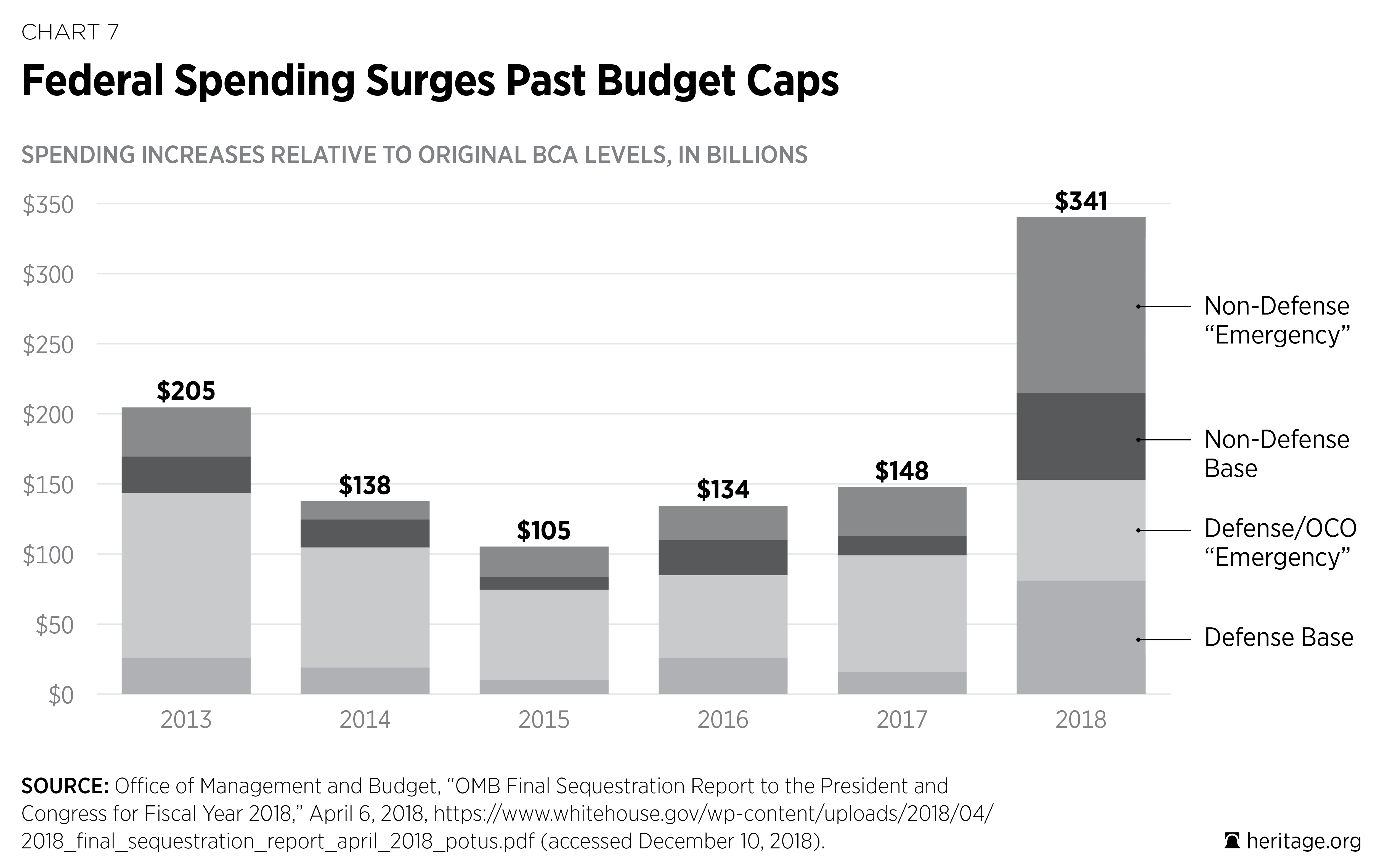 Obviously, natural disaster and emergencies do happen, but much of the money spent by Congress did not go to direct response and recovery efforts. Rather, it went to fund unrelated government grant programs, to provide business subsidies, and to bail out the troubled National Flood Insurance Program. None of these are legitimate emergency purposes. Even when the money is going toward legitimate needs, Congress should still find ways to pay for it and not drive the country further into debt.27

The CBO Budget and Economic Outlook highlights why reforming the federal budget and putting spending on a sustainable path is so important. The good news is that the CBO’s projections do not have to become a reality. There is still time for Congress to act and choose a different direction.

The Heritage Foundation’s Blueprint for Balance: A Federal Budget for Fiscal Year 2020 gives lawmakers the tools they need to do just that. The Blueprint reforms the major entitlements (Social Security and health care programs); refocuses the federal government on constitutional core functions; right-sizes federal spending by eliminating duplicative, wasteful, and inappropriate federal activities that should be handled by the private sector or by state and local governments; and advances pro-growth tax reform—all while respecting religious liberty and enabling civil society to flourish.

These policies will grow the economy and create more opportunity for American job creators and workers, stabilize the national debt, and put the budget on a path to balance. Congress can take our recommendations directly from this Blueprint to develop a budget resolution and reconciliation instructions this year and begin to tackle unsustainable spending and the growing national debt in earnest.