As federal transportation spending consistently outpaces the fuel tax revenues that fund it, the federal government is yet again at an impasse. The Highway Trust Fund, which disburses federal funds to build and maintain road and transit projects, faces a shortfall that will exhaust the fund shortly after the 2014 extension of the Moving Ahead for Progress in the 21st Century (MAP-21) Act expires on May 31. If necessary, the Department of Transportation can take measures to continue disbursing funds until approximately the end of July.[1]

In recent years Congress has routinely addressed the Highway Trust Fund shortfall by transferring money ($62 billion since 2008) from the general fund. However, these bailouts are not a viable long-term solution and indicate that federal highway funding requires extensive structural reform.[2] This paper gives an overview of the Highway Trust Fund, its role in transportation funding, and the current state of its finances.

The Highway Trust Fund collects and distributes money dedicated to federal highway and transit projects. The federal government provides roughly one-quarter of public spending on highways and mass transit, mostly in the form of grants to states. States and localities fund the remainder.[3] The trust fund is funded primarily by the federal taxes on gasoline and diesel fuel, which are 18.3 cents and 24.3 cents per gallon, respectively.[4] The gas and diesel tax rates have not changed since 1993, and account for 90 percent of the fund’s revenues.[5] The remainder comes from taxes on tires, trucks and trailers, and certain kinds of vehicles as well as interest credited to the trust fund.

The Highway Trust Fund is divided into two accounts. The Highway Account is slated to disburse about 85 percent of combined spending on roadway infrastructure and other projects in 2015. The Mass Transit Account expends about 15 percent of spending and funds transit projects, such as rail, buses, and streetcars.[6] However, at least 25 percent of fuel tax funding is diverted to non-highway projects, which is discussed later in this paper.[7]

Budget Shortfalls. In fiscal year (FY) 2015, Highway Trust Fund spending is projected to reach $52 billion. The Highway Account is expected to spend $44 billion, but take in only $34 billion in revenue and interest, while the Mass Transit Account is expected to spend $8 billion compared with $5 billion in revenue, resulting in a combined deficit of $13 billion.

The annual deficits are expected to grow. By 2025, the Congressional Budget Office (CBO) predicts that the Highway Trust Fund will take in only $38 billion, but spend $60 billion[8] for a $22 billion deficit if current trends continue. If the Highway Trust Fund continues spending as projected by the CBO, it would generate a $180 billion deficit over the next decade, pushing the potential cumulative shortfall to $168 billion. 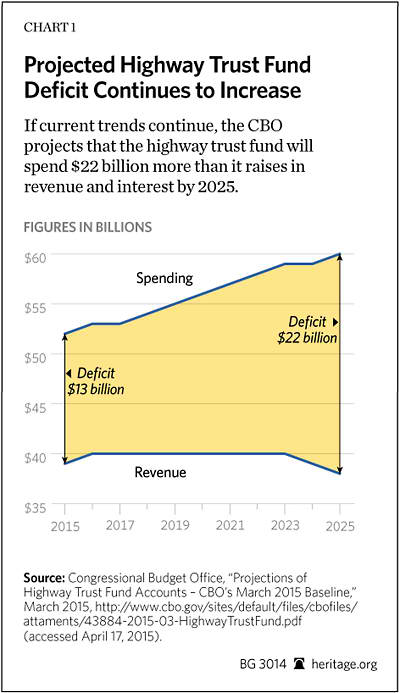 Because the Highway Trust Fund by law is not allowed to run a negative balance and requires approximately a $5 billion minimum balance to meet obligations as they come due, Congress would need to transfer money from the general fund, cut spending, increase revenue, or some combination of these to keep the fund solvent.[9] If Congress fails to address the impending insolvency, the Department of Transportation estimates that it will have enough funds to continue normal operations through the end of July.[10] Then, the Department of Transportation would need to employ various cash-management measures, such as across-the-board cuts and payment delays, to keep disbursements flowing to the states. Such measures would increase uncertainty in already authorized projects.[11]

Long-Term Funding Issues. Highway Trust Fund spending has outpaced revenue by billions and will continue to do so if current policies are kept in place. Spending has expanded beyond the original purpose of building and maintaining the interstate highway system to funding a litany of non-highway projects that are not national priorities. Growth in spending has far outpaced fuel tax revenues, which have flattened (declined in real terms) primarily because technological advances, such as more fuel-efficient combustion engines and hybrid and electric vehicles, have decreased aggregate fuel consumption. Furthermore, Highway Trust Fund spending falls outside normal budgeting constraints that govern most federal expenditures. This has created the current unsustainable situation in which the Highway Trust Fund has required repeated bailouts from the general fund.

Diversions from Highway Spending. Congress and the states divert roughly 25 percent of the Highway Trust Fund spending to non-highway projects that are not federal priorities.[12] The largest of these diversions is the Mass Transit Account, which spent some $8 billion in 2014 on buses, rail, streetcars, and other projects that should fall under the responsibility of municipal or state governments. Other programs include the Transportation Alternatives Program, which spent $820 million in 2014 on undertakings such as sidewalks, bike paths, scenic overlooks, vegetation management, and recreational trails.[13] These diversions sap funds that could be spent on the highway system—the purpose of the highway trust fund—and shortchange the motorists and shippers that pay directly into the system through fuel taxes.

Unique Budgetary Treatment. The Highway Trust Fund is unique in that its contract authority—the authority to obligate funds in advance of an appropriation act, similar to budget authority—is classified as mandatory, while its outlays are classified as discretionary spending. This hybrid status creates an unusual scenario in which normal budget constraints for mandatory and discretionary spending do not apply to the Highway Trust Fund. As the Committee for a Responsible Federal Budget explains:

Because of this unique treatment, neither statutory budget caps on discretionary spending nor across-the-board cuts (or pay-as-you-go rules) for mandatory spending apply to Highway Trust Fund expenditures.[15]

Furthermore, the way that the CBO scores future highway spending allows intragovernmental transfers (“bailouts” from the general fund) to be double counted and used to offset other spending or tax increases in addition to shoring up the fund. This is because the CBO baseline projects that Highway Trust Fund expenditures will continue at current levels, even when the Trust Fund lacks sufficient funds for new spending. Thus, because the CBO has already accounted for this future spending that would not occur under real-world conditions, any transfers are not scored as a net cost to the government even though they allow for higher spending than would be possible without the transfer.

Condition of the Nation’s Roads and Bridges

While the common perception is that America’s infrastructure is “crumbling” and thus requires more federal expenditures, the reality is not nearly as bleak. Some infrastructure certainly requires maintenance and updating, as congestion is a major concern in many metropolitan areas. Indeed, the federal government provides perverse incentives for states to spend billions on new, unneeded projects instead of maintaining existing systems.[18]

Yet taken as a whole, the nation’s infrastructure performs well and is improving. The percentage of bridges that are structurally deficient—meaning that they require extensive maintenance, but are not necessarily unsafe[19]—has declined from 22 percent in 1992 to 10 percent in 2014.[20] Highways and roads have also improved: The Federal Highway Administration notes that the percentage of vehicle miles traveled on the National Highway System with “good” ride quality rose from 48 percent in 2000 to 60 percent in 2010, while the share with “acceptable” ride quality increased from 91 percent to 93 percent.[21]

Indeed, a Reason Foundation study of infrastructure performance from 1989 to 2008 concluded that, while individual elements of the system “are continuously deteriorating over time, the overall condition of the state-owned highway system appears to be improving, and has possibly never been in better shape. In short, the U.S. highway infrastructure is not ‘crumbling.’”[22]

In the midst of uncertainty in Washington, states have ramped up their own strategies to invest in their infrastructure. Over the past year, 23 states have acted to generate revenue devoted to infrastructure spending, and 110 transportation funding bills are awaiting action in 26 state legislatures in 2015.[23] Most notably, states are using a variety of methods to raise revenue for transportation spending aside from increasing state gas taxes. These methods include:

Collectively, these measures show that states have the capacity and willingness to determine their infrastructure spending at the state level without relying on Highway Trust Fund mandates or large gas tax hikes. Repealing the ban on tolling on segments of the interstate highway system, which are owned by the states in which they are located, would further states’ ability to self-fund their transportation systems.

Congress is considering a variety of options to address the Highway Trust Fund shortfall. These approaches range from short-term transfers or tax hikes that do not change the system’s inherent problems to structural reforms that would ensure solvency by reducing the federal government’s involvement in transportation spending:

The current method of investing in infrastructure through the Highway Trust Fund is not working. Congress not only has chosen to spend more than the fund receives in revenue, but is increasingly spending it on projects that are far outside of the federal purview. Local streetcar and bike path projects, while not inherently imprudent, should not be constructed using federal tax dollars collected from motorists.

Instead, Congress should strengthen the nation’s highways in a fiscally responsible way by limiting spending and ending diversions to projects that are not federal priorities. Even better, Congress should minimize the federal government’s role in transportation spending, leaving states to decide how best to invest in the infrastructure that their citizens deem most necessary.

[5] Lowry, “The Federal Excise Tax on Motor Fuels and the Highway Trust Fund.”

[8] These projections from the CBO’s baseline assume outlays would keep pace with inflation and that taxes set to expire at the end of FY 2016 would continue beyond their expiration date.

[16] Some expenditures are subjected to sequestration cuts, such as contract authority assigned to programs that are exempt from obligation limitations set by appropriators, but such sums are relatively small. In 2014, mandatory sequestration trimmed $54 million from highway spending in these accounts.

[17] Lowry, “The Federal Excise Tax on Motor Fuels and the Highway Trust Fund.”

[19] Randal O’Toole, “Infrastructure Is Not the Problem,” Cato Institute, May 28, 2013, http://www.downsizinggovernment.org/infrastructure-not-problem (accessed April 27, 2015).

Planes Fly on Modern IT, Not Green Dreams

The Biden Administration’s Electric Vehicle Gambit Is Illegal and Costly