The Congressional Budget Office's (CBO) recent cost estimate for the Senate health care bill, sponsored by Senator Majority Leader Harry Reid (D-NV), creates the impression that Senate Democrats have succeeded in crafting a deficit-neutral, fiscally responsible legislative package. But it is an illusion.

Like its House-passed counterpart, the Reid bill would dramatically increase federal budget deficits in coming years, not reduce them, because key assumptions in CBO's cost estimate--especially the viability of the so-called "firewall," which aims to prevent most workers from accessing new subsidies for insurance--will never hold up over time.

The Reid bill assumes that Medicare physician fees will get cut on the order of 20 percent beginning in 2011 and then remain at the reduced level indefinitely. There is strong bipartisan opposition to such cuts, but getting rid of them will increase Medicare costs by over $200 billion over a decade. Honest accounting of the so-called "doc fix" (the legislation needed to prevent the fee cuts from occurring) would push the Reid bill from the black into a deep red.

In addition to unrealistic assumptions about physician fees, the Reid bill, like its House counterpart, would impose deep and permanent cuts in provider payment rates for hospitals, nursing homes, home health agencies, and others in Medicare, as well as cuts for those providing drugs and services in Medicaid. During the first 10-year window, CBO expects these cuts to result in spending reductions of $491 billion, including $118 billion from Medicare Advantage plans.[1]

That is a direct hit on benefits for seniors, many of whom signed up with Medicare Advantage because they cannot afford Medi-gap premiums. The last time Congress went down this road of arbitrary, across-the-board cuts, it was only a matter of months before they were scrambling to restore many of them.[2]

How the "Firewall" Works

The centerpiece of the Reid bill is a promise to all households with incomes between 100 and 400 percent of the federal poverty level that the premiums they owe for health insurance will be limited to a fixed percentage of their incomes. At the low end of this income range, in 2016, families would pay no more than 2.1 percent of their income toward health insurance. The premium cap would increase on a sliding scale until it reaches 10.2 percent for families with incomes between 300 and 400 percent of the poverty line.[3]

If that sounds too good to be true, it is because it would be for the vast majority of workers. All but the smallest employers would be required to offer qualifying coverage to their full-time workers to avoid hefty taxes. And if the employee share of the premium is below a specified threshold, a worker would have no choice but to take what is offered on the job to avoid paying a penalty tax himself.

In qualified employer plans, the employer share of the premium would have to cover much of the premium cost to keep the employee share below the cap. But when an employer pays for health insurance, it is really the worker who pays anyway in the form of lower cash wages. That is the consensus of credible economists, including those working at CBO.[4] Employer-paid premiums do come with a federal tax preference, but it is worth much less for most low- and moderate-wage workers than the subsidies Senator Reid is offering to those getting insurance in the exchanges.

The Disparate Subsidies the Firewall Creates

CBO estimates the average cost of family coverage at $14,100 in 2016.[5] Under the Reid plan, a household with an income at 200 percent of the federal poverty line (or about $48,000 for a family of four in 2016) would be eligible for subsidized health insurance if it joined the insurance exchange. The amount this family would be responsible to pay toward its insurance premium would be capped at 6.5 percent of their household income.[6] They would thus pay only $3,120 toward their own insurance policy, and their employer would pay a fee of $750 to cover some of the cost. The rest of the premium--$10,230 in this example--would be covered by the federal government.

By contrast, a worker with the same total compensation from his employer (about $48,000 in 2016) but with job-based insurance would get much less help from the federal government. The total premium would still be $14,100 for a family policy. If the employer paid all of it, the tax advantage for the worker would be worth about $4,300. That's nearly $6,000 less in governmental support than the worker who is eligible for direct subsidization in the exchange. 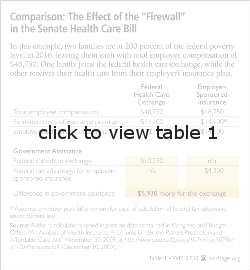 CBO's assessment of the Reid bill is built on the dubious assumption that Congress can hand out a lucrative new entitlement to a limited number of low- and moderate-income voters while denying it to tens of millions of others with equal qualifications.

According to the Census Bureau, in 2008, there were 127 million Americans under the age of 65 living in households with incomes between 100 and 400 percent of the federal poverty line.[7] But CBO assumes that in 2015, only 18 million people would get subsidized premiums in the Reid plan.[8] The vast majority of American workers would get no additional federal assistance due to the "firewall," even as the government pushed the cost of compulsory health insurance much higher with regulations, taxes, and fees. This is how Senator Reid shoehorns a $1.5-2.0 trillion "universal coverage" scheme into an $848 billion sack.

But will it last? Congressional Democrats are already racing ahead with amendments to demonstrate their commitment to insurance "affordability" for the middle class. It would be only a matter of time before Congress responded to the inevitable political pressure and expanded the entitlement, perhaps in steps, to larger and larger numbers of Americans.

The history of federal entitlement programs is one of growth and expansion. The new entitlement in the Reid plan will be no exception. Indeed, it is likely to become the fastest-growing one ever enacted, with costs far in excess of what CBO has assigned to the bill as currently written.

James C. Capretta served in the Office of Management and Budget (OMB) during the Bush Administration and is a Fellow in the Economics and Ethics Program of the Ethics and Public Policy Center.

[2]For an explanation of the legislative history of recent Medicare payment reductions and increases, see Republican Staff of the House Budget Committee, "Medicare Savings for Health Care: Can Congress Stay the Course?," September 18, 2010, at http://www.house.gov/budget_republicans/press/2007/pr20090917medicare.pdf (December 10, 2009).

Obamacare Has Doubled the Cost of Individual Health Insurance