Medicare is accumulating an unfunded obligation of between $28 trillion and $37 trillion.[1] This is the dollar amount of promises to Medicare beneficiaries that are not financed with dedicated revenues. Although comprehensive Medicare reform is in order, one small step to alleviate this burden would be a further reduction in taxpayer subsidies to Medicare’s wealthy recipients.

Historically, taxpayers, through payroll taxes and general revenues, have funded about 88 percent of Medicare’s total costs in any given year. The 2.9 percent payroll tax on workers’ wages is mandatory, and its revenues are earmarked for Medicare Part A, the Hospital Insurance (HI) program. Taxpayers, through general revenue transfers, finance 75 percent of the funding for Medicare physician services (Part B) and drug coverage (Part D). Beneficiary premiums finance the remaining 25 percent of these medical costs. In sharp contrast to Medicare Part A, Medicare Parts B and D are voluntary programs. No person is forced to enroll and pay the taxpayer-subsidized premiums.

Representative Fred Upton (R–MI), chairman of the House Energy and Commerce Committee, recently unveiled a proposal that would require individuals with an annual income of $1 million and couples with an annual income of $1.5 million to pay 100 percent of their Medicare Parts B and D premiums.[2] Representative Upton’s proposal expands on current policy.[3] Both the Medicare Modernization Act of 2003 (MMA) and the Medicare Access and CHIP Reauthorization Act of 2015 (MACRA) require upper-income Medicare enrollees to pay higher premiums. This policy affects approximately 6 percent of the total Medicare population.

Income testing of Medicare premium payments has not, as some critics fear, resulted in an exodus of wealthy recipients from the program.[4] Even with less generous subsidies, Medicare’s large pooling of risks and guaranteed issue coverage is a major financial advantage to wealthy beneficiaries. It is worth noting that the President has proposed that 25 percent of all seniors eventually pay higher Medicare premiums.[5]

When Medicare was created in 1965, senior citizens were among the poorest of the general population and roughly half did not have access to private health insurance coverage. The program thus fulfilled a specific need, assisting those who did not have coverage with guaranteed and continuous coverage and improving the financial security of America’s elderly population. The program has clearly accomplished those objectives. All seniors today have insurance coverage, and, while the population has been aging rapidly, the poverty rate among senior citizens has shrunken dramatically, from 35 percent in 1960 to just 10 percent today.[6]

Meanwhile, Medicare has evolved into a vast generational income-transfer program from working families to an ever-larger senior population, including upper-income recipients who are financially better off than the working families that support them. The Medicare payroll tax, in particular, has odd social consequences. As economist Robert Samuelson has observed, “Today, younger and poorer workers increasingly support (through payroll taxes) older and wealthier retirees.”[7] Indeed, in the case of both Social Security and Medicare, the income transfers from workers to retirees are staggering. The popular notion that today’s beneficiaries have “paid for” the benefits that they enjoy in retirement is a myth. Urban Institute analysts have noted that a married couple retiring in 2015 who earned an average annual income ($47,800) will have paid an estimated $683,000 in lifetime Medicare and Social Security taxes and will have secured $1,038,000 in lifetime benefits in retirement.[8] Taxpayers, through the giant federal entitlement programs, are creating millionaires in retirement.

Mark Pauly, professor of economics at the University of Pennsylvania, reports that higher income enrollees are also generally able to secure more care than lower income enrollees: “Research is less definitive here, but there is much evidence that higher income people obtain more services even under systems that are rationed on the supply side. It is not so much income per se, but the higher education that usually accompanies it, which allows the better-off to talk their way around treatment protocols and financial incentives to doctors. From the British National Health Service to Hometown HMO, use is not equal; the more affluent get more.”[9]

Congress should continue to adopt measures that reduce taxpayer subsidies to wealthy beneficiaries. A reasonable target would be to increase the number of Medicare beneficiaries who pay higher Medicare premiums from 6 percent to 10 percent of the total Medicare population. One sound proposal to accomplish that goal would reset the income threshold for higher Medicare premium payment at $55,000 for individuals and $110,000 for couples.[10] Below those income levels, the beneficiaries would be entitled, as they are today, to 100 percent of the standard taxpayer subsidies. Above those levels, premiums would gradually increase. Parts B and D premiums would increase 1.8 percent for every $1,000 increase in income above the initial income thresholds for individuals and couples. Taxpayer subsidies would end for individuals with an annual income of $110,000 and for couples with an annual income of $165,000. Instead of the sharp, cliff-like increases that characterize both current law and the Obama proposal, Medicare premiums would rise gradually with incremental increases in annual income. 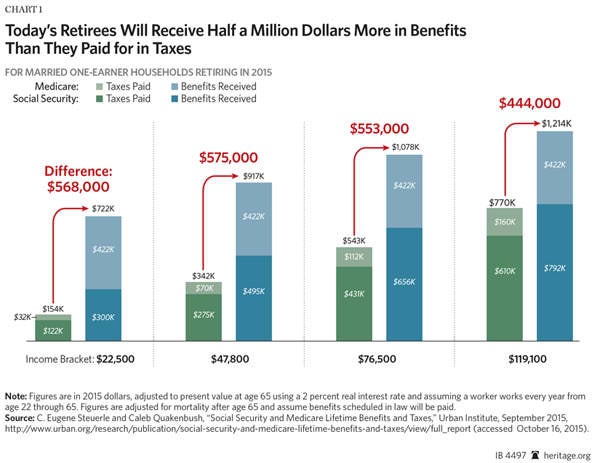 Moving Toward a New Social Contract

Ultimately, the best Medicare reform policy is a defined contribution (premium support), which would foster unprecedented choice and cost-cutting competition within the program. In the meantime, given the vast social, economic, and demographic changes of the past 50 years, Congress should focus on targeted assistance to those who need the most help while further reducing taxpayer subsidies to those who do not. As Samuelson observes, “The central question is an enduring one: How do we help those who can’t help themselves without also tempting those who could help themselves from becoming dependent on government?”[11]

Policymakers should not only determine what is “due” to beneficiaries, but also what is fair for taxpayers. Medicare today massively redistributes income from younger working families to older retirees. Congress needs to address the consequences of that redistribution on younger persons who are working, raising families, and saving for their own retirement. It is clearly unjust for one generation to saddle generations yet unborn with mountainous debt that undermines their own economic future. If entitlement spending is not restrained, the consequence will be shrinkage of economic opportunities and a lower standard of living for America’s children and grandchildren.

A new social contract, striking a proper balance between generations, must be based on truth. It is true, of course, that beneficiaries have paid Medicare’s payroll taxes during their working lives to secure medical benefits in retirement. It is also true that those taxes went to pay for the benefits of retirees at that time. These taxes were not saved for today’s beneficiaries. It is not true that beneficiaries “paid” for the level of benefits they enjoy in retirement. In retirement, they are mostly the beneficiaries of large-scale taxpayer spending. Taxpayer subsidies for entitlements are not “tax breaks,” and reductions in taxpayer subsidies for federal entitlements are not “tax increases.”

Progressives constantly advocate higher taxes on the rich. However, high-income earners already pay the lion’s share of the tax burden. The top 10 percent pays 68 percent of the total federal tax burden.[12] Raising their taxes even higher would have negative economic consequences for Americans who are not rich in the form of fewer job opportunities and lower wages. A better approach is to reduce the amount of entitlement subsidies the rich receive, including Medicare. This would shrink the size of government with none of the harmful economic effects of punitive and counter-productive tax policy.

Today’s universal entitlements are unsustainable luxuries. Government should help those who cannot help themselves, but it should also encourage those who can help themselves to do so, and thus reduce the growing and fiscally dangerous dependency on federal entitlements. Combined, comprehensive tax and robust entitlement reform could establish the firm foundations of a new—and superior—social contract for the 21st century.

—Robert E. Moffit, PhD, is Senior Fellow in the Center for Health Policy Studies, of the Institute for Family, Community, and Opportunity, at The Heritage Foundation.

California Nightmare: What to Know About Left’s Next Run at Single-Payer Health Care