The House of Representatives will soon take up legislation (H.R. 3961) to “fix” the Medicare physician payment update formula. The likely result: huge new costs on taxpayers.

In recent years, the Medicare trustees have included a caveat when presenting the forecasts for Medicare Part B expenditures. Specifically, the trustees’ forecasts are based on current law (as is appropriate, since to do otherwise would be an attempt to predict the specific form of new legislation), but since 2003 the physician payment reductions required under the Sustainable Growth Rate (SGR) provisions of current law have been consistently overridden by Congress.

The 2009 trustees’ report, like previous reports, recognizes the persistent congressional reversals of current law payment rate adjustments by noting that their projected Medicare Part B expenditures are significantly understated. In their words:

It is important to note that projected SMI [supplementary medical insurance] expenditures are significantly understated because future reductions in physician payment rates, required under current law, are unrealistic and very likely to be overridden by Congress.[1]

Recently introduced legislation (H.R. 3961) would restructure the SGR formula and increase spending by $210 billion over the next 10 years, according to a recent scoring by the Congressional Budget Office.[3] But, as with any legislation, the 10-year costs only scratch the surface, since long-term impacts are ignored.

Consider the Medicare trustees’ estimates of Medicare’s long-term unfunded obligations and general revenue requirements as reported in the 2009 report: 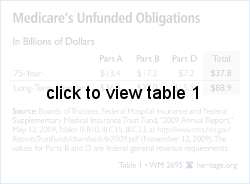 The transitional update for 2010 in H.R. 3961 sets the update as the percentage increase in the MEI. We assume that the actuaries’ estimates using the MEI as a base in their supplemental report provide a reasonable indication of the long-term costs. The effect of this methodology on Medicare Part B spending over the next 75 years can be seen in the following figure. 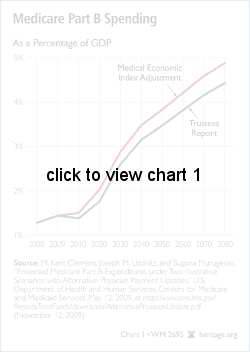 Allowing the physician payment updates to match the percentage change in the MEI increases Medicare’s unfunded obligation by $1.9 trillion using the 75-year horizon and by $4.1 trillion in the long term. 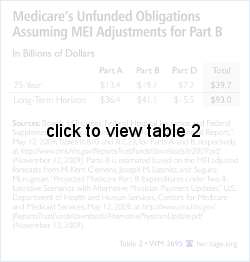 Huge Costs on the Horizon

In sum, if the MEI adjustments to Part B spending persist indefinitely, then Congress will have to raise $4.1 trillion more in general revenue than is reflected in the 2009 trustees’ report. This additional funding requirement by itself accounts for almost 3 percent of federal income taxes at historical levels.

The experience since 2003—with Congress repeatedly overriding the SGR and disregarding the general revenue funding warning—is instructive when considering legislative promises of future cost-cutting in Medicare.

[4]The estimates are made following the MEI update scenario as in Clemens, Lizonitz, and Murugesan, “Projected Medicare Part B Expenditures.”

U.S. Health Care Policy: 2022 Will Be a Really Confusing Year