Doug Badger
Former Senior Research Fellow
Doug Badger was a senior research fellow in the Center for Health and Welfare Policy at The Heritage Foundation.

Health care premiums have fallen in states that gained relief from some of the Affordable Care Act’s mandates through a process called "Section 1332 waivers.” Under the Trump Administration, the Centers for Medicare and Medicaid Services has established a record of approving Section 1332 waivers and lists them among the “waiver concepts” to which it is favorably disposed. These waivers do not entail the creation of a new federal program, nor do they require a new federal financing stream. State leaders should make greater use of waivers to implement additional market-based innovations that would further increase health care choices and reduce costs. Federal legislation to establish such programs is unnecessary and could have the effect of suppressing state innovation.

Average health care premiums declined for the first time in 2019, driven largely by seven states that obtained waivers to opt out of certain Obamacare mandates.

Premiums in those waiver states fell by nearly 7.5 percent, while premiums in the other 44 states under Obamacare rose by more than 3 percent.

The Affordable Care Act (ACA) established a regime of subsidies, mandates, regulations, and tax penalties that resulted in substantial increases in premiums for individual insurance coverage.REF Average premiums for benchmark plans—exchange-based policies whose rates are used to compute federal premium subsidies—were 76 percent higher in 2018 than in 2014.REF That trend did not continue in 2019, when premiums for benchmark plans fell by 0.83 percent, the first such decline recorded.REF

That result defied forecasts of double-digit premium increases, which many analysts predicted would result from repeal of tax penalties on the uninsured and liberalization of federal rules governing short-term, limited duration policies. The Congressional Budget Office, for example, projected that 2019 premiums would rise by an average of 16 percent as a result of those and other changes.REF 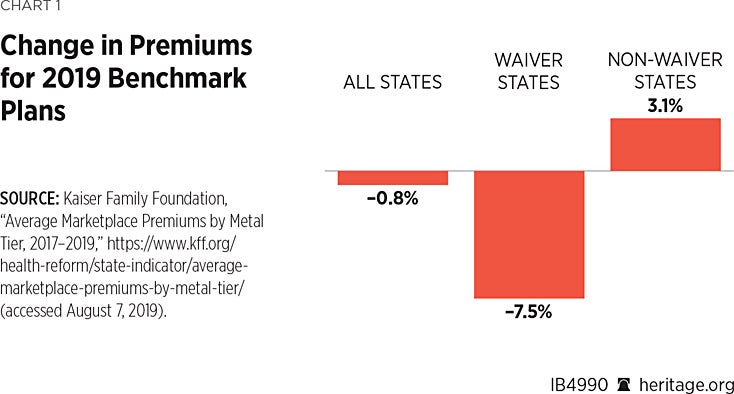 The standard explanation for why these predictions proved erroneous is that insurers “overshot” their rate hikes in 2018 and adjusted them downward in 2019.REF While broadly correct, this masks another critical factor.

This Issue Brief identifies a very different factor that produced the overall decline in premiums for benchmark plans, one that accounts for substantial differences in benchmark premium trends across states. More specifically, the study finds that premiums declined significantly in the seven states that obtained federal waivers to operate risk-stabilization programs (median reduction of 7.48 percent), and increased in the 44 states and the District of Columbia that did not have such waivers in place (median increase of 3.09 percent).REF

This Issue Brief also examines estimated premiums in five statesREF that have applied for risk-mitigation waivers for the 2020 plan year. Premiums for benchmark plans rose in all five states in 2019. Actuarial analyses forecast that 2020 premiums will decline in all five states if the federal government approves their waiver applications. (See Table 2.)

Risk-stabilization waivers afford states the opportunity to reduce premiums without requiring additional federal outlays. Congress should reject proposals to create a federally financed reinsurance program, since states can use the waiver process to achieve premium reductions in a way that does not entail the creation of a new federal funding stream. Congress should build on the initial successes of states by further empowering them to pursue reforms.

Section 1332 of the ACA permits states to seek waivers from certain federal health insurance regulatory requirements.REF Under this provision, a state can request permission from the Centers for Medicare and Medicaid Services to receive a portion of federal premium subsidies that the federal government otherwise would pay directly to insurance companies on behalf of eligible individuals. These are known as pass-through funds, which the state can use to finance innovative proposals to make health insurance more affordable and widely available. In addition to meeting other statutory and administrative requirements, a state must demonstrate that its pass-through funding would be offset by reductions in premium subsidies, so that its waiver would be budget neutral to the federal government.REF

The waivers that have most commonly been granted under section 1332 are for risk-stabilization programs.REF Although these programs vary from state to state, they follow the same general pattern: States repurpose a portion of federal money that would otherwise have been paid to insurers as premium subsidies, supplement these federal pass-through funds with non-federal money, and then use the resulting funds to pay insurance claims for policyholders who incur high medical bills. Since this process would reduce premiums for benchmark plans, it also would reduce federal premium subsidies, making it budget neutral to the federal government.REF

Seven states are operating risk-mitigation programs during the 2019 plan year. As of this writing an additional five states have applied for waivers for the 2020 plan year.

Table 1 shows changes in benchmark premiums for the 2019 plan year.REF The benchmark is used to compute federal premium subsidies for qualifying individuals. Since these subsidies fluctuate dollar for dollar with premium increases, changes in the cost of benchmark plans affect federal expenditures directly.

The first row summarizes premium changes for the 50 states and the District of Columbia. It shows that premiums for benchmark plans were, on average, 0.83 percent lower in 2019 than in 2018.

A closer look at this national average, however, discloses that average premiums climbed in most states. Premiums rose or were unchanged in 32 states and the District of Columbia (median increase of 6.36 percent) and fell in only 19 (median decrease of 7.48 percent).REF

The second row of Table 1 focuses on the performance of the seven states that have section 1332 risk-mitigation waivers in 2019. These seven states had median premium decreases of 7.48 percent, significantly outperforming the national average of –0.83 percent. Premiums declined in six of the seven waiver states, accounting for nearly one-third of the 19 states in which benchmark premiums fell in 2019. The median decrease in these six states was –10.72 percent, a figure that is substantially greater than the median for the other 13 states in which premiums declined by 5.67 percent. Only one waiver state, Oregon, registered an increase in its benchmark premium. 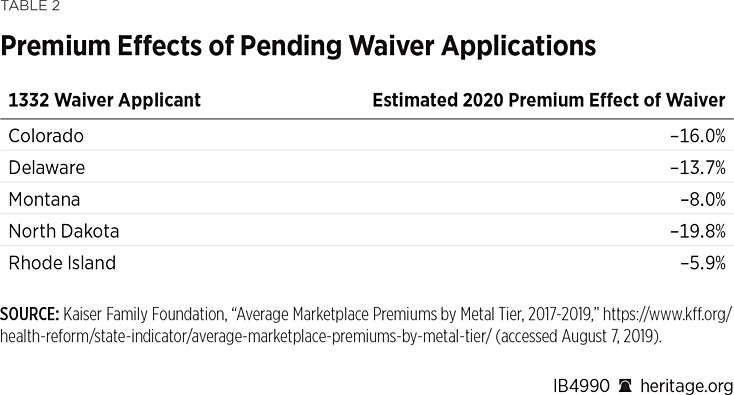 As of this writing, five states have applied for section 1332 risk-mitigation waivers for the 2020 plan year. Such applications must include actuarial and economic analyses estimating the premium and enrollment effects of the waiver. Waiver applications also must include a finding that the waiver would not result in additional federal spending. Table 2 presents the estimated 2020 premium effects contained in each state’s actuarial and economic analysis.

North Dakota, for example, proposes a reinsurance fund that would pay 75 percent of claims between $100,000 and $1,000,000.REF Colorado, by contrast, would set the claims range at $30,000 to $400,000 and would vary coinsurance by rating area (range of 45 percent to 85 percent).REF The ability of a state to tailor its waiver program to its market (and to vary the program to reflect market variations within the state) is an essential feature of the 1332 waiver program.

States have used section 1332 risk-mitigation waivers to achieve premium savings. The Centers for Medicare and Medicaid Services has established a record of approving these waivers and has listed them among the “waiver concepts” to which it is favorably disposed.REF Critically, these waivers do not entail the creation of a new federal program, nor do they require a new federal financing stream.

States should make greater use of the 1332 waiver process to implement market-based innovations that increase health care choices and reduce costs. Federal legislation to establish such programs is unnecessary and could have the effect of suppressing state innovation.

Congress should instead adopt policies that support and encourage such innovation. The most effective way to facilitate state innovation is for Congress to enact the Health Care Choices Proposal.REF The proposal would restructure federal spending on premium subsidies and Medicaid expansion into grants to states, and gives states the option of regulatory relief from federal insurance mandates. States would use this new flexibility to reinvigorate broken private insurance markets and focus subsidy funds on low-income households and those in greatest medical need. States would be required to use a portion of their federal allotment to finance risk-mitigation strategies, which have proven effective at reducing premiums. And, every individual who qualifies for a subsidy would be able to apply it to coverage of his choice.

An economic analysis of the proposal found that it would reduce individual health insurance premiums by up to 32 percent, maintain coverage levels, increase the number of people with private insurance, reduce Medicaid spending, and achieve some deficit reduction.REF

The experience with risk-mitigation waivers shows that affording the states relief from the ACA’s strictures, as well as the flexibility to pursue innovative reforms, has made health insurance more affordable. Congress should build on these findings by restructuring federal programs to maximize this flexibility.

Doug Badger is a Visiting Fellow in Domestic Policy Studies, of the Institute for Family, Community, and Opportunity, at The Heritage Foundation.