Throughout much of last year, critics of the White House darkly warned that “Trump sabotage” of Obamacare would result in steep increases in premiums for Obamacare plans.

They predicted that Congress’ repeal of the tax penalty on the uninsured, coupled with an administration rule lifting federal restrictions on short-term policies, would lead to double-digit premium increases in 2019.

The good news is that none of that has happened. To the contrary, average premiums for “benchmark” plans—policies whose premiums are used in calculating premium subsidies—declined slightly (0.83%) in 2019, for the first time in the program’s history.

The better news is that this overall decline was driven by seven states (Alaska, Maine, Maryland, Minnesota, New Jersey, Oregon and Wisconsin) that obtained waivers to deviate from certain Obamacare mandates. 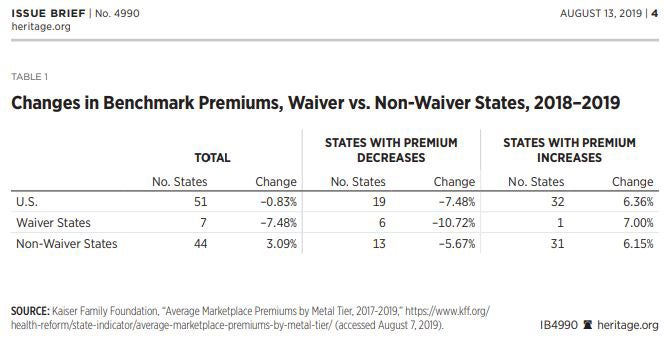 States can obtain waivers to tap federal money that the government would otherwise have transferred directly to insurance companies as premium subsidies and use that money instead to pursue innovative reforms.

Those arrangements must be budget neutral to the federal government.

The waivers that have been granted most commonly are for risk-stabilization programs. Although these programs vary from state to state, they follow the same general pattern: States blend federal premium-subsidy money with funds from non-federal sources to create a fund that helps pay claims for policyholders at risk of incurring high medical bills.

States must submit actuarial analyses showing that their arrangements would not increase federal spending.

Premiums for benchmark plans in 2019 are lower in six of the seven states that have such waivers in place.

The median premium decrease in those six states was 10.72%. Premiums rose by a median of 6.32% in 31 of the 44 states and the District of Columbia that did not obtain waivers.

>>>The Right Way to Overhaul Our Health Care System

As of this writing, five additional states are seeking waivers for the 2020 plan year. Actuarial analyses submitted by those states forecast premium declines ranging from 5.9% to 19.8%.

These states are pioneering the way toward making health care more affordable by chipping away at Obamacare’s rigidities.

The law’s architects adopted a Washington-knows-best approach, believing that the law’s tangle of mandates, subsidies, and penalties would result in 27 million people enrolling in exchange-based coverage.

An estimated 13.7 million people have individual health insurance policies, including policies sold on and off the exchanges, roughly half as many as the Congressional Budget Office forecast. That number has been shrinking since 2016, as premiums rose beyond the reach of people who don’t qualify for government subsidies.

They were wrong again. Premiums, driven by the seven states that obtained waivers, fell.

There’s little evidence that the mandate repeal or the Trump administration regulations led to an exodus of people in reasonably good health from the exchanges. Exchange enrollment held steady at 10.6 million.

Had healthy people dropped out in any sizable number, average medical claims would have risen by a far larger amount.

What Should Be Next for States?

Risk-mitigation waivers are just the beginning of what’s possible.

States should take advantage of that opportunity.

What Congress Can Do

Congress should go further by converting Obamacare’s premium subsidies and Medicaid expansion entitlements into fixed grants that states could use to design and administer programs that increase health care choices and reduce costs.

The Health Care Choices proposal, endorsed by more than 100 conservative leaders from across the country, outlines how such grants could be structured to finance the development of consumer-centered programs adapted to the circumstances of each state.

Congress should pursue that reform.