Politicians and activists have opportunistically twisted the issue into a sensational conspiracy theory.

There was an important downward trend for Congress to investigate: a reduction in key Postal Service performance metrics starting in late June.

Hopefully, Congress can move beyond the current made-for-TV dramatics and agree to workable reforms before it is too late.

Postmaster General Louis DeJoy has faced withering criticism over the last several weeks, with many public figures falsely accusing him of jailable offenses and sabotage of the U.S. Postal Service.

Many of the false charges stem from a good-faith initiative to improve efficiency and reduce the Postal Service’s chronic financial losses, which unfortunately was not properly communicated to Congress or the general public. As a result, politicians and activists have opportunistically twisted the issue into a sensational conspiracy theory.

This situation came to a head over a span of four days, and two congressional hearings have helped sort out fact from fiction.

On Friday, Aug. 21, the Senate Homeland Security and Government Affairs Committee held a virtual hearing with DeJoy to discuss postal operations. The next day, the House passed a bill that would provide an unnecessary $25 billion bailout to the Postal Service and block a number of cost-saving measures.

On Monday, Aug. 24, the House Committee on Oversight and Reform held a long and often contentious in-person hearing with DeJoy, oddly enough taking place after the legislative action rather than before.

Setting aside far-fetched accusations and partisan talking points, there was an important downward trend for Congress to investigate: a reduction in key Postal Service performance metrics starting in late June.

While the Postal Service has fallen well short of its goals for on-time delivery for the last several years, the recent drop was steep, and during a time of the year when mail volume is typically low.

There are two major factors behind the recent drop in on-time delivery.

The first factor: the Postal Service—along with the rest of the nation—was struck by the nationwide increase in COVID-19 infections starting in mid-June. Thousands of postal workers have been infected or had to perform a two-week quarantine over the last few months, resulting in far less Postal Service personnel available to sort and deliver causing serious problems a given day’s mail volume.

During his testimony, DeJoy mentioned that the Philadelphia area alone has at times been short hundreds of postal delivery drivers. This would necessarily reduce on-time performance.

The second factor had to do with an initiative (now suspended) started by DeJoy to change how the Postal Service manages its sorting and deliveries.

Rather than a nefarious plot to deliberately undermine the Postal Service and somehow steal the presidential election, the initiative was a response to an optimization report produced by the Postal Service Office of Inspectors General.

This report, coincidentally issued on DeJoy’s first day as postmaster general, pointed out over $4 billion in sorting and delivery overtime costs per year. These costs are a huge factor in the Postal Service’s chronic deficits. Addressing the costs through logistical improvements would help prevent a postal bankruptcy that is currently expected as soon as next summer.

The key component of DeJoy’s initiative was to focus on increasing on-time departure for postal trucks from sorting facilities, meaning deliveries would finish earlier and reduce the amount of overtime required.

While the plan did successfully increase on-time departures, there was a side effect: mail that had not finished being sorted and processed was left behind, increasing the level of late deliveries. DeJoy acknowledged this in the hearings, adding that he anticipated an adjustment period. The eventual goal was also to improve delivery times, but the adjustment was harder than expected.

There are ways the plan could have been implemented better, including starting at a smaller scale and then waiting until after the pandemic is under control to fully roll out.

However, the most important mistake was the lack of communication and transparency surrounding the initiative.

Instead of making a public announcement and preparing briefing materials for Congress, the plan was simply started following internal deliberations. Such an approach would have made sense in the private sector, where DeJoy spent several decades as a leader in the logistics industry.

Yet with an institution as large and visible as the Postal Service, it is vital to provide details in order to ensure that the general public and legislators alike are informed about the new process.

This lack of communication served to make disinformation and confusion easier to spread. The media began covering the story based on leaked memos, immediately casting the plan in the worst possible light.

A general failure to provide information also made it easier for a wide variety of myths to circulate freely online, whipping the public into a frenzy and turning the Postal Service into a political football.

For example, one of the myths revolved around postal collection blue boxes being removed. DeJoy’s Senate testimony included data on showing that the number of removals in 2020 is less than half the rate seen in 2013, 2014, and 2017. This data should have been sent in a tweet or press release quickly after the myth began circulating.

Similarly, the removal of postal sorting machines from locations across the country has become one of the most heated points of criticism by congressional Democrats.

Rather than starting under DeJoy’s leadership (as his critics claim), the removals are part of a normal process by the Postal Service to operate efficiently in response to the long-term decline in mail volume. Many sorting machines run far below max capacity. Some are no longer used at all, taking up valuable space at postal facilities. These facts should have been publicized by the Postal Service.

Reducing wasteful spending on unnecessary machines and expensive overtime labor are two of the very limited number of ways that the Postal Service can legally cut its costs and trim chronic annual deficits. Sadly, the House postal bill would block many of these necessary operational adjustments. 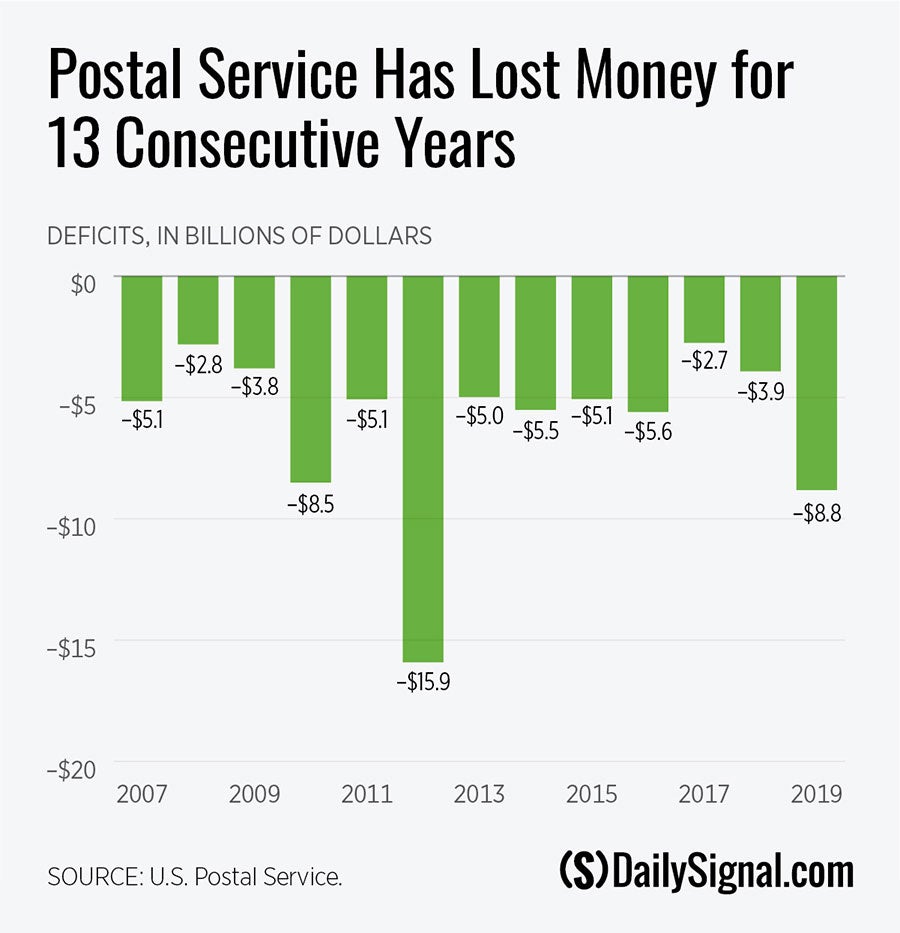 Insufficient communication was also present prior to DeJoy’s arrival. During the spring, there was a political panic about the Postal Service supposedly going bankrupt before the end of the year, leading to calls for an immediate massive bailout.

As it turned out, postal revenues have gone up slightly in the wake of COVID-19 due to a sharp increase in package deliveries, providing a reprieve from bankruptcy. Unfortunately, this information did not become public for several weeks, giving postal bailout advocates free rein to make apocalyptic claims and shape the debate.

Addressing the looming insolvency of the Postal Service was already set to be an extremely difficult task. That task becomes more difficult when legislators and the public lack the facts necessary to come to informed conclusions, and becomes nearly impossible in the wake of irresponsible accusations made against DeJoy.

Hopefully, Congress can move beyond the current made-for-TV dramatics and agree to workable reforms before it is too late.

An Urgently Needed Pivot to End COVID and Cure Lockdowns