One of the primary reasons the United States is now the world’s leader in both natural gas and oil production is that centuries’ worth of oil, natural gas, and coal resources lie beneath private property as well as under lands owned by individual states. While federally owned lands are also full of energy potential, a bureaucratic regulatory regime has mismanaged land use for decades.

The tremendous economic benefits of open energy markets and the proven track record of the individual states’ regulatory structures dictate a re-examination of the way the federal government manages resources on federal lands. The Federal Lands Freedom Act, introduced by Representative Diane Black (R–TN) and Senator James Inhofe (R–OK), gives states the authority to administer leasing, permitting, and regulatory programs for development of all energy resources on federal lands. States are already well positioned to help make a transition to better management of these resources. While Congress should pursue opportunities to reduce the size of the federal estate, the Federal Lands Freedom Act is a significant step toward better management of America’s lands and natural resources.

Inefficient Federal Management. The federal estate is massive, consisting of some 635 million acres. The effective footprint is perhaps even larger as limitations on federal lands often impact the use of adjacent state and private lands, and as government agencies lock up lands through informal designations and study areas.

The sheer size and diversity of the federal estate and the resources both above and below ground are too much for distant federal bureaucracies and an overextended federal budget to manage effectively. For instance, the Department of the Interior’s Bureau of Land Management (BLM) announced in 2011 that it was nearing completion of a two-year backlog of oil and gas leases in Wyoming, tying up more than $50 million in lease sales.[1] In 1988, the BLM, which oversees 248 million acres of federal land and 700 million acres of underground mineral resources, leased 12.2 million acres; only one-tenth of that was made available in 2014.[2] 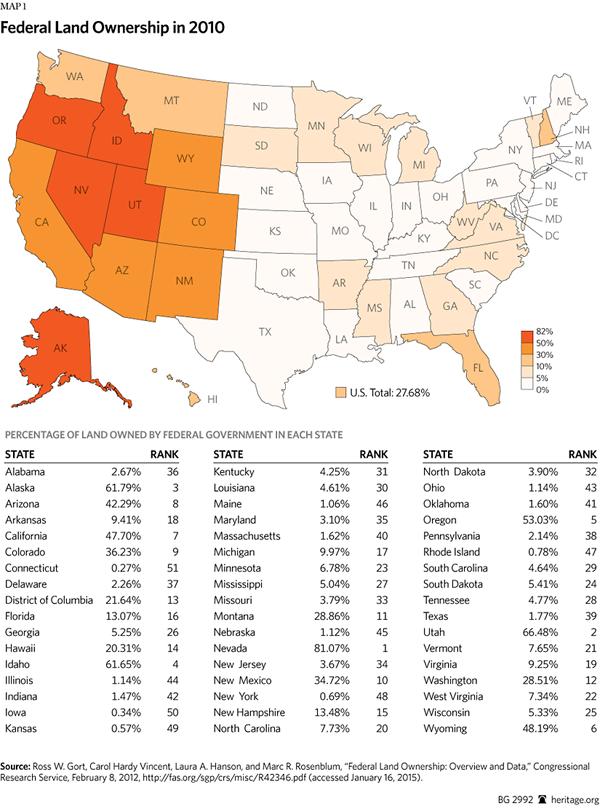 Conversely, paperwork and regulatory hoops seem to have increased. The BLM estimates that it took an average of 227 days simply to complete a drill application—just one step in the approval process to harvest oil and gas resources on federal lands. This is compared to 154 days in 2005 and the average 30 days it takes state governments to do the same.[3] It should hardly be assumed that the time spent on arduous paperwork improves environmental protection.

Further, federal ownership is a disincentive to production on state and private lands adjacent to or interspersed with federal lands. Production on federal lands is much more time-consuming and expensive, so drilling may make economic sense only if a company has access to both the federal land and the non-federal land.

Benefits of New Management. Under the Federal Lands Freedom Act, states will be able to develop a regulatory program for energy development on federal lands and submit the program to the Departments of the Interior, Energy, and Agriculture. This would be sufficient in lieu of redundant federal requirements, such as the National Environmental Policy Act. The bill also does not include Indian lands, national parks, or congressionally designated wilderness areas. While very few benefit from stagnant production on federal lands, many would benefit from the new management that the Federal Lands Freedom Act recommends:

A Path to Economic Growth and Environmental Protection

States share the cost of the maintenance of federal lands, whether by the liability of no management, the lost opportunity of poor management, or the infrastructure needed to support development of resources. States have a proven record of managing resources, and already have the regulatory structures in place to do so on federal lands within their boundaries as well. Not only would new management multiply benefits for all Americans, it would also encourage better care of the environment and natural resources by putting them in the hands of people who have an immediate stake in wise management.

[3] Bureau of Land Management, “Average Application for Permit to Drill (APD) Approval Timeframes: FY2005–FY2014,” January 6, 2015, http://www.blm.gov/wo/st/en/prog/energy/oil_and_gas/statistics/apd_chart.html (accessed January 14, 2015). Even these numbers are questionable according to a Freedom of Information Act (FOIA) request by Norton Rose Fulbright Global Legal Practice, and average days heavily depend on the related field office. For example, according to the FOIAed BLM data, the average number of days to approve a permit to drill at the Moab, UT, office was 579 days in FY 2011. Norton Rose Fulbright, “Western Lands and Energy Newsletter,” June 26, 2013, http://www.nortonrosefulbright.com/knowledge/publications/100086/western-lands-and-energy-newsletter (accessed January 7, 2015).

Why International Climate Summits Are Doomed to Fail, Part 2: Upward Mobility for Poor Depends on Energy

Why International Climate Summits Are Doomed to Fail, Part 1: Aspirations Untethered From Reality