Unfairly forcing taxpayers to take on the broken pension promises of private and public sector unions would raise that threat level.

This marks an enormous increase. Even after adjusting for inflation, it’s a jump of $60,000 over just 10 years for the average household.

In other words, even after accounting for inflation, the U.S. added more debt per household over the past 10 years than it did over its first 200 years.

Low interest rates today make our debt seemingly manageable, but the higher America’s debt grows, the more likely it is that rates could suddenly spike, sending terrible shocks throughout the economy.

Now, an obscure pension “fix” could hasten such a shock by opening the door to massive pension bailouts that could push our $23 trillion debt closer to $30 trillion, or $230,000 per household.

Unbeknownst to most Americans, Congress is considering legislation to “fix” underfunded private union pension plans that have promised at least $638 billion more in pension benefits than they’ve set aside to pay.

The “fix” that mismanaged pension plans have lobbied Congress for is to shift those broken promises onto taxpayers. Politicians who receive hefty donations from unions, along with some lawmakers who have lots of constituents that would benefit from a taxpayer bailout, are pushing for just that—a massive bailout without reform.

Because the proposed bailouts do nothing to penalize plans for their past recklessness and nothing to impose proper funding requirements going forward, those plans’ unfunded obligations would only rise further.

But this time, it would be on the taxpayers’ dime.

Worse, if Congress bails out private union pension plans, how will it say no to teachers, police, and firefighters who come to the federal government asking for a bailout of their state and local pensions that have an estimated $4 trillion to $6 trillion in unfunded pension promises?

Tacking as much as $6.7 trillion onto our national debt to cover broken pension promises would raise the average household’s debt burden by $52,000, to $230,000.

And that would come before Congress tackles Social Security’s $13.9 trillion shortfall that would require an additional $108,000 per household to fix.

All told, the current deficit plus Social Security’s and private and public pension plans’ shortfalls would amount to about $338,000 in debt for the average household.

America’s debt already threatens our freedom and prosperity. Unfairly forcing taxpayers to take on the broken pension promises of private and public sector unions would raise that threat level. 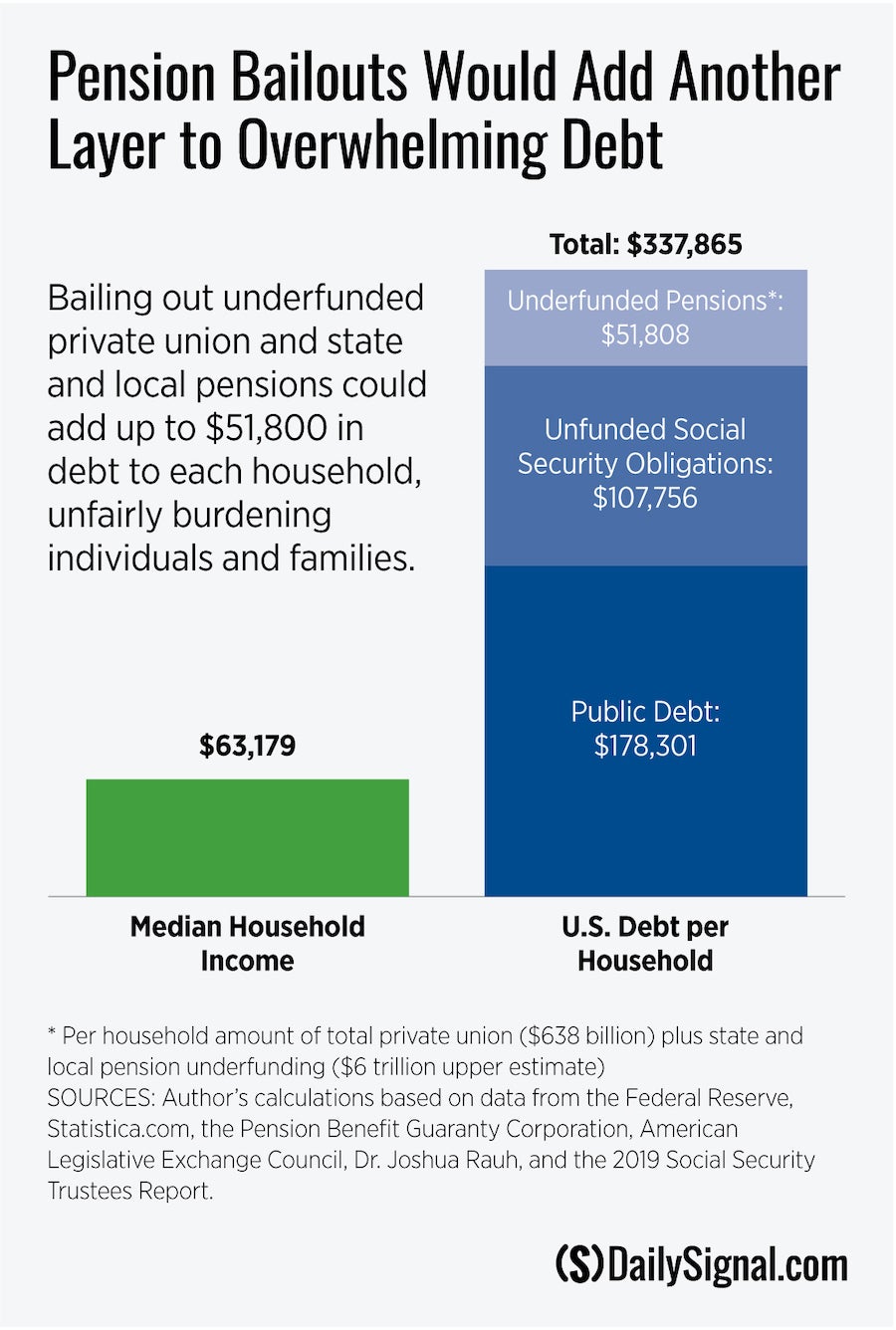 Congress should help alleviate and prevent pension shortfalls—but not through taxpayer bailouts.

First, policymakers must tackle Social Security’s unfunded promises by updating the program and better focusing benefits on those who need them most.

Doing so would prevent massive tax increases—an additional $1,000 to $2,000 per year for middle-class households—on workers.

Congress should then address pension underfunding by maintaining the solvency of its pension insurance program and by enforcing proper funding rules to hold employers and unions liable for the benefits they promise.