Abstract: The United States faces a real fiscal crisis, and the impending fiscal cliff of massive tax hikes and spending cuts in January is only the first act. In early 2013, the federal government will exhaust its ability to issue debt legally. Yet as large and as major a concern as federal budget deficits are today, they are of secondary consequence compared with the fiscal quagmire of unaffordable entitlement spending in the next decade. Fortunately, the entitlement problem can be resolved by six simple reforms to improve the fiscal future for Social Security and Medicare. But to implement these reforms, President Barack Obama must lead.

A high-stakes fiscal policy debate of unique size and import has just begun. Absent congressional action to the contrary, a massive slate of tax hikes and spending cuts will take effect on January 1, and that is only the first act. The second act will occur early in 2013 when the federal government will exhaust its ability to issue debt legally. Both acts need prompt solutions.

Speaker of the House John Boehner (R–OH) made the first move. After congratulating President Barack Obama upon his reelection, Boehner promised a willingness to work with him, giving Obama the additional revenues he desired through pro-growth tax reform accompanied by reforms in entitlement programs.[1] President Obama's counter, while unsurprising, was unhelpful because he focused exclusively on fiscally meaningless and economically harmful tax hikes on upper-income taxpayers. The President repeatedly has argued for a balanced approach, but he has yet to offer a single meaningful proposal on spending reductions.

While the President prepares to start his second term, he should set about negotiating in good faith with Republicans, especially in the House where Republicans were returned to office in the majority with expectations of cutting spending without increasing taxes. The voters, we are told, expect it. This means the President cannot sit back and just harp on revenues. He needs to address spending and in particular entitlements.

Fortunately, the President has occasion and opportunity to lead by proposing some simple yet transformational reforms in two of the prime sources of the nation's fiscal problems: Social Security and Medicare. Better yet, many such reforms have already been thoroughly considered and enjoy broad bipartisan support, lacking only the moment and the leadership to become a reality. These proposals will not resolve either program's key structural flaws—they constitute a start of the reform journey, not the conclusion—but they would be a powerful start that would markedly alter the nation's fiscal trajectory.

At the start of a President's second term, the political stars are in the best possible alignment for solving big problems. All the President needs to do is seize the moment. This is the moment; President Obama must lead.

Fiscal Cliff: By Design, Not by Chance

Many events arrive by chance, but the present fiscal spectacle is not one of them. The fiscal cliff results from explicit actions by Congress and the President to push difficult fiscal policy issues past the recent election. In this, they succeeded, although it took a series of legislative acts to accomplish it. With regard to taxes:

The same pattern holds for the spending cuts. For example, the sequester slated to gouge defense spending while making modest cuts—such as a 2 percent across-the-board cut to Medicare providers—reflects the final leavings of the earlier Budget Control Act, which created the failed "supercommittee." Early in 2012, Congress also prevented deep and disastrous reductions in Medicare provider payments, but this "doc fix" remedy expires at the end of the year.

In May 2011, the federal government exhausted its legal authority to finance deficit spending by issuing debt. The U.S. Department of the Treasury exercised its typical but limited authorities for temporarily creating more room under the "debt limit," allowing policymakers to postpone action until early August. A brutal and economically risky political battle ensued, eventually resulting in legislation that raised the debt limit by $2.1 trillion, sufficient to fund the federal government past the November election.

Projections now suggest that the government will reach the debt limit late in 2012, after which the Treasury will again deploy its limited authorities. This will trigger what could be another difficult negotiation for Congress and President Obama—a negotiation that will be heavily influenced by what happens with the fiscal cliff.

No Time for Distractions

President Obama clearly believes in raising taxes on upper-income taxpayers, and he is willing to weaken the economy, slow job growth, and constrain wage growth to do so. It is difficult to fathom his acceptance of this trade-off of economic security for an ideological doctrine of social justice, especially considering that this long-standing debate likely will rage indefinitely. However, these tax hikes are a distant sideshow in the present context, a political distraction that diverts attention from the central fiscal issue of runaway spending, which gives rise to persistent and economically dangerous deficits.

In his own budget, the President proposed to extend the Bush tax cuts except for those making $250,000 or more, raising $836 billion over the next 10 years. His companion proposal to limit the value of deductions for upper-income taxpayers would raise another $574 billion, for a total of $1.4 trillion. In absolute terms, that is a lot of revenue. However, even allowing for all the other budget gimmicks and tax hikes in Obama's budget, the federal debt would rise by $7.7 trillion over the next 10 years including these tax hikes and by $9.1 trillion without them.

As large and as major a concern as federal budget deficits are today, they are nevertheless secondary in consequence to the fiscal quagmire of unaffordable entitlements. Social Security and Medicare in particular share certain vital characteristics. Both programs are extraordinarily complicated, having been built up in complexity over the years one Congress at a time. Similarly, each program badly needs programmatic reforms. For example, the minimum benefit in Social Security is woefully inadequate to protect low-income seniors from poverty, and Medicare still lacks a catastrophic benefit. These are only some of the many shortcomings that must be addressed in fundamental overhauls of each program.

Of most immediate concern, however, is that Social Security and Medicare are unaffordable in their current forms. When this year's kindergarteners enter college, just 13 years away, spending on these two programs plus Medicaid and interest on the debt will devour all tax revenue. (See Chart 1.) 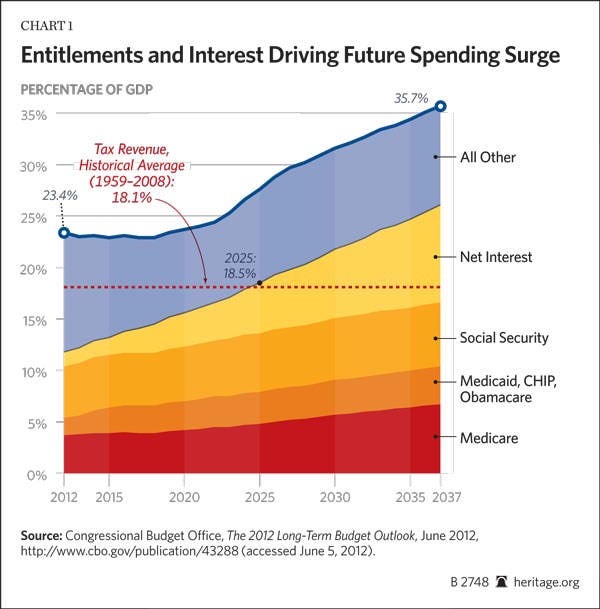 Social Security will lack the funds to pay full benefits beginning as early as 2033.[3] Medicare's unfunded promises in current dollars reach into the many tens of trillions of dollars. These facts are not in dispute. Solutions to our fiscal challenges are needed, urgent, and inevitable.

The fiscal cliff and the debt limit have set the stage, but there is also the reality of the rhythms in the American political system. There are certain windows in every four-year or eight-year cycle when bold leaders can achieve bold things. The first few months of a reelected President's second term is one such window, but it closes fast, and lame-duck status arrives quickly.

Thus, the President must adopt the mantle of leadership, rather than brinksmanship, to steer the nation away from the fiscal cliff and all that is set to follow, and he must start with spending. However, the critical silver lining is that simple, commonsense, and thoroughly vetted solutions such as the four listed below constitute a strong start on the journey to more complete programmatic reforms remedying acknowledged flaws in these programs, and they already enjoy broad support across the political spectrum.

The four foregoing proposals for Social Security and Medicare meet the test of simplicity, being relatively easy to communicate to the American people, having been thoroughly vetted, and enjoying widespread support. Together, they would dramatically improve America's fiscal future for the better. Two additional proposals, one each for Social Security and Medicare, meet the tests of simplicity and effectiveness but have not been considered as intensively. Yet they should also garner bipartisan support and consideration.

The nation's fiscal problems, today and beyond, derive entirely from excess spending, especially entitlement spending, not a dearth of revenue. While current revenues are exceptionally low as a share of the economy, this is due almost entirely to the weak economy. As analysis by the Administration's budget office and the Congressional Budget Office affirm, revenues will return to a more normal 18.5 percent of the economy as the economy recovers. Given these facts, President Obama's insistence on an economically harmful tax hike for what is essentially a fiscally meaningless increase in revenues will not help policymakers navigate successfully around the fiscal cliff.

A hopeful sign, however, is that the political timing is propitious, and important policy reforms in Social Security and Medicare are simple, straightforward, and well known. These proposals, while not correcting more fundamental programmatic flaws, would materially correct the spending excesses in these programs. Better yet, these proposals are not partisan in nature, but have been supported on a bipartisan basis in the past.

All that is lacking to avoid the fiscal cliff, profoundly stabilize the nation's public finances, and shore up these critical entitlement programs is for the President to take the lead. The nation waits.

—J. D. Foster, Ph.D., is Norman B. Ture Senior Fellow in the Economics of Fiscal Policy in and Alison Acosta Fraser is Director of the Thomas A. Roe Institute for Economic Policy Studies at The Heritage Foundation.

[5] The Social Security actuaries have considered in particular a modern measure of inflation known as “chained CPI” (C-CPI). Price indices of this sort are constructed by looking at a basket of goods and services to proxy all consumer purchases. The traditional CPI rarely changes the basket and thus steadily becomes a less accurate proxy as the pattern of consumer purchases changes. The more modern C-CPI, relying on advances in economic theory, updates this reference basket regularly and thus better proxies consumer purchases.

Former Norman B. Ture Senior Fellow in the Economics of Fiscal Policy

Former Senior Fellow and Director of the Roe Institute

Fact-Checking Team Biden on Who Those 87,000 New IRS Agents Would Audit

Prepare To Pay More Under the So-Called Inflation Reduction Act