Why Congress Must Preserve and Extend the 2011 Spending Caps

Why Congress Must Preserve and Extend the 2011 Spending Caps

The Budget Control Act, passed in 2011, is one of the few mechanisms currently in place to control Congress’ appetite for spending.

With the national debt projected to skyrocket over the next decade, now is not the time to abandon it. An upcoming report this week from The Heritage Foundation will detail the ways Congress can strengthen this tool rather than weaken it.

Under the threat of credit default and economic upheaval, Congress passed the Budget Control Act as a means to increase the statutory debt limit by more than $2 trillion. It did so, however, in return for offsetting cuts to federal spending.

Congress imposed these cuts through discretionary spending caps and an annual sequestration of non-exempt mandatory programs through 2021.

At the time of its passage, the Congressional Budget Office estimatedthat the Budget Control Act would lower discretionary spending by $813 billion over 10 years.

While the act has been effective at slowing the growth of discretionary spending, Congress has continually undermined the caps through budget deals that increase spending.

Through fiscal year 2017, Congress had modified the Budget Control Act on three separate occasions, raising discretionary spending by $167 billion. While some of these increases were offset by legitimate reforms to mandatory programs, far too much was “paid for” through the use of dubious offsets and budget gimmicks. 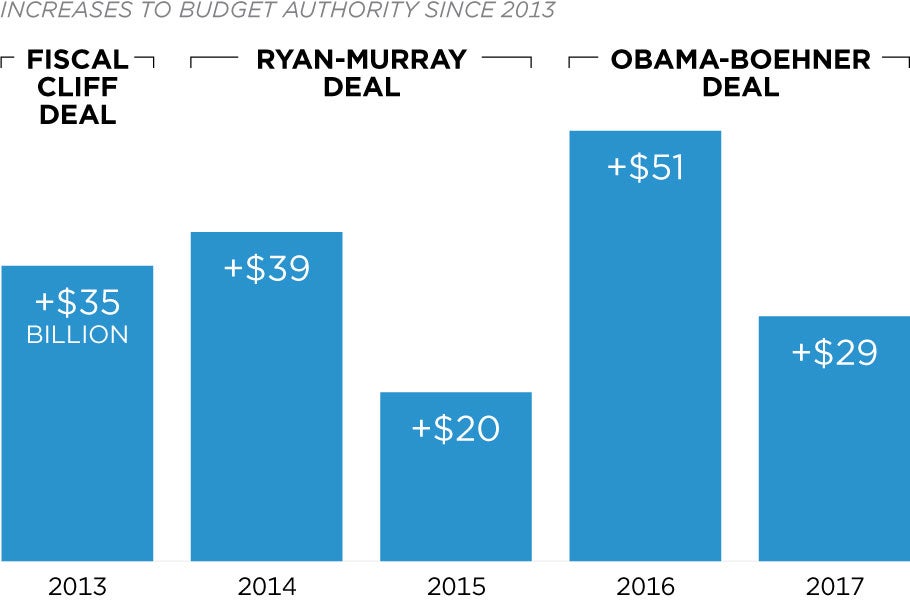 One of the fundamental flaws of the Budget Control Act is that rather than implementing an aggregate cap on all discretionary spending, it created individual caps for defense and non-defense categories.

Because of this, defense spending has faced a disproportionate share of the budget cuts, undermining the military and putting America at risk.

The need for higher defense spending above the Budget Control Act level has created a dynamic in which big-spending lawmakers hold defense increases hostage in exchange for higher domestic spending levels.

In September, Congress passed a continuing resolution that provides government funding and a suspension of the debt limit through Dec. 8.

The failure of regular order and the stalemate on full-year spending measures means that Congress is likely headed toward a deal to increase the Budget Control Act caps in 2018 and beyond, similar to the one struck between President Barack Obama and House Speaker John Boehner in 2015.

Congress should reject this failed policy template and instead seize the upcoming budget debate as an opportunity to recommit to fiscal responsibility.

To do so, Congress should follow the lead of the Heritage Foundation’s “Blueprint for Balance: A Federal Budget for Fiscal Year 2018.” The blueprint calls for the elimination of the defense/non-defense firewall and makes much needed increases to national defense spending, with cuts to wasteful and duplicative domestic programs.

The blueprint assumes that the Budget Control Act caps would be permanently extended.

This approach would save taxpayers nearly $1.7 trillion in the next decade, but empower state and local governments, and improve the business climate nationwide, spreading new opportunity for all Americans.

Later this week, The Heritage Foundation will release a report on the Budget Control Act. The paper will look back at the history of the act—including the events that led to its passage and its implementation up to this point—and will make recommendations for strengthening and extending the act through fiscal year 2021 and beyond.

In particular, the paper will call for commonsense budget reforms that would strengthen the budget process and increase oversight and accountability.

Spending is out of control in Washington, and the Budget Control Act is one of the few tools in place that pulls Congress toward fiscal discipline. .

Rather than rejecting this tool, Congress should reform and strengthen it and extend its spending limits indefinitely, creating more incentives to reduce government spending in the future.