Here Are the 5 Worst Budget Blunders of the 115th Congress

Here Are the 5 Worst Budget Blunders of the 115th Congress

The Roman philosopher Seneca wrote that “every new beginning comes from some other beginning’s end.” As Washington anticipates the start of the 116th Congress on Jan. 3, it marks the end of the 115th.

In some ways, it was a successful two years. For the first time in over 30 years, Congress passed comprehensive tax reform legislation. The economy is strong and unemployment sits at just 3.7 percent.

Here are five budget blunders of the 115th Congress.

The biggest budget buster of the 115th Congress came in February with the passage of Bipartisan Budget Act of 2018, which raised the Budget Control Act spending caps for a third time. The previous two cap deals were bad, but this one took the cake. It more than doubled the spending increase in the previous two deals combined, increasing spending by nearly $300 billion over two years and paying for almost none of it.

Fiscal year 2020 is just around the corner. The massive funding increase of the Bipartisan Budget Act created a budget cliff. It would take a spending increase of $125 billion just to maintain fiscal year 2019 levels, leading many in Congress to assume that another deal is inevitable. 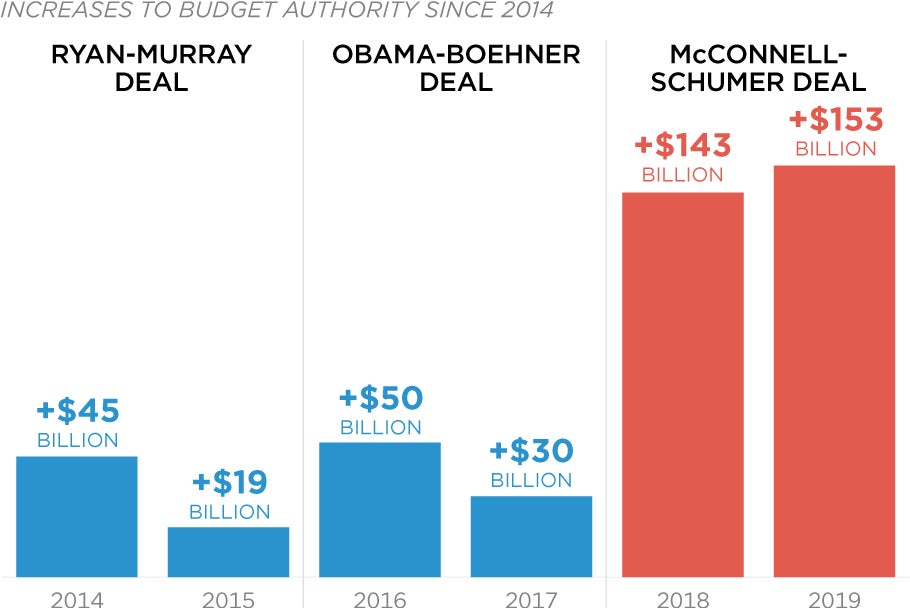 It doesn’t have to be, though. Earlier this year, Trump directed his Cabinet to cut spending by 5 percent in 2020. This, combined with other options, could save at least $125 billion and avoid another massive budget deal.

2017 saw the U.S. take the full force of three major hurricanes. Those hurricanes impacted millions of people and caused hundreds of billions of dollars in estimated damages.

In response to the hurricanes, Congress passed a series of emergency spending bills totaling over $136 billion in new spending, all of which was exempt from the Budget Control Act spending caps.

Sometimes it is necessary for Congress to provide unplanned supplemental appropriations. Still, those funds should only go toward direct response and recovery efforts, and new spending should be paid for.

Neither was the case with these packages. FEMA is the primary disaster response team in the U.S., yet less than $50 billion of the $136 billion in funding went to FEMA. By contrast, the Department of Housing and Urban Development received over $35 billion for community development grants—a program with debatable effectiveness that has no direct role in disaster response and recovery.

3. Failure to pass a fiscal year 2019 budget and pursue reconciliation.

One of the duties delegated to Congress by the 1974 Budget Act is to complete a budget resolution each year. The law also sets forth a process known as reconciliation, which grants Congress an expedited procedure to pass legislation to meet spending, revenue, and debt levels laid out by the budget.

This process was most recently used to pass the Tax Cuts and Jobs Act in December 2017.

After the success of tax reform, Congress should have followed up with another reconciliation bill for fiscal year 2019 with the goal of cutting spending. Not only did Congress fail to pass a reconciliation bill, neither chamber even brought a budget resolution to the floor.

Budget resolutions are important documents that lay out priorities for the upcoming 10 years. Even more importantly, they are the only way to unlock reconciliation and make it easier to pass important reforms. Congress should not have wasted this key opportunity to reduce the deficit.

4. Failure of the Joint Select Committee on Budget and Appropriations Reform.

One of the few positives to come out of the Bipartisan Budget Act of 2018 was the establishment of a joint committee tasked with reforming the budget and appropriations process. The hope in forming the committee was that it could in part help avoid massive budget deals like the one that created it.

Early on, however, it became clear that the committee was not interested in the substantive reforms needed to curb Washington’s spending addiction and put the budget on a sustainable path. It didn’t even consider modest reforms that could help improve the process.

The proposal that gained the most traction was for Congress to budget less often, by adopting a biennial budget cycle and essentially reducing its budget obligations.

Ultimately, the committee failed to reach consensus on any reforms, wasting another opportunity to improve the federal budget process and allowing well-known problems to continue to fester.

5. Undermining the Tax Cuts and Jobs Act by not pairing it with spending cuts.

The Tax Cuts and Jobs Act was the first comprehensive tax reform package passed by Congress since 1986. It has been successful at boosting economic growth and moving the unemployment rate to the lowest level it’s been in almost 50 years.

Still, tax reform could have had more impact and longevity if it had been paired with spending cuts. The two go hand in hand. If left unaddressed, the deficit will force taxes to increase and the debt could lead to a fiscal collapse and a major economic slowdown, wiping out much of the progress tax reform initiated.

If the Tax Cuts and Jobs Act had been paired with spending cuts and pro-growth tax policies, individual tax rates could have been even lower and extended permanently, boosting growth in the long run and securing tax reform’s gains.

Instead, Congress will likely spend the next few years pushing for “Tax Reform 2.0,” and the tax cuts currently in place are at risk of being reversed as deficit pressures rise. The future of the law remains unclear, with some previsions beginning to phase out in 2022.

While the 115th Congress did have success in passing tax reform, a whole list of budget blunders further undermined our country’s precarious situation. Budget projections are getting worse, not better. It will take bold leadership and serious reforms for the 116th Congress to get spending on the right track.