China's financial behavior is increasingly important to the United States and the international community. The China Global Investment Tracker created by The Heritage Foundation is the only publicly available, comprehensive dataset of large worldwide Chinese investments and contracts beyond Treasury bonds. Details are available on over 250 attempted transactions -- failed and successful -- over $100 million in all major industries, including energy, mining, transportation and banking. 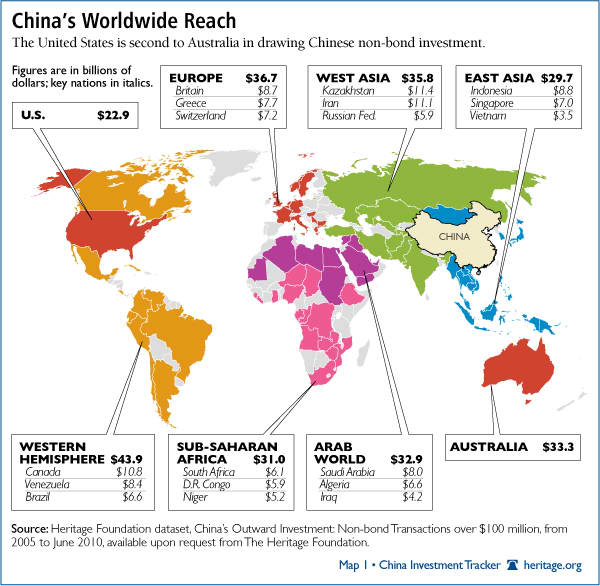 Chinese investment and business contracts now span the globe. More business of these types is now being done in the Western Hemisphere than with China's traditional partners in East Asia. 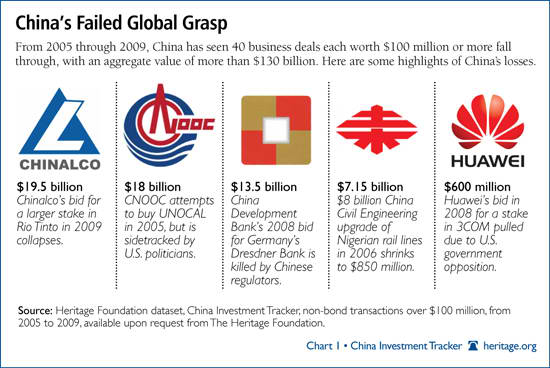 China's investment total could be higher. Over $100 billion in proposed spending has been rejected by foreign or Chinese regulators or has failed due to mistakes by Chinese firms. However, the number of failed transactions is falling and there are clear signs Chinese firms are learning to be better investors.

For more information on the growing Chinese investments:

Chinese Foreign Investment: Insist on Transparency
China holds more than $1 trillion in American bonds. According to the new Heritage Foundation database on recent Chinese foreign non-bond investment, China has invested more than $15 billion in the U.S. in addition to bonds. China's SAFE is the largest foreign investor in the U.S., but has refused to make its activities more transparent. An American priority should be to enhance transparency in SAFE's spending.

Misses As Well As Hits
China's biggest investment yet turns into its biggest investment failure yet, when China Aluminum's $20 billion offer for 20% of metals giant Rio Tinto is stalled by Australian regulators, criticized by stockholders, and ultimately rejected.

The U.S. Is Losing the Developing World to China

Rogue Superpower: China Is a Global Pariah and Shows No Remorse