While there has been much bipartisan fanfare regarding this “long-term” bill, the proposal is fiscally irresponsible and was dubiously crafted. The bill does not include any meaningful reforms to address the structural problems in highway funding, while making many of the problems worse by increasing spending out of the deeply troubled Highway Trust Fund that has already required $73 billion in bailouts since 2008.[1] FAST should be regarded as yet another bailout of the Highway Trust Fund that would leave federal highway financing even worse off when the bill’s money runs out.

The FAST Act: A Funding Bait and Switch

Following an extensive period of time in which House and Senate conferees worked out a compromise between the STRR and DRIVE Acts, the conference reported FAST on December 1. Rather than emerging as a compromise between the higher spending levels in DRIVE (totaling $342 billion over six years) and the baseline levels in STRR ($325 billion over six years), the final product evolved into a five-year bill that would spend more money annually than either of the original bills that passed each chamber.

Repurposed as a five-year bill with more funding, the conferees pumped FAST’s HTF spending well above previously agreed upon levels, up to $281 billion for five years compared to just $268 billion for STRR (and $280 billion for DRIVE). Also, by shortening the length of the window and increasing spending on the programs financed from the HTF, FAST virtually guarantees higher annual spending in the future.

This additional spending puts even more stress on the HTF’s already troubled finances. With its inflated funding levels, the FAST Act would increase the HTF’s projected deficit to $178 billion over the next 10 years—nearly $20 billion more than current projections. Indeed, the Congressional Budget Office (CBO) estimates that without reform, the trust fund would exhaust its reserves by 2021, requiring an additional $100 billion just to keep it solvent through 2025. 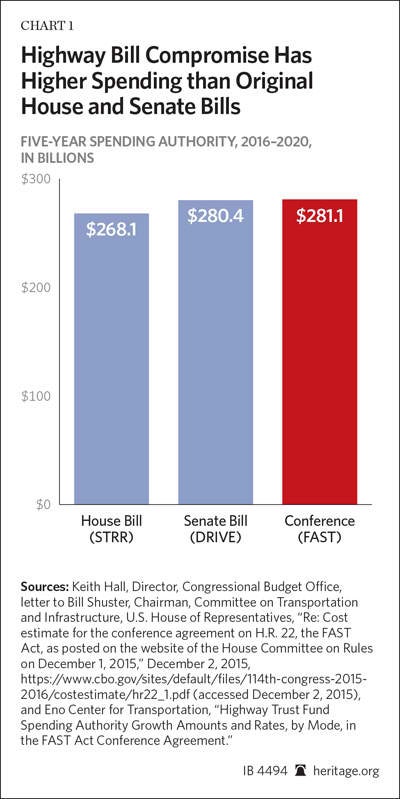 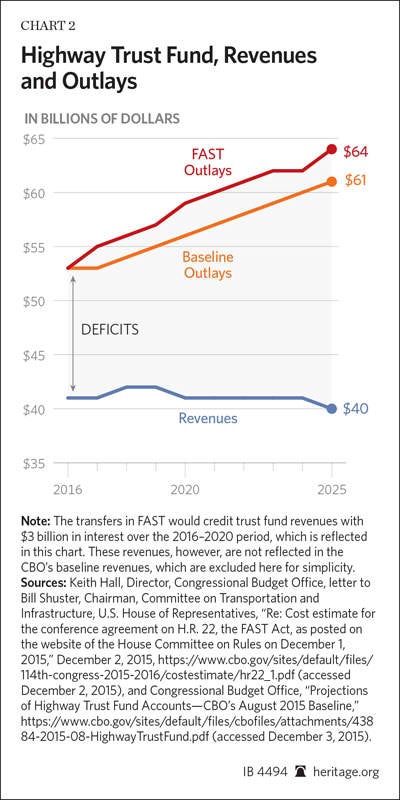 The $70.3 billion general fund transfer is nearly twice as high as the total general fund transfers the HTF has received since 2008, setting a discouraging precedent of replacing the HTF’s dedicated funding source en masse with unrelated measures. These large injections of unrelated revenues continue to erode the “user-pays” principle embodied in the gas tax, a concept that has already been chipped away by the perpetuation of unrelated provisions and pet projects in the HTF.

This fiscal negligence is enabled by a number of budget gimmicks, notably the last-minute inclusion of two controversial measures involving the Federal Reserve. These provisions are used to offset the $70 billion in HTF transfers as well as various other spending. 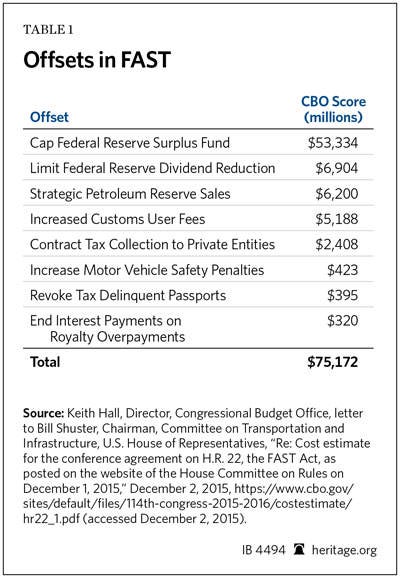 Doubling Up on the Fed: $60.2 Billion. Controversially, FAST contains both of the Federal Reserve offsets used in the House and the Senate Bills with some minor modifications. The largest offset—capping the Federal Reserve’s $29 billion surplus fund in Section 32202—was termed a budgetary “sleight-of-hand” by former Federal Reserve Chairman Ben Bernanke, because the gimmick simply shifts the timing of future cash flows between the Treasury and the Fed.[3] This offset would cap the Fed’s $29 billion surplus fund—which acts as a cushion for Fed operations—at $10 billion and remits the remainder to the Treasury so that it can be spent.

The second offset—which the surplus fund was intended to replace—would cut the Fed’s Dividend Rate that it pays to member banks, increasing the amount it can remit to Treasury. Section 32203 reduces the dividend rate for banks with excess of $10 billion from the current 6 percent to a rate tied to the high yield of the 10-year Treasury note (but no higher than 6 percent). The funds taken from changes to the Fed account for 80 percent of the funding for FAST, making a mockery of the concept of the Fed as an institution separate from the federal government.

Strategic Petroleum Sales: $6.2 Billion. Section 32204 instructs the Secretary of Energy to sell 66 million barrels of crude oil from the U.S. Strategic Petroleum Reserve over 2023–2025. The CBO estimated that the sales would reap $6.2 billion for the Treasury—an average of $94 per barrel. The current market rate for crude oil is $40.35 per barrel, less than half the price assumed in the score of the bill.[4]

Increase Customs User Fees: $5.2 Billion. Section 32201 indexes certain Customs Services user fees to inflation, such as a $5 fee “for each item of dutiable mail for which a document is prepared by a customs officer.”[5] Use of these designated user fees to fund unrelated highway spending—which is intended to have its own user fee via the gas tax—is bad policy.

Contract Tax Collection to Private Entities: $2.4 Billion. Section 32102 would authorize the Internal Revenue Service to hire private “qualified tax collection contractors,” to collect outstanding inactive tax receivables. Not only is this tax change wholly irrelevant to transportation, but the federal government has attempted this twice in the past two decades and has lost money each time.[6 ]

Increase Motor Vehicle Safety Penalties: $423 Million. Section 24110 would lift the caps for maximum civil penalties for various violations of motor vehicle safety, including those imposed on auto manufacturers. These fine increases should not be repurposed for a one-time spending increase.

Revoke Passports for Tax Delinquencies: $395 Million. Section 32101 would give the IRS the discretion to prompt the State Department to revoke or deny passports to persons with “seriously delinquent tax debt.” Further empowering the IRS to harass and inconvenience American citizens—especially those living abroad—would be ill-advised following the service’s targeting of specific nonprofit groups and myriad other abuses.[7]

End Interest Payments on Royalty Overpayments: $320 Million. Section 32301 ends the requirement for the Office of National Resources Revenue to pay interest on overpayments it receives, which has led some lessees to deliberately overpay. While ending this practice is good governance, its savings should not be used to fund additional spending.

The FAST Act does nothing to fix the broken Highway Trust Fund, but it does a great deal to make its finances worse. Under FAST, the HTF will be close to exhaustion in 2021 and will require an even larger bailout to maintain its new levels of higher spending. By relying on budget gimmicks to fund ever more spending, FAST shows that the road to compromise was simply paved by more government spending that taxpayers cannot afford. America’s infrastructure should not have to rely on funding hemmed from unrelated areas of the budget; serious thought is needed to discern how best to finance the programs moving forward. Rather than provide billions in more bailouts, the HTF needs fundamental reform that instills fiscal soundness and refocuses gas tax dollars on federal priorities.

[8] The Heritage Foundation, “Eliminate Grants to the National Rail Passenger Service Corporation (Amtrak),” in The Budget Book: 106 Ways to Reduce the Size & Scope of Government, http://budgetbook.heritage.org/transportation/eliminate-grants-national-rail-passenger-service-corporation-amtrak/.

Planes Fly on Modern IT, Not Green Dreams

The Biden Administration’s Electric Vehicle Gambit Is Illegal and Costly