Although policymakers are currently discussing an $825 billion economic stimulus package, completely eliminating capital gains and dividend taxes would be a cheaper and more effective means of sparking economic renewal.

Capable of producing a short-term stimulus, capital gains tax cuts are also a responsible pro-growth policy. Such cuts trigger an immediate stimulus because distortions on investors' behavior are eliminated. Yet there are also long-term benefits to cutting capital gains taxes cuts: a real reduction in the cost of investment.

Borrowing and spending may provide some immediate relief, but such policies reduce growth in the longer run and tend to expand government permanently. A policy of reducing tax rates allows the private sector to produce the stimulus instead, thereby avoiding such flaws.

When the financial sector and private investment are weak, as is currently the case, the best taxes to reduce are investment-related taxes. The elimination of capital gains and dividend taxes would encourage increased investment that puts more funds into the financial service sector so that the economic pipes can begin flowing again.

Not Just a Holiday--a Repeal

Because investors are burdened with paying capital gains taxes when the gain is realized through a sale of an asset, capital gains taxes are known to discourage sale of appreciated assets. The higher such taxes, the more the investor is discouraged[1]--a consequence known as the "lock-in effect." Similarly, because losses can be deducted, the sale of underperforming assets is encouraged.

During an economic crisis, the lock-in effect will not prevent investors from selling. However, the elimination of the tax would still create an immediate unlocking of another sort: the decision to buy assets.

During troubled times, buying assets at low prices increases the capital gain in the recovery. Capital gains taxes create a wedge that prevents some asset purchases that could help further the economy recovery, because the cost of the tax is built in to long-term investment decisions.

Repeal of capital gains taxes will produce an immediate stimulus effect: As soon as the taxes are repealed, there will be a boost to the financial markets as beneficial transactions are made. Other stimulus policies take time to have an effect, but tax changes on investment transactions have an immediate impact.[2]

Simultaneous repeal of both capital gains and dividends taxes is also important because repealing only capital gains taxes would divert profits more toward internal investment than toward dividend payouts. Additionally, some of this diversion would only be for a tax purpose. Tax law should strive to facilitate--not direct--sound investment decisions.

Repeal Is Not Costly and Creates Jobs

The cost of a longer-term repeal of the capital gains and dividend taxes is not as expensive as some policymakers might imagine. Analysts at The Heritage Foundation simulated the effect of the repeal in terms of static revenue losses and macroeconomic growth. The Individual Income Tax Model shows that lost revenue in 2008 would be $74 billion if losses can still be deducted up to $3,000 for the current year.[3]

This lost revenue would cost about $370 billion over five years--much less than the $850 billion over three years currently being debated in Congress.[4] The repeal of the capital loss deduction could also be phased in over this time, reducing the total cost in subsequent years. Tax filers incurring losses in 2008 based on past decisions could deduct losses, but future losses and gains would not affect tax liability.

The Tax Policy Advisers Dynamic General Equilibrium Model[5] projects that investment growth would jump to 3 percent per year for the first three years after a repeal of capital gains and dividend taxes before returning to the baseline growth of 2 percent per year. This growth would bring the economy to a new, higher level of investment. The static one-year revenue losses would be offset by increased investment, which leads to higher economic growth.

The model predicts that GDP would grow at a rate of 2.03 percent for the first three years compared to a baseline steady state of 2 percent growth. However, by year four, GDP growth reaches a new steady state growth rate of 2.1 percent per year as the increased growth in investment begins to pay off by expanding the economy's productive capacity.[6]

Due to the power of compounding, even small increases in growth, if sustained, lead to large changes over time when applied to a $12 trillion economy. Increased investment that leads to a more productive economy would strengthen the U.S. economy, making its workforce more competitive in the global marketplace.

There are other ways that the capital gains and dividends tax elimination would help the economy. Certain individuals, for whom capital gains make up a large portion of reported income, would benefit significantly. About 50 percent of filers in this group are small businesses.

Using The Heritage Foundation Individual Income Tax Model, current tax treatment was compared with a repeal of capital gains and dividends taxes. Table 1 shows how average tax burdens would differ for small businesses with capital gains. In order not to punish past decisions during a time of hardship, the simulation assumes a loss deduction. 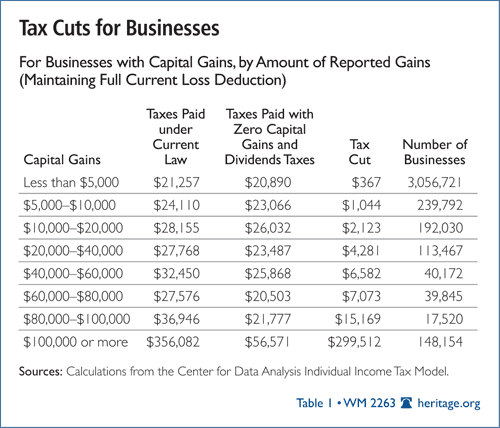 Some small businesses may be saved from failing or from letting go of workers if their tax saving is substantial. Though fewer filers would be expected to report gains this year, there will mostly still be a significant number of filers who sold stocks at the beginning of the year for a net gain. Rather than needing to cut business operations or payroll to now afford the tax on these gains, these savings could keep some of these businesses afloat. Next year the gains should return to higher levels, and the significant savings could be transformed into greater investment, driving the demand for millions of new jobs.

Most importantly, these positive economic effects are created by reducing barriers to investment and returning money to the entrepreneurs who earned it--not through subsidies, government programs, or other market distortions.

The Key to Sustainable Growth

The goal of a stimulus policy should be sustained economic growth, not a temporary masking of some of the painful symptoms of a downturn. Repealing capital gains and dividends taxes not only produces a healthy short-term stimulus, which results from the elimination of distortions caused by government policy, but it also sets the economy on a sound long-term path to growth.

Entrepreneurial investments are the key to sustainable growth. The market for investment is the most flexible when there are no taxes that distort decision-making and increase the cost of investment. Repealing the tax on capital gains and dividends will send a strong signal that the United States is open for business.[7]

Karen A. Campbell, Ph.D., is Policy Analyst, and Guinevere Nell is Research Programmer, in the Center for Data Analysis at The Heritage Foundation.

[3]All revenue and tax cut numbers in this paper are based on simulations that cannot take into account the current stock market depreciation. Therefore, both lost revenue estimates and value of tax cuts to eligible tax filers may be overstated for the current year.

[5]Tax Policy Advisers (TPA) model is an overlapping generations dynamic computable general equilibrium model. The methodologies, assumptions, conclusions, and opinions in this paper are entirely the work of CDA analysts. They have not been endorsed by and do not necessarily reflect the views of the owners of the TPA model. The TPA model is used by leading government agencies to provide indications to policymakers of the probable effects of economic events and public policy changes.

[6]These numbers are meant to qualitatively show the growth effects of the policy under reasonable parameterization of the model. In order to obtain true quantitative results more simulations would need to be conducted with varying parameters in order to estimate the most likely numerical results.

[7]For a description of the methodologies used in this WebMemo, please see http://www.heritage.org/Research/Economy/upload/wm2263_methodologies.pdf.