Some legislators who might otherwise be inclined to support such legislation may question whether President Barack Obama would use the authority responsibly. According to Andrew Kloster and Elizabeth Slattery in The Heritage Foundation’s Edwin Meese III Center for Legal and Judicial Studies, “Abusive, unlawful, and even potentially unconstitutional unilateral action has been a hallmark of the Obama Administration.”[1] Based on this track record, some Members of Congress may balk at giving the President new authority to do much of anything.

A better idea would be for Congress to exercise its constitutional prerogative to mandate negotiating objectives that U.S. negotiators must follow in order for future trade agreements to be considered on a straight up-or-down vote.

A Congressional Mandate vs. a Delegation of Authority

Instead of trade promotion authority, which implies broad discretionary authority and a delegation of power to the executive branch, Congress should issue a trade expansion mandate that establishes clearly defined congressional directives for U.S. trade negotiators. Possible elements of this mandate could include:

Issuing a “trade expansion mandate” instead of “trade promotion authority” would remove any doubt that Congress remains in charge of setting U.S. trade priorities and deciding whether agreements negotiated by the U.S. Trade Representative meet those priorities.

Some of the other issues Congress should consider when designing Trade Expansion Mandate legislation are:

Trade Freedom vs. Global Regulations. Because Congress would be providing a trade expansion mandate, not an environmental regulation mandate or an international labor mandate, legislators should follow the 1995 advice of former House Ways and Means Committee Chairman Bill Archer (R–TX): “There will be no inclusion of authority [in trade agreements] to monkey around with labor standards and environmental standards around the world.”[2]

Trade expert Philip Levy called labor and environmental guidelines developed in 2009 “ill-advised.… Rather than laying the groundwork for future liberalization—the great promise of FTAs [free trade agreements]—this moves the United States away from international sentiment about the appropriate scope of trade agreements.”[3] Worse, these guidelines have fed popular misconceptions that trade is bad for jobs and the environment. The reality is that free trade boosts economic growth, reduces poverty, and generates a cleaner environment.

Data in the Index of Economic Freedom, an annual guide published by The Wall Street Journal and The Heritage Foundation, consistently show that countries with low trade barriers are more prosperous and have cleaner environments than countries that restrict trade. There is no justification for including labor or environmental regulations in a trade agreement. 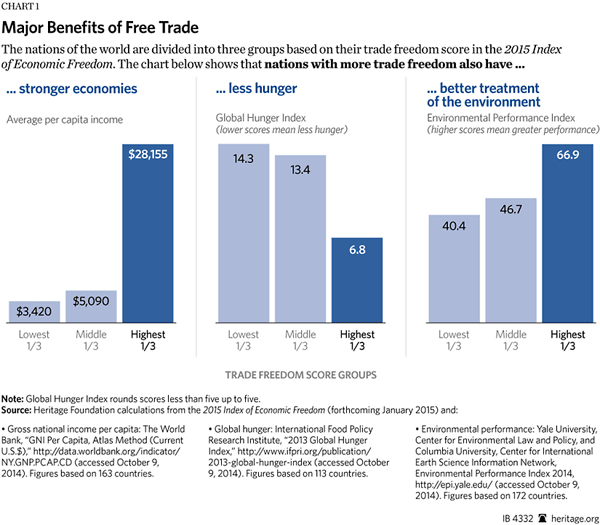 In 2013, the University of Chicago’s Initiative on Global Markets asked its Economics Experts Panel to consider the following proposition: “Refusing to liberalize trade unless partner countries adopt new labor or environmental rules is a bad policy, because even if the new standards would reduce distortions on some dimensions, such a policy involves threatening to maintain large distortions in the form of restricted trade.” Fewer than one in five of the experts surveyed disagreed.[4]

Mutual Recognition vs. Harmonization. Previous U.S. negotiating objectives for regulatory aspects of trade agreements called for “regulatory compatibility through harmonization, equivalence, or mutual recognition of different regulations and standards and to encourage the use of international and interoperable standards, as appropriate.” That is problematic. As Heritage has previously observed, “Harmonization is likely to be driven in practice by international commissions and to harmonize up to higher levels of regulation.”[5] That could drive up the cost of doing business in the United States. According to Heritage Foundation legal analyst Alden Abbott, “Mutual recognition allows standard setting bodies to compete and reduces trade barriers. Over time, this leads to experimentation and more cost-beneficial standards.”

Straightforward Implementing Legislation. Another element of a trade expansion mandate that emphasizes the role of Congress would be to carefully define what can be included in legislation needed to implement future trade agreements.

In 1997, Heritage Foundation analysts criticized language describing the measures that could be included in legislation implementing trade agreements as giving the President too much room to insert extraneous provisions. Heritage recommended implementing legislation limited to “provisions directly related to the principal trade negotiating objectives and necessary for the operation or implementation of the trade agreements.”[6]

The 2014 Trade Priorities Act moved in this direction by only permitting changes in law “as are strictly necessary or appropriate to implement such trade agreement or agreements.”[7] Striking the phrase “or appropriate” would provide additional assurance that implementing legislation could not be hijacked to enact other laws.

Promoting Transparency. A trade expansion mandate should also require the Administration to make trade agreements public once they are concluded, with plenty of time for Congress and the public to review them.

Completed trade agreements should be fully vetted before they are voted on, in contrast to laws like the Affordable Care Act, where “we have to pass the bill so that you can find out what is in it, away from the fog of the controversy”;[8] the 2007 Troubled Asset Relief Program (TARP) bailout, which was introduced on a Monday and signed into law the following Friday;[9] or the recent “Cromnibus” spending bill, which critics said was rammed through without time for adequate debate.[10]

Congress should mandate clear negotiating objectives that direct U.S. negotiators to focus on removing barriers to international commerce, and should also give the public ample time to review completed trade deals before they are subjected to an up-or-down vote. This trade expansion mandate would fuel freedom and economic growth in the United States and across the globe.

—Bryan Riley is Jay Van Andel Senior Analyst in Trade Policy in the Center for Trade and Economics, of the Institute for Economic Freedom and Opportunity, at The Heritage Foundation.

The West Should Welcome the Middle Corridor