Senator John McCain (R–AZ) recently introduced an amendment to repeal harmful aspects of the Jones Act, a 1920 law that restricts the use of foreign-built or foreign-owned ships for transporting goods within the United States.

According to the U.S. Department of Homeland Security, “The coastwise laws [like the Jones Act] are highly protectionist provisions that are intended to create a ‘coastwise monopoly’ in order to protect and develop the American merchant marine, shipbuilding, etc.”

But protecting U.S. industries from competition may actually have the opposite effect. 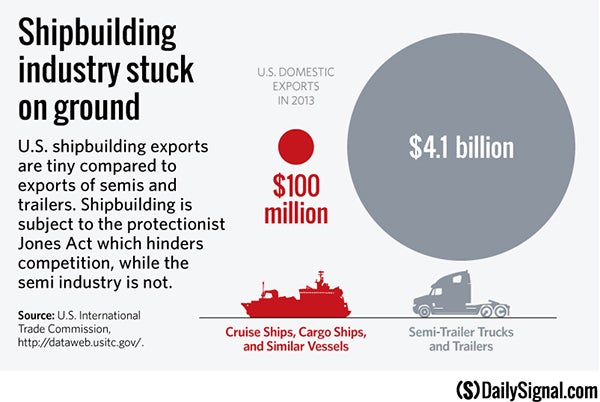 Consider U.S. production of vessels designed to transport goods via water compared to U.S. production of semi-trailer trucks and trailers designed to transport goods via land. In 2013, U.S. manufacturers exported $4.1 billion in semi-trailer trucks and trailers, but they exported just $0.1 billion in commercial ships.

U.S. commercial shipbuilding accounts for just 21.7 percent of total shipbuilding. Most of the industry produces vessels for the military and will continue to do so with or without the Jones Act. The notion that U.S. defense needs require a ban on the use of foreign-built ships for commercial purposes (but not foreign-built aircraft or foreign-built cars and trucks) seems bizarre. In fact, by artificially inflating prices, protectionist measures such as the Jones Act may have given foreign competitors a competitive edge in international shipping.

The Persian Gulf conflict in the early 1990s proved that the Jones Act was not a necessary element in supplying and sustaining a military operation. For example, during the Persian Gulf War, Military Sealift Command shipped millions of tons of cargo to the operation. Of the 191 chartered dry cargo ships involved in this operation, 162 (or 85 percent) were foreign-flagged.

Additionally, the U.S. Department of Defense (DOD) has frequently leased foreign vessels to execute missions that required additional sealift capacity. This further obviates the need for the Jones Act. One could argue that such long-term leasing agreements are not cost-effective, but if that is the case then the military should purchase such vessels outright. The Jones Act doesn’t solve this issue.

Americans in most states would benefit from the freedom to ship goods on the best-built, most affordable vessels, wherever they are made. The Alaska governor is actually required to “use best efforts and all appropriate means to persuade the United States Congress to repeal those provisions of the Jones Act formerly codified at 46 U.S.C. 861, et seq.”