The Tax Code as a Barrier to Entrepreneurship

The Tax Code as a Barrier to Entrepreneurship

Testimony before The Committee on Small Business, United States House of Representatives, February 15, 2017

My name is David R. Burton. I am Senior Fellow in Economic Policy at The Heritage Foundation. I would like to express my thanks to Chairman Chabot, Ranking Member Velázquez, and members of the committee for the opportunity to be here this morning. The views I express in this testimony are my own, and should not be construed as representing any official position of The Heritage Foundation.

Entrepreneurship is in decline. The rate of new business formation has seriously declined and barely exceeds business exits. Many other indicia of entrepreneurial health also indicate that the United States has placed an unprecedented burden on small and start-up businesses. Accordingly, job creation, productivity improvements and welfare-enhancing innovation have slowed.

Although there are many reasons that entrepreneurs are struggling, the tax system is a major contributing factor. This is both because of the direct impact of the tax system on small and start-up firms and because of its adverse impact on the economy overall. The current tax system reduces the incentives to work, save and invest. It raises the cost of capital and reduces access to capital. It imposes high taxes on risk taking, harms the international competitiveness of U.S. businesses and impedes economic growth. Moreover, the tax system is monstrously complex, imposing inordinately high compliance costs on small and start-up firms.

Entrepreneurship matters.1 It fosters discovery and innovation.2 Entrepreneurs also engage in the creative destruction of existing technologies, economic institutions and business production or management techniques by replacing them with new and better ones.3 Entrepreneurs bear a high degree of uncertainty and are the source of much of the

dynamism in our economy.4 New, start-up businesses account for most of the net job creation in the economy.5 Entrepreneurs innovate, providing consumers with new or better products. They provide other businesses with innovative, lower cost production methods and are, therefore, one of the key factors in productivity improvement and real income growth.6 In terms of the neo-classical growth model, entrepreneurship is an important factor affecting the rate of technological change and the marginal productivity of capital.7 The vast majority of economic gains from innovation and entrepreneurship accrue to the public at large, rather than entrepreneurs.8 Entrepreneurs are central to the dynamism, creativity and flexibility that enables market economies to consistently grow, adapt successfully to changing circumstances and create sustained prosperity.9

Entrepreneurship is in Decline 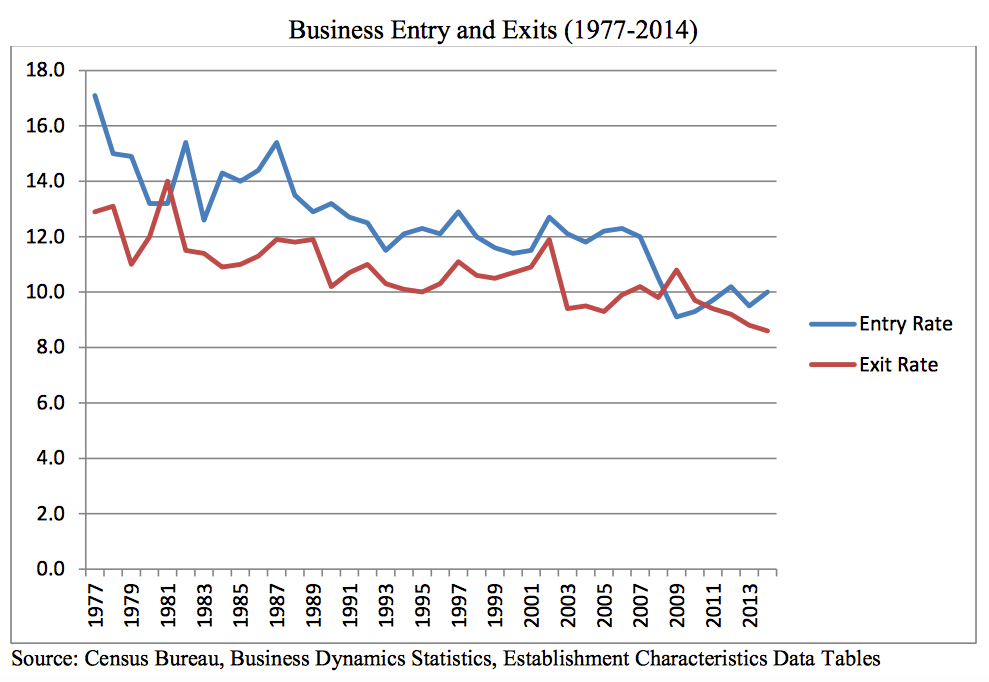 The share of firms aged 16 years or more has increased by 50 percent over the last two decades.11 High-Tech companies are shedding more jobs than they are creating.12 Although recovering with the substantial increase in equity market values over the past several years and the regulatory improvements in the 2012 JOBS Act “IPO On-Ramp” provisions,”13 Initial Public Offerings (IPOS) remain substantially below the previous two decades.14 Although there is improvement since the depths of the recession, small and start-up businesses continue to struggle.15 The decline in entrepreneurship is one of the key factors causing anemic U.S. economic performance.

Helping to Restore Prosperity by Removing Impediments to Entrepreneurship

The remainder of my testimony examines the sources of complexity in the tax code and its economic effects more generally. It then discusses proposed improvements to the tax system. My discussion of proposed reforms is divided into two parts. The first section discusses reforms to the existing tax system that will aid entrepreneurship. The second section addresses more major or fundamental tax reform.

Sources of Complexity in the Tax Code

The compliance costs17 associated with the income tax have been estimated to be in the range of $67 billion to $410 billion.18 The higher estimate, which is quite plausible given its derivation, is 2.2 percent of Gross Domestic Product (GDP) and about 12 percent of federal receipts. These high compliance costs have a disproportionately adverse impact on small and start-up businesses. Compliance costs do not increase linearly with size.

Inventory accounting also introduces a high degree of complexity.24 The Internal Revenue Code section 263A uniform capitalization rules are especially complex. Firms with gross receipts under $10 million annually are allowed to use less complex rules. But for any size firm that maintains inventory, these rules are a major burden.

The taxation of employee benefits is a major source of complexity. The tax treatment of qualified plans is absurdly complex. But the rules governing health insurance, FSAs, HSAs, tuition assistance, life and dental insurance and a host of other matters introduce complexity and costs.

And for firms that operate internationally, the income souring and expense allocation rules, the intercompany pricing rules, the foreign tax credit rules (especially the separate basket limitations), the controlled foreign corporation rules and subpart F, the export sourcing rule and many other provisions introduce a very high degree of complexity.

Primary Impediments to Economic Growth in the Tax Code

The current U.S. tax system has a very substantial negative impact on the economy. It has high marginal tax rates that reduce the incentive to work, save and invest. The U.S., for example, has the highest corporate tax rate in the industrialized world. It substantially raises the cost of capital by double, treble or even quadruple taxing savings and investment. It place U.S. businesses and at competitive disadvantage in international markets. It is riddled with special tax preferences. And it imposes large compliance costs on U.S. businesses, which has a disproportionately negative impact on small firms.

The solution is to reduce marginal tax rates, particularly on businesses, to expense

Incremental improvements to the current tax system that Congress should consider are outlined below.

Under the leadership of House Speaker Paul Ryan (R–WI) and House Ways and Means Committee Chairman Kevin Brady (R–TX), House Republicans released a blueprint for their tax reform initiative in June 2016.37 Since that time, the Ways and Means Committee has been drafting legislation and working toward a consensus among Republicans on the committee. This plan is certainly major tax reform and would have a substantial positive impact on the economy and entrepreneurs.

The Ryan–Brady “Better Way” blueprint would provide the lowest marginal tax rates since the 1920s, and expense machinery, equipment and structures. The top individual tax rate would be 33 percent (compared to 43.4 percent today); the top tax rate on C corporations would be 20 percent (compared to 35 percent today); and the top tax rate on pass-through businesses would be 25 percent (compared to 43.4 percent today). Many other changes would be made. It would have a dramatic positive economic impact. The Tax Foundation estimates it would increase GDP by 9.1 percent over 10 years, and reduce revenues by $191 billion over 10 years.38 The federal government is expected to raise $43 trillion in tax revenue over the next 10 years.39 Thus, the Brady plan is projected to reduce revenues by less than one-half of one percent.

This plan is most succinctly understood as a graduated rate version of the Hall– Rabushka flat tax.40 The two primary differences between the Better Way plan and the traditional Hall–Rabushka flat tax are that the Better Way plan has a border-tax adjustment and, instead of taxing only wages at the individual level, it has an additional tax on dividends, interest, and capital gains at half the statutory rate. It is therefore a very large step toward the right tax base with much lower marginal tax rates than those of the current system.

It would aid small businesses for two reasons. First, it would result in a much stronger economy. Second, it would reduce the burden of the tax system on entrepreneurs. Corporate and pass-through tax rates would decline sharply. All capital and inventory acquisition expenses would be immediately deductible. Capital gains tax rates would fall to 16.5 percent or less, depending on the tax bracket. It would substantially simplify the tax system. Thus, small and start-up firms can expect to see their marginal tax rates decline and their cost of capital decline. They will incur lower compliance costs. And their investors will pay lower marginal tax rates as well.

1 For an introduction to the literature, see Paul Westhead and Mike Wright, Entrepreneurship: A Very Short Introduction (Oxford University Press: 2013).

8 Yale economist William Nordhaus has estimated that 98 percent of the economic gains from innovation and entrepreneurship are received by persons other than the innovator. See William D. Nordhaus, “Schumpeterian Profits in the American Economy: Theory and Measurement,” Cowles Foundation Discussion Paper No. 1457, April 2004 https://cowles.econ.yale.edu/P/cd/d14b/d1457.pdf. Even if he is wrong by a factor of ten, this would still mean that 80 percent of the gains from entrepreneurship go to the public rather than the entrepreneur.

16 For an international survey of regulatory impediments to entrepreneurship and a literature survey, see Doing Business 2014: Understanding Regulations for Small and Medium-Size Enterprises (World Bank: 2013) http://www.doingbusiness.org/~/media/GIAWB/Doing%20Business/Documents/Annual- Reports/English/DB14-Full-Report.pdf ; for a list of regulatory impediments to entrepreneurship in the United States and proposed reforms to address them, see David R. Burton, “Building an Opportunity Economy: The State of Small Business and Entrepreneurship,” Testimony before The Committee on Small Business, United States House of Representatives, March 4, 2015 http://smallbusiness.house.gov/uploadedfiles/3-4-2015_final_burton_tesimony_final.pdf .

17 Compliance costs include legal, accounting and administrative costs but not lost economic output (i.e. the deadweight loss or excess burden of the tax system).

22 26 CFR 1.312-15. Earnings and profits is primarily used to determine if a corporate distribution is a taxable dividend or a return of capital.

34 A withholding rate of 25 percent would reflect the 15.3 percent payroll tax plus an approximately 10 percent average income tax liability.

The Heritage Foundation is the most broadly supported think tank in the United States. During 2014, it had hundreds of thousands of individual, foundation, and corporate supporters representing every state in the U.S. Its 2014 income came from the following sources: