Are We Prepared? Measuring the Impact of Preparedness Grants Since 9/11

Are We Prepared? Measuring the Impact of Preparedness Grants Since 9/11

Testimony before the Subcommittee on Emergency Management, Intergovernmental Relations, and the District of Columbia in the Committee on Homeland Security and Governmental Affairs, United States Senate on June 25, 2013

Thank you for the opportunity to appear before the subcommittee today. In lieu of restating the research I’ve done over the last six and a half years at The Heritage Foundation and in my book Homeland Security and Federalism: Protecting America from Outside the Beltway, I would respectfully direct you to my page on The Heritage Foundation website (www.heritage.org/about/staff/m/matt-mayer) where you can read the various reports I’ve written on the topic of this hearing.

I’d rather spend my brief time with you framing the challenges that remain in preparing America for major events.

First, at the federal level, we’ve squandered time, money, and talent by the continual reinvention of our preparedness doctrine. Whether it is the superficial replacement of Homeland Security Presidential Directive 8 with Presidential Policy Directive 8 or the multiple iterations of the National Preparedness Goal or the rebirth of the original Target Capabilities List as the Core Capabilities, symbolic planning took the place of execution.

As I discovered during and after my time at the U.S. Department of Homeland Security, there is an enormous temptation to reinvent the wheel after leadership changes. This activity occurs when political appointees are replaced, regardless of whether that change occurred within the same administration or across different administrations. Oftentimes, this activity occurs devoid of any substantive deficiency in existing policy.

Next, our measuring sticks are too dependent upon subjective criteria such as “effectiveness” or self-evaluations. One of the key benefits of developing the Target Capabilities List was to determine what capabilities were needed, where we needed those capabilities, at what level we wanted those capabilities to function, and what were the levels of current capabilities in our high-risk locations. This analysis would allow the federal government to put a price tag on preparedness, determine how much of that price tag should be borne by the federal government, and identify the endpoint of federal funding.

After ten years of federal funding, because there has never been a comprehensive, independent audit of state and local assets, we really don’t know what capabilities we’ve actually acquired, at what level those capabilities currently are, and what remains to be acquired. Federal homeland security funding has become another permanent federal program with no endpoint in sight. 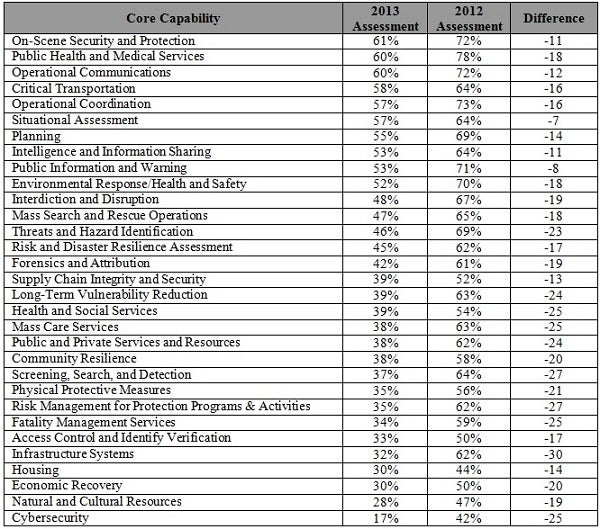 Acknowledging that the core capabilities are not weighted equally in importance, the average preparedness percentage across core capabilities in 2012 was 62 percent. In 2013, it fell to just 43 percent. If it took roughly $40 billion over 11 years to hit that mark, that means it will take another $53 billion to become fully prepared. If Congress appropriates $1.3 billion per year, it will take another 41 years to finally be prepared at an unadjusted price tag of $93 billion.

Those figures are pure fantasy.

Finally, for too many years, Congress has appropriated funds to states and localities under more than 20 different grant programs. From siloed infrastructure programs (such as the Transit Security Grant Program) to those targeting charity organizations, virtually every constituency managed to get a program tailored to its wants. Even worse, those entrenched interests successfully fought off attempts to consolidate programs in a more rational way.

In 2012, the U.S. Department of Homeland Security allocated $1.3 billion under 11 different programs:

Similarly, the methods of allocating funds ranged from nonsensical population-based allocations to complex algorithms using risk-related elements. These allocation variations resulted in funding being sent to places with little to no terrorist risk and then being placed on autopilot, thereby allowing locations to receive funds no matter what their risk or level of preparedness. Meanwhile, America’s high-risk jurisdictions received less funding than they should have.

For example, under the 2012 allocations, the lowest Urban Areas Security Initiative (UASI) allocation of $1.25 million went to both Indianapolis and San Antonio; Denver received $2.5 million; Las Vegas got $1.8 million; Charlotte pulled in $1.5 million; and Portland earned $2.2 million. Yet Wyoming, which has fewer people than all of those cities, received $2.8 million. In fact, over one-third of the 31 high-risk UASI cities received less funding than Wyoming did.

Congress can and should do better with the finite funds it allocates to secure America.

After $40 billion and 11 years, it is time for Congress to narrow the focus of finite federal funds for homeland security grants. By now, most low-risk states, cities, fire departments, infrastructure entities, and other groups have received more than enough federal funds to meet whatever minimal terrorism threat they may face.

The challenges we face in preparing America for the evolving threats we face are to stop reinventing our preparedness doctrine, bring much more rigor and objectivity to how we assess preparedness, and to allocate finite funding more strategically.

Thank you for the opportunity to speak today on this important issue. I look forward to your questions.

Matt Mayer
More on This Issue

Biden’s Open Border Is an Open Invitation to Terrorist Attacks