This Program Stops Terrorists From Entering the U.S. and Should Be Expanded

This Program Stops Terrorists From Entering the U.S. and Should Be Expanded

We may be 16 years removed from 9/11, but make no mistake—terrorists are still trying to enter the United States.

Kirstjen Nielsen, the new secretary of Homeland Security, made it clear as day in a recent speech on her department’s anti-terror efforts:

On an average day, [Homeland Security] encounters seven individuals on the terrorist watch list seeking to enter our country by air, land, or sea. That’s 50 a week; 2,000 a year.

These statistics highlight the sheer number of potential terrorists seeking to enter the U.S., and by extension, they show the importance of providing our security agencies with the best resources and information available. Without good intelligence on criminals and potential terrorists, U.S. security has a difficult time vetting those wishing to enter our country.

But how exactly does this screening process work?

To answer this question, The Heritage Foundation created the graphic below to demonstrate how most visitors to the U.S. are vetted. 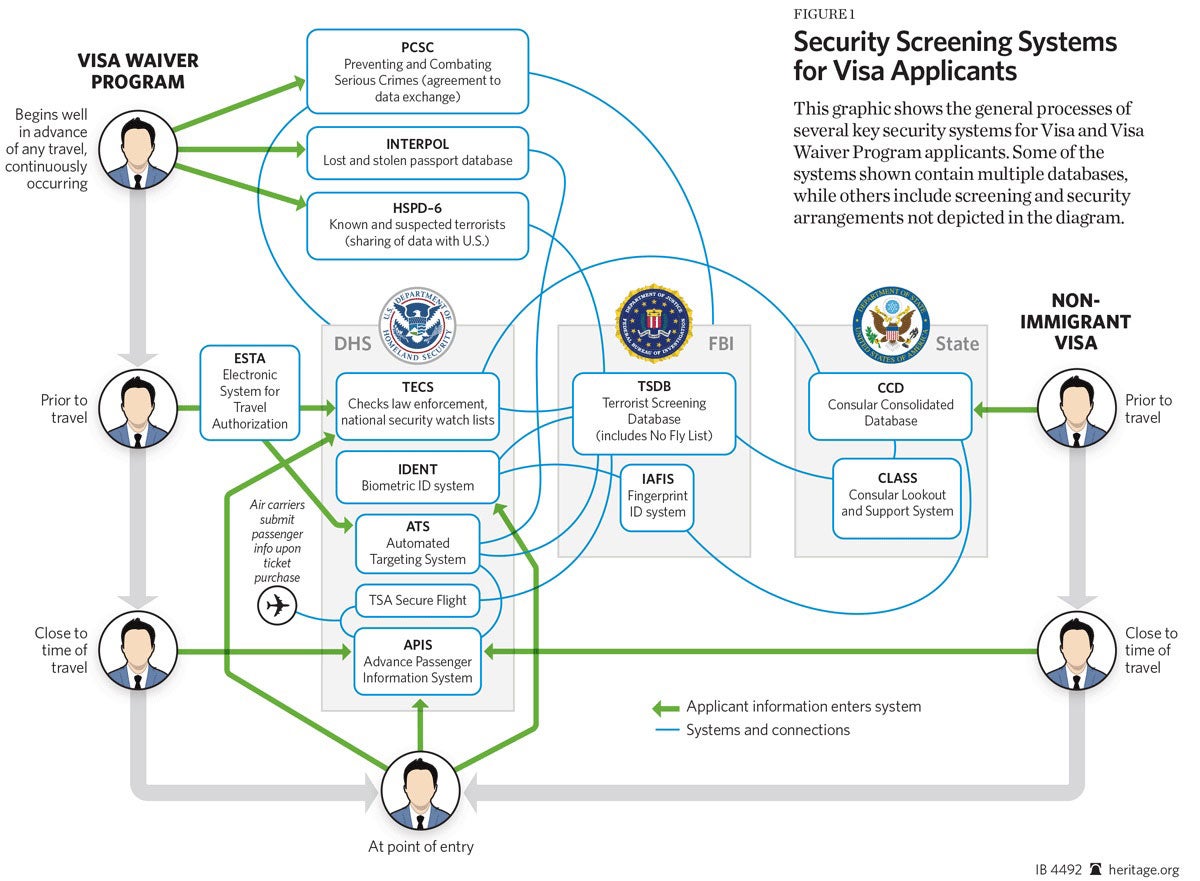 As depicted in the diagram, most visitors to the U.S. enter the country with either a traditional non-immigrant visa or through the visa waiver program.

Perhaps because of the term “waiver” in its name, some assume that the visa waiver program is a less secure process. In reality, people who enter through this program are vetted at essentially the same level as those who visit on a non-immigrant visa.

The graphic shows that, aside from occurring in a different order, both processes vet visitors through various databases housed in the Department of Homeland Security, the FBI, and the State Department.

The information collected through the visa waiver program, combined with other sources of intelligence, enables the U.S. to identify and apprehend terrorists before they enter the homeland.

The Government Accountability Office came to this same conclusion, asserting that “information provided through the [Homeland Security Presidential Directive-6] arrangements has enhanced U.S. traveler-screening capabilities and improved U.S. agencies’ ability to prevent known and suspected terrorists from traveling to the United States.”

The visa waiver program provides the U.S. with valuable information that is needed to prevent foreign terrorists from entering the country. Therefore, judiciously expanding the program to qualifying nations would be a step in favor of greater U.S. security—one that is well worth taking.

Why the Doomsday Clock Is Wrong

Radical Islamists Are Still a Threat Behind Bars