Kara Frederick, a research fellow for technology policy at The Heritage Foundation and a former Facebook employee, recently testified before the House Energy and Commerce’s Subcommittee on Communications and Technology on how to hold Big Tech accountable.

During her testimony, Frederick called Big Tech an “enemy of the people” for its censorship and subsequent gaslighting of the American public.

“I too worked for Facebook. I joined the company after three tours in Afghanistan, because I believed in Facebook’s mission, the democratization of information, but I was wrong,” said Frederick. “Big Tech companies tell us not to believe our lying eyes, that viewpoint censorship is all in our heads.”

Frederick continued: “Tell that to the Gold Star mom who criticized Biden’s Afghanistan withdrawal and was deleted by Facebook after the death of her son, a U.S. Marine. Tell that to Allie Beth Stuckey, who had the temerity to say that biological men should not compete in men’s sports before being suspended by Twitter. Tell that to Clarence Thomas, whose documentary on Amazon was deleted without explanation.” 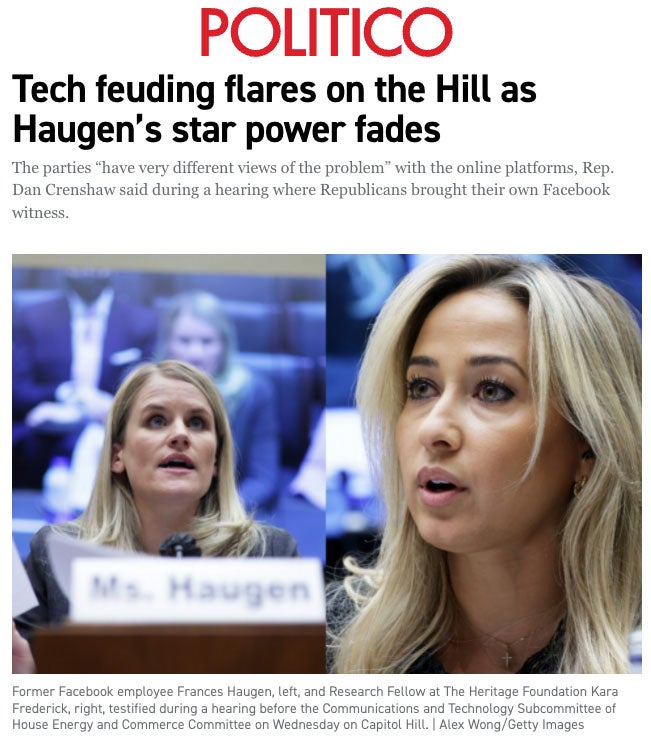 “Frederick, the Republicans’ key witness on Wednesday, offered a stark contrast at times with Haugen, especially on the accusations that Facebook censors conservative viewpoints on topics such as the origins of the Covid pandemic,” reported Politico.

Big Tech has become the censorship arm of the Democratic Party and political left, silencing and de-platforming anyone who rejects the chosen left-wing narrative.

Silicon Valley oligarchs shouldn't be the arbiters of free speech in our country. We must fight back! https://t.co/7x3UZGDlrT

Frederick raised the alarm on the left’s proposed reforms, welcomed by Big Tech, that aim to further suppress viewpoints they don’t like.

“Big Tech companies are not afraid of the American people or meaningful checks on their abuse of power. And it shows. We should be wary of proposals and calls to further suppress content based on politically expedient definitions of ‘misinformation.’ The Wuhan lab leak theory and the Hunter Biden laptop come to mind. Let the whistleblower documents speak for themselves,” said Frederick.

Here are some of Frederick’s recommendations to confront Big Tech’s flagrant abuse of power: