Under federal tax law, individuals may deduct the income and property taxes that they pay to their state and local governments. In recent years, individuals have been allowed to choose between deducting their income tax or sales taxes.[1] Because federal tax deductions effectively spread the costs of these deductions across all taxpayers in the form of higher federal tax rates, the state and local tax deduction forces federal taxpayers in low-tax states to subsidize taxpayers in high-tax states. Distributional impacts within states force low-income residents to subsidize high-income residents.

The State and Local Tax Deduction

The state and local tax deduction has been around since the inception of the federal income tax in 1913. The rationale for it is that since state and local taxes reduce individuals’ after-tax income, the income used to pay those taxes should be excluded from federal taxation. That argument has merit.

In practice, however, the deduction allows states to raise taxes higher than they otherwise would and has significant perverse distributional impacts, redistributing income from the poor to the rich and from people in low-tax states to people in high-tax states. Despite some efforts to eliminate it, the deduction for state and local taxes remains one of the largest deductions in the federal tax code. According to The Heritage Foundation’s Individual Income Tax Model (HFIITM), the state and local tax deduction will reduce federal tax revenues by an estimated $90 billion in 2015. This makes the state and local deduction one of the largest “tax preference” items. 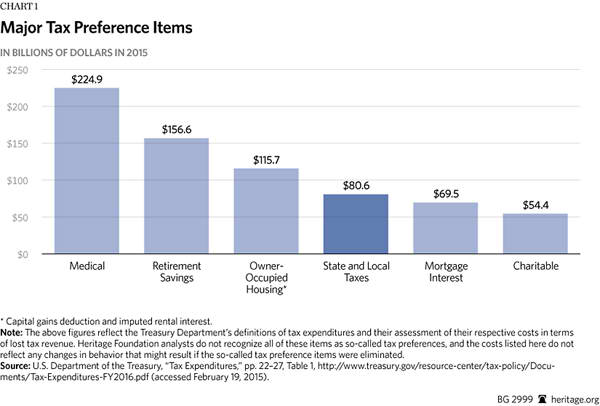 Economics of the Deduction

Any tax deduction reduces the tax base and therefore requires higher marginal tax rates to maintain the same level of tax revenue. Ideally, deductions should be kept to a minimum after the appropriate tax base has been established. Yet the U.S. tax code is littered with numerous deductions and exemptions as political and special interests have interfered with economically efficient taxation. The federal deduction for state and local taxes turns high-tax states into one of those special interests.

The federal deduction for state and local taxes creates both winners and losers.

The state and local tax deduction effectively reduces states’ marginal tax rates, allowing them to collect higher taxes while shifting some of the burden from their own taxpayers to taxpayers in other states. For example, the state of California has a top marginal tax rate of 9 percent, but the state and local tax deduction reduces this to an effective 5.4 percent. This is because the federal government reimburses state taxpayers up to 40 cents of each dollar they pay in state taxes. Thus, while California’s government keeps every dollar of state tax revenue, only part of that revenue comes from California residents. The rest comes from the federal government in the form of reduced federal tax receipts. 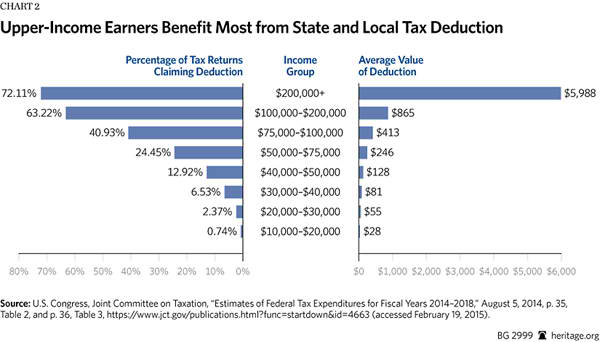 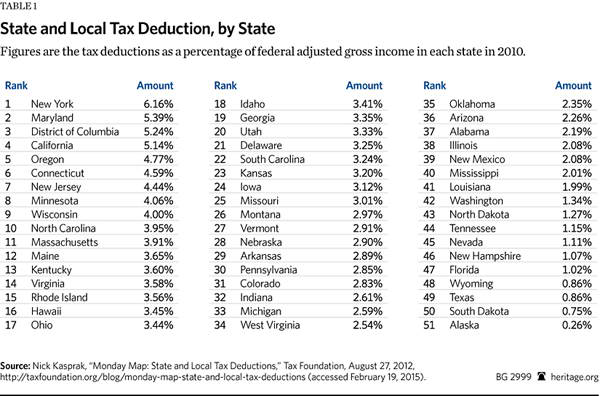 This leaves the federal government with less control over its collection of taxes. For example, the tax increases contained in Illinois’ Taxpayer Accountability and Budget Stabilization Act generated an additional estimated $25.7 billion in tax revenues for the state between 2011 and 2014.[7] But those same tax increases directly reduced federal tax revenues.

The Heritage Foundation’s Center for Data Analysis estimated the static impact on federal tax revenues of eliminating the state and local tax deduction using The Heritage Foundation Individual Income Tax Model (HFIITM). This analysis marks the first use of the new model, which estimates the static impact of changes in federal tax policy on the overall revenues and distribution of federal taxes. Because this is the first analysis published using the model, we have detailed its structure and capabilities in the Appendix.

Replacing the Deduction with Reduced Rates. The purpose of eliminating the state and local tax deduction is not to generate new federal tax revenues, but to rid the tax code of inefficient policies. Thus, Congress should offset the removal of any deductions with a reduction in marginal tax rates. If the revenues from eliminating the state and local tax deduction were used to lower rates to maintain revenue neutrality and distributional neutrality with the current tax code, marginal tax rates would decline by up to 12.5 percent.[11] 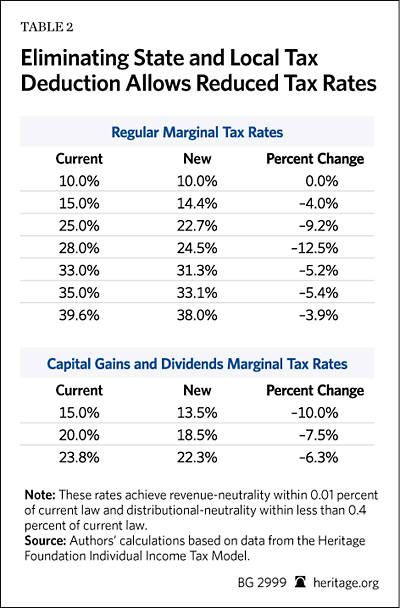 Our analysis found that removing the state and local tax deduction and replacing it with a revenue-neutral and distribution-neutral reduction in marginal tax rates would produce the largest tax reductions for the 25 percent and 28 percent tax brackets, which would decline by 9.2 percent and 12.5 percent, respectively. The 15 percent and upper-income rates would all decline between 3 percent and 5 percent.

The Potential Impact on State Policies

Without the federal government picking up a piece of their state and local tax burden, many taxpayers would face a significantly higher effective state tax burden that could drive some individuals and small businesses out of high-tax states and into lower-tax ones. This competition in state taxation would be good for individuals and businesses because it would make states more accountable for all of the tax revenue they collect.

Increased accountability would lead to more equitable and efficient taxation at both the state and federal level. Absent the deduction, taxes would be distributed more equitably according to services received. When faced with the full cost of services received, taxpayers would likely demand fewer services and a more efficient allocation of their tax dollars, leading to a more optimal overall level of taxation.

The Effect on Individuals

Despite seeming like an increase in federal taxes (or an increase in effective state taxes) for anyone who claims the state and local tax deduction, eliminating the deduction could reduce many of these taxpayers’ federal tax liabilities if coupled with a corresponding reduction in federal marginal tax rates.

The state and local tax deduction has adverse impacts that outweigh its benefits and should be eliminated for that reason. However, Congress should use the additional revenue that would be generated to reduce marginal income tax rates for all federal taxpayers, not simply add it to the federal government’s coffers. If marginal tax rates were reduced in a revenue-neutral and distributionally neutral manner, the more than 70 percent of taxpayers who do not itemize would face lower combined federal and state income tax burdens. Additionally, this could lower overall taxes for some taxpayers who itemize but who have relatively lower incomes or live in lower-tax states.

Assuming an appropriate tax base has been established, most tax deductions and exclusions are not efficient because they require higher marginal tax rates. The state and local tax deduction fits this description because it supports detrimental economic policies: high levels of taxation and inefficient and wasteful government spending. Furthermore, it subjects federal tax revenues to the whim of state governments, while benefiting wealthy taxpayers and high-tax states.

—Rachel Greszler is Senior Policy Analyst and Kevin D. Dayaratna, PhD, is Senior Statistician and Research Programmer in the Center for Data Analysis, of the Institute for Economic Freedom and Opportunity, at The Heritage Foundation.

The Heritage Foundation’s Individual Income Tax Model (HFIITM) is a statistical model for forecasting tax revenues. The model uses data from the 2007 Statistics of Income Public Use Tax File from the Internal Revenue Service.[12] This is a stratified sample of the American population consisting of approximately 143,142 tax filing records. The data blur certain information, such as state of residency, for high-income tax filers (those with adjusted gross incomes over $200,000).

The model and data are based off the IRS’s 2007 F1040 form and includes most variables, or lines, contained in this form. Some lines are excluded from the IRS dataset and therefore cannot be disaggregated within the model.

To establish a base-case scenario, the HFIITM model generates a random sample (a sequence of independent and identically distributed random variables) from the original 2007 dataset and “ages” each observation of this sample over subsequent years through 2025. Specifically, the sample from the original 2007 data is used to generate subsequent observations of data for 2008, and then the 2008 data are used to generate 2009 data, and the process continues.

The aging of the data from 2007 to 2025 includes both targeted aging based on actual data available from the IRS through 2012 and applied growth rates. For nearly all variables, additional aggregate IRS data from 2012 are used to apply a steady growth rate between 2007 and 2012. Beyond 2012, variables are grown according to what are deemed appropriate growth rates. For example, variables related to income are grown according to presumed income growth rates, and education-related and health-related tax components are grown according to their estimated cost growth. The tax parameters for 2015 and beyond are adjusted for inflation and income as determined by current tax law. Aggregate revenues are computed using the law of large numbers, which states that for a sufficiently large sample size, the mean of a random sample converges to the population mean.[13] Although cyclical growth is expected, the HFIITM—like most other microsimulation models—does not attempt to model such cyclical growth. Instead, the HFIITM assumes steady state growth. Because of this assumption of steady state growth, additional aggregate data from 2012 were used to adjust the growth rates of most variables between 2007 and 2012. Without this adjustment, the estimated growth rates create significantly higher values for many of the variables than actually occurred.

For this first simulation using the HFIITM, we ran a baseline scenario based on current policy and juxtaposed this against an alternative scenario that eliminates state and local tax deductions for years 2015 and beyond. The differences between the two scenarios are based on comparing overall revenues after refunds and credits.

[4] The authors’ calculations are based on data from Shadusky, “State and Local Tax Deductions,” and IRS data on the number of tax filers in 2011. The IRS data showed a total of 145,370,240 taxpayers in 2011. The average deduction for the 10 states with the biggest state and local deductions is $4,208 while the average is $2,325 across the bottom 40 states. This calculation averages the deduction across all taxpayers in the state, not just itemizers. Internal Revenue Service, “SOI Tax Stats—Individual Statistical Tables by Filing Status,” 2011, Table 1.2, http://www.irs.gov/uac/SOI-Tax-Stats---Individual-Statistical-Tables-by-Filing-Status  (accessed February 17, 2015).

[11] The authors used estimates from the Joint Committee on Taxation on the distributional impact of the state and local tax deduction as a starting point to determine the appropriate marginal rate tax reductions that would achieve a revenue-neutral and distributionally neutral tax reform. U.S. Congress, Joint Committee on Taxation, “Estimates of Federal Tax Expenditures Fiscal Years 2012–2017,” February 1, 2013, https://www.jct.gov/publications.html?func=startdown&id=4503  (accessed February 17, 2015).The authors then compared the distribution of current tax policy to that with no state and local deduction and lower marginal rates. Through multiple iterations of changes in marginal rates, we achieved a new set of marginal tax rates that is both revenue-neutral and distributionally neutral to current tax law.