How Congress Should Reform Business Taxes

How Congress Should Reform Business Taxes

Regrettably, there is little reason to believe that the White House will be a willing partner in pursuing tax reform. President Barack Obama has never indicated that he wants to fundamentally reform the entire tax code, nor has he shown any willingness to lead such an effort. In practice, presidential leadership has proved vital for successful tax reform.

However, President Obama has said that he would like to reform only the corporate side of the tax code. In fact, he quietly released a framework for such a plan in 2012.[2] Since then he has done little to push the plan through Congress, except to include it in his past two budgets. The details of the framework are problematic,[3] but it at least shows that the President is willing to consider the issue.

Chairmen Ryan and Hatch as well as other leaders in Congress have expressed willingness to reform the business side of the tax code as a first step to full tax reform. However, before Congress undertakes this difficult endeavor, Members of Congress need to have the proper goal in mind of what the completed plan should look like.

The Necessity of Business Tax Reform

Before reforming business taxes, it is useful to understand why reform of the current system is necessary. Traditionally, the impetus for tax reform has originated from concerns about the individual side of the code. Today, the most important purpose of tax reform is to reform the antiquated business tax system because it is a major impediment to achieving prosperity, economic growth, and higher real wages.

Pass-through entities, usually smaller firms, are subject to tax rates as high as 43.4 percent just at the federal level, although they are not subject to tax at the entity level. In 2011, pass-through entities employed more than 50 percent of the private-sector workforce and earned 64 percent of all business income.[6] According to IRS data, there were 3.2 million partnerships, 4.2 million S corporations, and 1.6 million C corporations in 2011.[7]

Worldwide Tax System. In addition to high rates, the U.S. is effectively the only major developed country that uses a worldwide tax system to tax its businesses on the income earned abroad. Most other countries use a territorial system that taxes businesses on only the income that they earn within the country’s borders. The other six OECD countries that use a worldwide system are Chile, Greece, Ireland, Israel, South Korea, and Mexico. Yet each of these six countries has a top corporate income tax rate that is lower than the U.S. rate, making their worldwide systems less economically damaging than the U.S. worldwide regime.[8]

The worldwide system in the U.S. coupled with the high tax rate means that U.S. businesses pay an extra tax on income that they earn abroad. This extra tax reduces the foreign investment that they are willing to make. This reduces jobs and wages for U.S. workers both because U.S.-owned foreign corporations are more likely to buy from the U.S. and because U.S.-headquartered companies create jobs in the U.S. when they have successful foreign operations.[9]

In the mid-1980s, the U.S. business tax system was in line with international norms. The rate was competitive, and other countries taxed their businesses on a worldwide basis. However, in the roughly 30 years since, other developed countries have aggressively cut their rates and moved to territorial systems because of the tremendous benefits that these policies create for their economies.[10] By standing still during those years, the U.S. has fallen behind. It now has an anachronistic business tax system that is ill suited for the modern global economy.

Cumbersome Depreciation System. The cumbersome depreciation system for capital investments in the U.S. tax code adds to the uncompetitive business environment. The U.S. capital cost recovery system is much worse than the OECD average.[11]

When accounting for the capital expenses for tax purposes, businesses should be able to deduct the full cost of assets at the time they purchase them. This is known as expensing. Anything short of expensing, such as current depreciation rules, raises the cost of capital and creates a bias against investment by forcing businesses to delay deducting their capital expenses,[12] sometimes for as long as 39 years.[13] This creates cash-flow problems and, because of the time value of money, makes investments in plants, machinery, equipment, and structures more costly. Higher capital costs reduce investment, therefore reducing the productivity of American workers, slowing economic growth, and harming the competitiveness of U.S. businesses. Furthermore, the artificial depreciation timelines created by Congress can tilt the market in favor of some forms of capital and against others, leading to a less efficient allocation of capital and a smaller economy.

Assuming a tax on businesses is necessary, the best business tax system that Congress could establish is a cash-flow tax, also known as an inflow-outflow tax.

A cash-flow tax starts with a business’s gross receipts and allows deductions for all business expenses, including the cost of labor, inputs, and capital investment when the business incurs the expenses. If properly structured, such a tax would eliminate the double taxation of business income. A flat tax rate applies to the remaining income, preferably one that would be competitive with other developed nations.[14]

The Heritage Foundation’s New Flat Tax would establish a cash-flow tax.[15] A cash-flow-type tax can also deny a deduction for labor costs to allow for a significantly lower rate, therefore taxing labor and capital factor incomes equally at the business level rather than just taxing capital income at the business level. This variation is known as a business-transfer tax.[16]

Transitioning to such a system would take time given the political and practical difficulties. Therefore, this paper establishes a three-phase pathway to reforming the business tax code that would go a long way toward simplifying the current system, improving its fairness, and promoting job growth and economic prosperity in America.

The business tax system inhibits economic growth, job creation, and wage increases because it levies the highest corporate tax in the world, denies full expensing for business investment, and taxes the foreign earnings of U.S. businesses. Congress should first seek to ameliorate the pain caused by these problems with immediately achievable policies.

Once Congress makes the changes in Phase 1, it should repair parts of the business tax system that have long needed shoring up. These policies will not have as much positive impact on economic growth as those in Phase 1, but they are important aspects of the current system that hurt economic growth and that Congress has left unaddressed for too long. 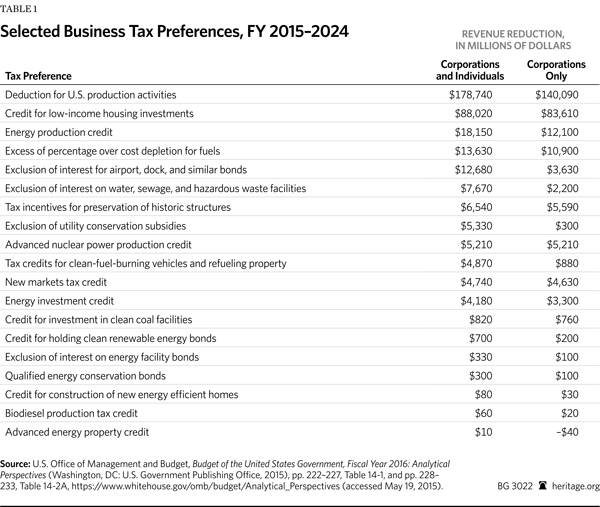 Phase 3: Finishing the Job with a Complete Cash-Flow Tax

In the final phase of business reform, Congress should finish the job by fully instituting a cash-flow system for all businesses. The policies laid out below assume Congress has already applied the same rate to C corporations and pass-through businesses.

Once Congress takes these three important steps, combined with improvements in earlier phases, it will have established a cash-flow tax and modernized the business tax system so that it is once again competitive with other developed countries. The American people will greatly benefit when Congress fully implements these changes because economic growth, job creation, and wages will grow sharply.

The U.S. economy badly needs business tax reform. The U.S. has the least competitive business tax system in the industrialized world, and this is holding back the economy, productivity improvement, and the wages of the American people. Congress and President Obama should seek to fix this by instituting business tax reform in three phases.

In Phase 1, Congress should take a first step toward a cash-flow system by:

In Phase 2, Congress should:

In Phase 3, Congress should finish moving the business tax system to a cash-flow tax by:

These long overdue policy improvements will likely reduce tax revenue even if Congress eliminates business tax preferences. Yet the archaic business tax system is such a drag on the economy that the tax cut would be a small price to pay for the benefits that the American people would enjoy.

[2] The White House and U.S. Department of the Treasury, “The President’s Framework for Business Tax Reform,” February 2012, http://www.treasury.gov/resource-center/tax-policy/Documents/The-Presidents-Framework-for-Business-Tax-Reform-02-22-2012.pdf  (accessed March 23, 2015).

[14] The simple version of this cash-flow tax would disregard financial flows, including making interest income nontaxable and not providing a deduction for interest expenses.

[17] However, dividends from C corporations are subject to a second layer of tax when paid to shareholders. Retained earnings are not subject to this second level of tax unless distributed, and the deferral may be indefinite. Retained earnings will, however, presumably be reflected in the value of the corporation’s stock, and if sold by the shareholder, this higher value would result in a higher capital gains tax.

[18] This can be accomplished by exempting dividends and distributions or by giving individuals a credit on their individual tax returns for the entity-level tax paid. The later approach is often called an integrated tax system.

[19] For example, the recently proposed Lee–Rubio plan adopts both approaches. It taxes C corporations at the entity level, but exempts dividends and capital gains on corporate stock from additional taxation at the individual level and does not tax pass-through entities at the entity level. It instead taxes this business income at the individual level. See Curtis S. Dubay and David R. Burton, “The Lee–Rubio Tax Plan’s Business Reforms Are Tremendously Pro-Growth,” Heritage Foundation Backgrounder No. 3000, March 9, 2015, http://www.heritage.org/research/reports/2015/03/the-leerubio-tax-plans-business-reforms-are-tremendously-pro-growth.

[22] Tax expenditures do not necessarily sum due to interaction of the various provisions. The sum of the tax preferences in Table 1 is $352 billion. A significant portion of the listed provisions are used by non-corporate businesses. The sum of the corporate tax preferences is $273.6 billion. The corporate tax is expected to raise $4,844 billion over fiscal year (FY) 2015–FY 2024 ($342 billion in FY 2015 rising to $519 billion in FY 2024). Repealing true tax preferences would fund approximately 5.6 percent of revenue ($273.6 billion of $4,844 billion), and 5.6 percent of the 35 percent corporate rate is only 2 percentage points. The list includes the deduction for Domestic Production Activities. This policy is effectively a marginal tax rate reduction for most businesses. Tax reform can eliminate it as long as it reduces business rates more than the deduction does.

[35] Generally, income earned by foreign corporations is not taxed unless it is Subpart F income or taxed due to the Passive Foreign Investment Company or Foreign Personal Holding Company rules. The income of foreign branches of U.S. businesses is also taxed when it is earned.