How Congress Can Improve Government Programs and Save Taxpayer Dollars

How Congress Can Improve Government Programs and Save Taxpayer Dollars

The current budget process provides Congress with few incentives for eliminating programs that do not work and waste taxpayer resources. Moreover, the federal government suffers from duplicative and overlapping programs, which would benefit from consolidation to better achieve their objectives at lower cost to taxpayers. The Defense Department’s Base Closure and Realignment Commission (BRAC) provides important lessons on how Congress can overcome gridlock and special interest politics to better prioritize scarce resources through the work of a designated commission. A well-designed waste commission could overcome the budget process’s tendency toward wasteful spending on failed and duplicative programs, and encourage lawmakers to eliminate and consolidate federal operations where appropriate.

Each year since 2011, the Government Accountability Office (GAO), the independent government agency that studies how federal dollars are spent, has prepared for Congress and the Administration a vast list of programs and areas in which Congress could take action to reduce fragmentation, overlap, and duplication, and achieve other financial benefits. Moreover, the GAO follows and makes public congressional and administrative actions on its Action Tracker.[1]

The GAO’s 2014 annual report[2] presents Congress and the Administration with a dismal record, in which only 19 percent of areas identified for consolidation and to achieve other savings were fully addressed over the past three years, and 15 percent were fully ignored. Regarding actions taken within those areas, the record improves only slightly with 32 percent of GAO-identified actions having been fully addressed and 19 percent neglected.[3]

Following are just three of many examples of actions that the GAO recommended that Congress take immediately: 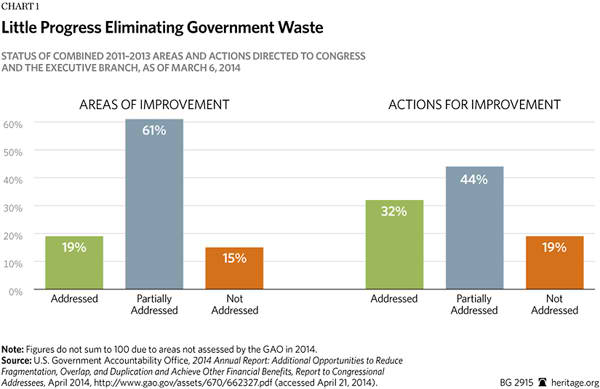 According to Senator Tom Coburn (R–OK), whose leadership established the annual GAO report for Congress as part of an amendment to the 2010 debt-limit-increase bill, “Over the past four years, GAO’s duplication reports have identified a mother lode of potential savings—at least $200 billion annually. Sadly, Congress has done very little digging. We’ve achieved a small fraction of the savings GAO has revealed.”[7]

Indeed, Congress has even fallen behind executive agencies when it comes to addressing the GAO’s areas of concern. Congress neglected nearly half of all of the actions that the GAO recommended, and addressed only 27 percent. The executive branch neglected 13 percent and addressed 33 percent of all actions.

Ignoring their responsibility to conduct oversight and determine if a given federal program is effective, members of Congress are often beholden to special interest groups and would rather continue funding an old program instead of eliminating it. At the same time, Congress will then create new programs that do the very same thing and do it just as poorly. There’s no ineffective, inefficient program that the government can’t recreate at an even higher cost.[8] 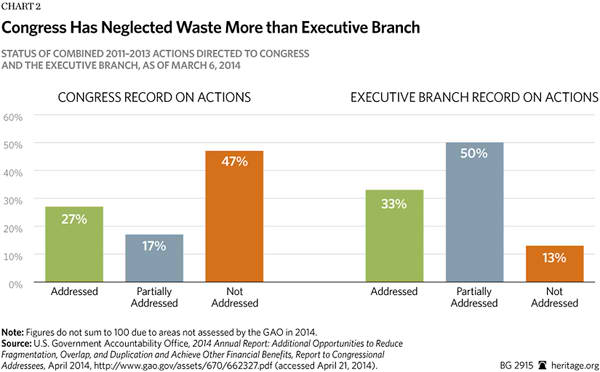 Congress is indeed beholden to special interest groups, a reality that is unlikely to change. A federal government program, for instance, that costs $135 million annually might give taxpayer dollars to 10 private companies for certain investments. Divided equally among the 10 beneficiary companies, each company receiving $13.5 million in government support will care a great deal about this program. The beneficiaries will send lobbyists to Washington, making sure that Congress understands how important this program is to them. Moreover, they will work to convince Congress that this program is not only in the companies’ private interest, but serves a grander national purpose.

Taxpayers on the other hand, have much less of an incentive to defend themselves from such a wasteful and unjust program. Divided by the number of federal income taxpayers in the U.S., this program’s cost would be less than $1 for every taxpayer.[9] The incentives, then, are aligned in such a way that the concentrated private interest will dominate over the largely dispersed public interest in terms of the effort that each group will put in to achieve their goals. A program cost of less than $1 per taxpayer might not sound harmful—until considering that thousands of such programs exist that are, indeed, “nickel and diming” the American public ever deeper into debt.[10]

An example that fits the description of a program that receives funding because of concentrated benefits and dispersed costs is the Department of Energy’s Advanced Manufacturing Program.[11] The program subsidizes American manufacturers for the purpose of helping them achieve greater energy efficiency. Manufacturers are well aware that energy represents a significant input cost, and face sufficient incentives to find ways to lower costs and gain a competitive advantage. Taxpayers do not need to chip in to help profitable companies make sensible energy efficiency upgrades that benefit the company’s bottom line. The program, at a cost of $120 million in 2013, benefits participating manufacturers greatly. Taxpayers face a cost of less than $1 each for the program, providing them with little incentive to learn about the program and effectively oppose it. As Heritage Foundation chief economist Stephen Moore explains it:

Imagine for a moment that you are sitting on your couch watching TV and there is a knock on the door. There in a corporate suit is an employee of General Dynamics with a tin cup and he asks if you would contribute a dollar for a research project. You would slam the door in his face. But somehow when the government collects a dollar from each of us and gives the money to General Dynamics, this is considered in Washington a wise “investment.”[12]

Members of Congress collaborate when it comes to funding their pet projects. Lawmakers will exchange favors by granting political support and votes for each other’s projects. This practice is known as “logrolling.” Each year, Congress is confronted with the decision of which federal programs to fund, and by how much. Even if a program has no beneficiaries in a particular lawmaker’s district, the lawmaker may agree to fund it with the expectation that his fellow lawmaker will return the favor when it comes to his own pet project.

The practice of earmarking—directing funds to specific projects—was one of the most visible forms of logrolling before Congress adopted a rule banning earmarks in 2010. Earmarks contributed to spending on often-inappropriate (beyond the scope of government) and wasteful federal programs. At their peak in fiscal year (FY) 2006, more than 15,800 earmarks were included in appropriations bills, accounting for almost $72 billion in federal spending.[13] Even after transparency measures reduced the prevalence of earmarks in FY 2007, FY 2010 appropriations bills still allocated $32 billion in 11,320 earmarks, according to data compiled by the Congressional Research Service.[14] The Cato Institute’s Ted DeHaven describes earmarks as “greas[ing] the skids for bigger spending and more intrusive government. Policymakers are more willing to support a particular piece of legislation if it contains goodies for their district or state.”[15]

Earmarks have a damaging effect on the budget process beyond their dollar cost. In the transportation area, earmarks are often carved out of each state’s formula allocation so that a dollar devoted to an earmark means that this dollar is no longer available to the state’s own priority projects. By bypassing competitive bidding processes, moreover, earmarks often allocate funding to lower-quality and higher-cost projects at a loss to the public.[16]

Yet even with the earmark ban in place, lawmakers continue to allocate funding to wasteful, failed, and inappropriate federal programs. Broader reforms are necessary to improve government programs and save taxpayer money.

After the Cold War, Congress showed bipartisan interest in closing obsolete military bases around the world in order to re-prioritize military activities, freeing up money to fund other missions or to reduce the deficit. Yet, base closures resulted in the dynamics of concentrated benefits and dispersed costs. Districts in which bases were closed experienced the immediate pain of that decision while the benefits were shared among all taxpayers. It became increasingly difficult to carry out base closures as Members of Congress banded together to protect each other’s districts from base closures. This was the case despite the fact that many communities recovered quickly as they turned closed military facilities into engines of private-sector job creation, often creating even more private-sector jobs than civilian jobs that were lost due to the closure.[17] A commission to close and realign defense bases broke through the gridlock.

In 1988, the Base Closure and Realignment Act[18] established a process for closing or realigning military bases through the Base Closure and Realignment Commission (BRAC). The process began with the Department of Defense examining its forces and installations to compile a list of recommended BRAC actions. The independent BRAC reviewed the list and submitted it to the President with any recommended changes. The President then either approved or rejected the commission’s recommendations and submitted the list to Congress for review. If the President approved BRAC’s recommendations, but Congress disagreed, Congress could pass a resolution to reject BRAC’s plan as a whole, at the risk of a presidential veto. If Congress took no action, the BRAC changes became law.[19] Although the 2005 BRAC process suffered from several shortcomings and inaccuracies,[20] overall it has been successful. Thus, the idea that an independent commission guided by clear criteria can overcome special interest politics and congressional gridlock in pursuit of the national interest deserves serious consideration.

The Mercatus Center’s Jerry Brito identified these lessons for a Government Waste Commission based on BRAC: “A spending commission modeled on BRAC should be focused, independent, composed of disinterested citizens given clear criteria for their decisions, and be structured in a way that allows its recommendations to be operative unless Congress rejects them.”[21]

Components of a Successful Waste Commission

A Government Waste Commission, modeled after the successful BRAC, could improve government programs and save taxpayers money. Such a commission would review the entire federal government to select programs for elimination and consolidation. The commission should be based on four components to improve its prospects of success:[22]

[3] Partially addressed, in the case of agency actions, means that at least one action needed in that area showed some progress toward implementation. As it pertains to congressional actions, partially addressed means that a bill passed a relevant committee, the House, or the Senate, or a bill became law that addressed the area only partially.

[21] Jerry Brito, “Running for Cover: The BRAC Commission as a Model for Federal Spending Reform,” The Georgetown Journal of Law & Public Policy, Vol. 9, No. 1 (Winter 2011), http://mercatus.org/sites/default/files/BRAC-commission-model-for-federal-spending-reform.jpg (accessed May 20, 2014).

[22] These components are based on suggestions by Michelle Muccio and Brian M. Riedl, “Four Elements of a Successful Government Waste Commission,” Heritage Foundation WebMemo No. 1147, July 10, 2006, http://www.heritage.org/research/reports/2006/07/four-elements-of-a-successful-government-waste-commission.

[23] The Pentagon has asked Congress repeatedly for another round of BRAC; see Dodge, “Beyond BRAC.” Certain defense programs have also been identified as beyond the scope of government or only loosely related to the U.S. national defense strategy, and wasteful, and Congress might consider a separate waste commission to refocus defense resources on mission-critical programs and projects. See Mackenzie Eaglen and Julia Pollak, “How to Save Money, Reform Processes, and Increase Efficiency in the Defense Department,” Heritage Foundation Backgrounder No. 2507, January 10, 2011, http://www.heritage.org/research/reports/2011/01/how-to-save-money-reform-processes-and-increase-efficiency-in-the-defense-department.