Congress Should Not Give Puerto Rico Federal Tax Subsidies

Congress Should Not Give Puerto Rico Federal Tax Subsidies

Policymakers are considering extending federal tax credits such as the Earned Income Tax Credit (EITC) and Child Tax Credit (CTC)—but not the rest of the federal tax code—to Puerto Rico as a way to help the island emerge from its economic and fiscal crisis. This would amount to an expensive cash bailout and would not address the core problems that caused Puerto Rico’s crisis.

The EITC would primarily boost the incomes of Puerto Rico’s middle class without helping those who are unemployed, working in the underground economy, or living on welfare benefits. The CTC would shift income toward families without spurring economic growth. Given the highly problematic and costly improper payment rates of the EITC and CTC among federal taxpayers, extending them to non-federal taxpayers would likely result in even higher rates of fraudulent payments.

Because they live in a U.S. territory, Puerto Rican residents are not subject to U.S. federal income taxes. While they and their employers pay Social Security and Medicare payroll taxes, those are filed by employers. Most Puerto Ricans have no interaction with the Internal Revenue Service (IRS). A 2014 study by the Government Accountability Office (GAO) estimated that if Puerto Rico were a state and subject to the federal income tax, its residents would have paid an estimated $2.2 billion to $2.3 billion in federal individual income taxes in 2010 (after netting out refundable tax credits such as the EITC and CTC) and as much as $3.4 billion more in federal corporate income taxes.[1]

Federal tax benefits should be reserved for those who are subject to the federal income tax. Temporary access to the EITC and CTC for Puerto Rico and other territories would quickly transform into permanent access to those benefits and a whole host of other federal tax credits. 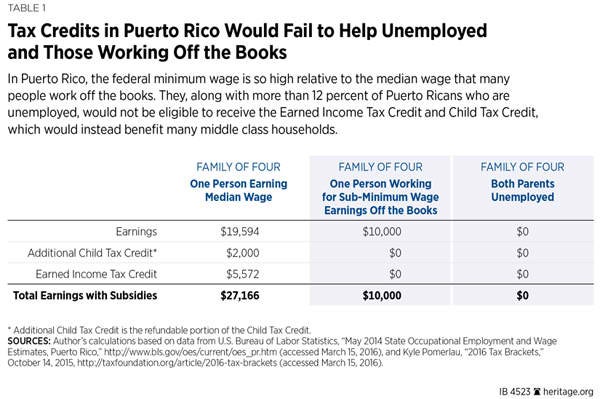 Puerto Rico has the authority to implement its own wage subsidy, which it did, temporarily, from 2007–2013 through a “work credit.” Puerto Rico’s version of the EITC was smaller, with a maximum work credit of $450. The credit was initially available to families making up to $20,000 per year, and that limit increased over time to $27,500 in 2013. About 45 percent of Puerto Rico’s tax filers claimed the credit, costing the Puerto Rican government about $124 million per year.[3] The Puerto Rican government eliminated its work credit as a cost-savings measure in 2014.

Only about 38 percent of Puerto Rico’s working-age population (ages 15–64) has a job in the formal economy,[4] and just over 12 percent of Puerto Ricans are unemployed. That leaves half of Puerto Rico’s working-age population not looking for jobs. Some of these individuals are students and homemakers, but most are either on the sidelines collecting federal welfare benefits, or working for lower wages without paying taxes, or both. Since workers do not report underground earnings, they can double up on both wages and welfare benefits.

A 1996 GAO report estimated that about 59 percent of Puerto Rican workers would qualify for the EITC.[5] However, with only about 38 percent of its working-age population employed in jobs in the formal economy, access to the EITC would be significantly limited and the benefits misappropriated. The 38 percent of Puerto Ricans who have jobs in the formal economy are not the ones most in need of help. The 62 percent of Puerto Rico’s working-age population who are unemployed, working in the underground economy, or living on welfare benefits are the ones who need greater opportunities for work. Anyone with a formal job in Puerto Rico makes at least $7.25 per hour (the federal minimum wage), which is equal to 77 percent of the island’s median wage.[6]

A Puerto Rican couple with two children and one earner making the median wage of $9.42 per hour[7] (just under $20,000 per year) would qualify for $5,572[8] in EITC payments and $2,000 in CTC payments, effectively increasing their income by $7,572 or nearly 40 percent.[9] These tax subsidies are calibrated to mainland wages and price levels. At the island’s wage levels, the subsidy would miss those it was intended to help—those at the margins of the workforce—and heavily subsidize those who are already in the middle of the distribution.

A similar family with $10,000 in off-the-books earnings or one in which both parents are unemployed would not receive anything from the CTC or EITC. Moreover, as long as their jobs remain barred from benefit by the minimum wage, they cannot choose to move into the formal sector. The EITC subsidizes earnings for families with incomes as high as $53,495, which is more than the income of approximately 85 percent of Puerto Rican households.[10]

Rather than higher paying jobs for a select few who are already better off than most Puerto Ricans, the federal government should exempt Puerto Rico from the federal minimum wage. The Puerto Rican government should do its part as well by eliminating costly and onerous labor-market regulations such as mandatory Christmas bonuses, excessive paid leave, and the inability to fire workers without significant costs. These regulations make it difficult for Puerto Rico to attract businesses that will employ workers and contribute to their economic output and tax revenues. Without new businesses and jobs, Puerto Rico cannot emerge from its economic and financial crisis.

The purpose of the EITC is to encourage unemployed individuals, those working less than full-time, and those receiving welfare benefits to work or work more. The wage subsidy that the EITC provides raises the effective wages individuals can earn by as much as 45 percent. As a result, the EITC can boost the incomes of workers with three or more children by as much as $6,269.[11] As individuals earn more, however, and the EITC is phased out, it acts as an additional marginal tax of up to 21 percent.

Higher wages through the EITC can increase work effort and make individuals less dependent on other welfare benefits. In Puerto Rico, however, the excessively high federal minimum wage would prohibit those most in need from receiving the EITC. Some have argued that, in Puerto Rico, the EITC could help bring workers out from the underground economy and into formal jobs where they both pay Puerto Rican taxes and receive worker protections. While it is hard to measure the underground economy, estimates suggest Puerto Rico’s informal economy accounts for 23 percent to 28 percent of its gross national product (GNP).[12]

However, because the minimum wage is such an impediment to formal employment in Puerto Rico, the EITC would have limited impact. Even if informal workers want to transition to the formal economy and earn higher wages from the EITC, most employers in the underground economy cannot afford to bring their workers’ wages up to the federal minimum necessary to be on the books.

Presumably, the IRS would have to rely on Puerto Rico’s Treasury Department, or “Hacienda,” to implement and enforce the EITC. However, Puerto Rico’s tax administration is abysmal as the island collects only a little over half of its applicable taxes.[18] If the government enforces little more than half the taxes that go into its own coffers, it is even less likely to properly administer and enforce tax credits that cost the Puerto Rican government nothing and that could even boost the island’s tax revenues.

Puerto Rico is facing a serious economic and fiscal crisis. Allowing non-taxpayers access to federal tax credits, such as the EITC and CTC, would be a misguided cash bailout. The EITC would flow primarily to relatively privileged Puerto Ricans with jobs in the formal economy, while at the same time failing to increase incomes or opportunity for the island’s many unemployed and underemployed; the CTC would do little more than provide windfall benefits to families with children. Furthermore, extending tax credits that already have excessively high improper payment rates to territories that do not pay or file federal income taxes—to be administered by a tax administration that only collects about half its own taxes—will lead to high rates of fraudulent payments and excessive costs for federal taxpayers.

Eliminating the federal minimum wage, which restricts potential businesses from locating on the island and pushes others into underground operations, would do far more to boost Puerto Rico’s economy and growth potential than the federal EITC. With a minimum-wage exemption, Puerto Rico could implement its own wage subsidy targeted to very low earners. This would help bring more workers into the formal economy where they will pay taxes and help boost Puerto Rico’s revenues. Congress can also help Puerto Rico grow by providing it with an exemption from the maritime Jones Act, which drives up shipping and production costs, and by granting the island more flexibility in how it administers some federal welfare benefits so that they do not discourage work.

[4] According to the World Bank, Puerto Rico’s labor force participation rate among its working-age population (15–64) was 50.2 percent in 2013. Assuming Puerto Rico’s working age population has the same unemployment rate as the island average of 12.2 percent, only 38 percent (50.2–12.2 = 38) of its working-age population has a job in the formal economy. The World Bank, Labor Force Participation Rate (percent of total population ages 15–64), http://data.worldbank.org/indicator/SL.TLF.ACTI.ZS?page=1 (accessed March 17, 2016).

[10] According to a presentation based on U.S. Census Bureau data for Puerto Rico, 83.9 percent of all Puerto Rican households had incomes of $50,000 or less in 2012. Given the island’s low wage growth and population exodus since then, it is likely that at least 85 percent of all households have less than the maximum EITC-allowable income of $53,495. Enrique Lamas, “U.S. Census Bureau Population Data for Puerto Rico,” Population Studies of Puerto Rico Conference, November 15, 2013, http://www.estadisticas.gobierno.pr/iepr/LinkClick.aspx?fileticket=DhUavOY-CBE%3D&tabid=104 (accessed March 15, 2016).

[15] The ACTC is the refundable portion of the CTC.