Today, You Pay Your Federal Taxes. Tomorrow Is the Real Tax Freedom Day.

Today, You Pay Your Federal Taxes. Tomorrow Is the Real Tax Freedom Day.

This year, Tax Freedom Day—the day after which Americans have worked enough days of the year to pay their taxes—occurs just one day after Tax Day, April 15, the deadline for filing federal tax returns.

That’s according to the Tax Foundation’s annual “Tax Freedom Day” report for 2019.

In total, the report estimates, Americans will work for 105 days of the year to pay their collective $5.42 trillion tax bill—a figure equal to about 29% of Americans’ incomes. 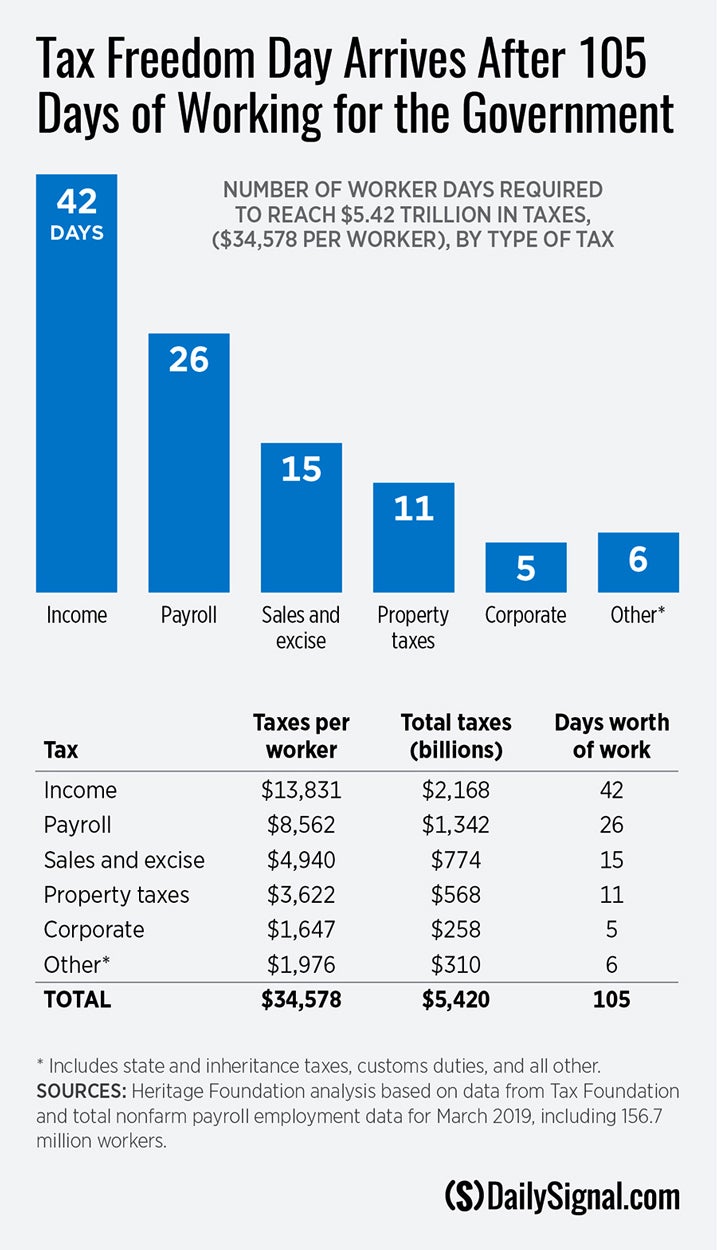 As high as $5.42 trillion or about $34,600 per worker is, it’s not enough to actually pay for what the government spends. To also cover the federal government’s estimated $897 billion deficit for fiscal 2019, Americans would actually have to work until May 8. That’s 22 days longer.

If workers actually had to pay for the full cost of government, the average tax bill would be about $5,700 higher, at about $40,300 per worker.

Instead, current policy is to continue passing those additional taxes onto future workers—making them work even longer to pay for government services they didn’t receive.

So, how does this year’s Tax Freedom Day compare with previous years?

As a result of the Tax Cuts and Jobs Act, 9 out of every 10 taxpayers received a tax cut, and compared with 2017—the last year before tax reform was enacted—Tax Freedom Day is five days earlier in 2019.

According to The Heritage Foundation’s analysis of the effect of the Tax Cuts and Jobs Act across congressional districts, the average taxpayer received a tax cut of about $1,400 in 2018.

Even with those tax cuts, however, Tax Freedom Day is still later this year than it has been in all but about a dozen years over the history of the U.S.

The latest-ever deficit-inclusive Tax Freedom Day occurred in 1945 during World War II, when Americans worked until May 25 to cover total government spending.

This year’s May 8 deficit-inclusive Tax Freedom Day—occurring absent a war and amid significant economic growth—is alarmingly close to that record deficit.

While Americans can celebrate a significant decline in income taxes this year due to the Tax Cuts and Jobs Act, total taxes remain high.

At $5.42 trillion, Americans spend more on taxes than they do on food, clothing, and housing combined. That burden will only increase as government spending continues to grow.

Moreover, the federal debt and its current trajectory is arguably the biggest threat to freedom, opportunity, and prosperity in America.

That doesn’t have to be the case, and The Heritage Foundation has proposed a federal budget—the “Blueprint for Balance“—that includes more than 180 recommendations that would balance the budget within the next decade by focusing federal spending on core constitutional functions and by reducing waste, inefficiency, and cronyism.

Enacting those reforms would shift Tax Freedom Day much earlier in the year. For workers, that would mean less time working to pay the government and more freedom and opportunity to provide for their own well-being and pursue their own choices.