The Truth About How Much Americans Are Paying in Taxes

The Truth About How Much Americans Are Paying in Taxes

Adam N. Michel focused on tax policy and the federal budget as a Senior Policy Analyst in the Grover M. Hermann Center.
Copied

As Americans file their taxes this April, they might be in for a surprise: Most Americans got a tax cut last year.

It shouldn’t be a surprise given the Tax Cuts and Jobs Act of 2017, but unfortunately, the media has produced a never–ending deluge of misleading or inaccurate reporting on the issue.

Last year, The Heritage Foundation studied how the tax cuts would affect Americans in every congressional district across the country. We found that each of the 435 districts got a tax cut and that the average American household paid about $1,400 less in taxes as a result in 2018.

Americans with children also benefit from the tax cuts. A married couple filing jointly with two children saw their tax bills fall by an average of $2,917.

Depending on how much you make, where you live, and how many kids you have, the numbers can look different. You can check out the average tax cut in every congressional district here.

Americans don’t just benefit from the lower taxes. They benefit a second time from higher wages generated by a faster-growing economy. Lower taxes for businesses and individuals help fuel more investment and innovation, which means more jobs and higher wages.

Average tax cuts can be a bit abstract and can seem too good to be true, so we crunched the numbers for specific taxpayers. Here are two examples. 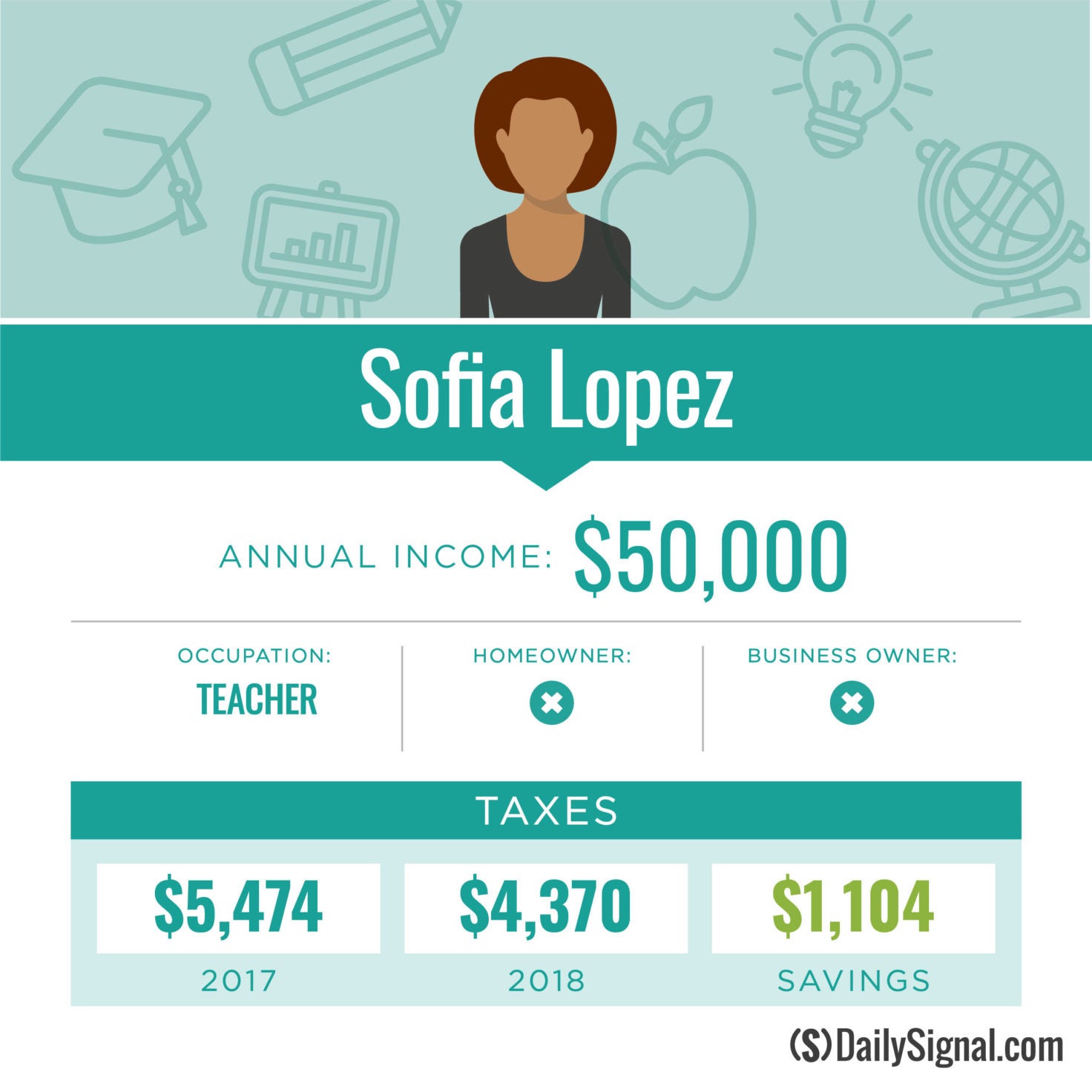 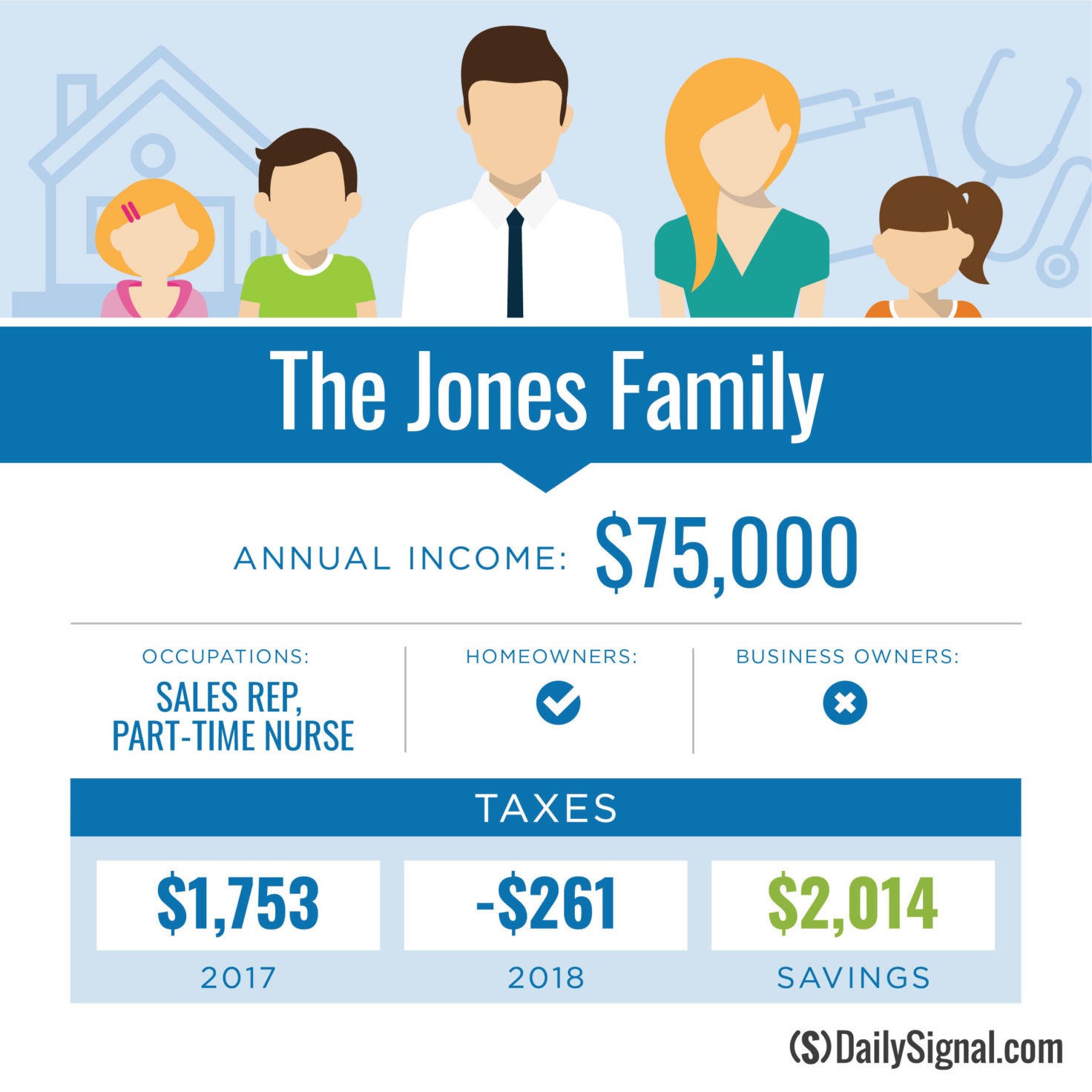 Under the old tax code, John and Sarah Jones—a married couple with combined earnings of $75,000, three children and a home mortgage—paid $1,753 last year. They just finished filing their taxes, and this year their federal income tax bill will decline by $2,014. In fact, because of the larger $2,000 child tax credit, they will get a refundable credit of $261.

As a result of tax reform, 9 out of 10 taxpayers got a tax cut, which most Americans received through lower employer withholding.

Even if most people got a tax cut, some people are concerned that their tax refunds might be smaller after initial reports showed that some refunds could be smaller than in previous years.

The key to remember here is that tax refunds are the government paying you back if you overpaid your taxes throughout the year. They are not related to the size of your actual tax cut. Nonetheless, folks are still rightly concerned about the unanticipated change.

Since the initial reporting, revised numbers now show that average refunds are about the same as last year. Americans likely got a tax cut and still got the refund they were expecting.

Another change that has gotten a lot of negative attention is the capping of the state and local tax deduction (SALT). This cap begins to fix how the deduction that until recently had subsidized unusually high taxes in some states at the expense of federal taxpayers in low-tax states.

After sustained negative press, Ryan C. Sheppard, an accountant at Knight Rolleri Sheppard in Fairfield, Connecticut, recently explained to Bloomberg that “[a] lot of folks are coming in assuming they’re going to lose under the new tax law when in fact, they’re not.” That’s because the cap was paired with new lower tax rates and other reforms, like a larger exemption for the alternative minimum tax.

It has now been more than a year since the tax cuts were signed into law, and many Americans may have forgotten how the law changed.

Here’s a brief summary of the major reforms for individual taxpayers in 2018:

Lower Tax Rates. Tax rates were cut across all seven of the income tax brackets. The top marginal rate decreased from 39.6 percent to 37 percent. The marginal rate for a single earner making $50,000 dropped from 25 percent to 22 percent, while the rate for a married couple with $75,000 of income declined from 15 percent to 12 percent.

Bigger Standard Deduction. The amount of income fully exempt from the income tax, called the standard deduction, almost doubled. For married joint filers, the deduction is $24,000; for single filers, it is $12,000. The new larger deduction takes the place of the personal exemption and simplifies tax filing. About nine in 10 taxpayers will simply claim the new standard deduction in 2018 rather than itemize their taxes.

$2,000 Child Tax Credit. The child tax credit doubled from $1,000 to $2,000 per child and begins to phase out at almost quadruple the income level of $400,000. The new larger credit more than offsets the repeal of the personal exemption for dependents.

$10,000 State and Local Tax Deduction. Taxpayers who choose not to take the standard deduction are able to deduct up to $10,000 of state and local property taxes and income taxes (or sales taxes) paid.

For individuals, the bill also expanded 529 college savings accounts to K-12 expenses, limited the mortgage interest deduction for new mortgages, zeroed out the individual mandate tax, raised the death tax exclusion, eliminated the phase-out of itemized deductions, and increased the exemption for the alternative minimum tax, among many other changes.

But all of the individual tax cuts expire after 2025 and will need to be extended. Otherwise, Americans will face steep tax increases down the road.

Taken as a whole, these changes simplified taxpaying for typical American taxpayers and cut their taxes by thousands of dollars. Thanks to tax reform, paying taxes this year will be less painful than last year.