How Tax Reform Would Simplify Taxes for Tens of Millions

How Tax Reform Would Simplify Taxes for Tens of Millions

Lawmakers have long championed a system that allows Americans to fill out their tax returns on a postcard.

The Tax Cuts and Jobs Act proposed by Republicans in Congress could help turn that vision into a reality for most Americans.

The U.S. tax code imposes a huge burden on Americans, and not just in terms of the taxes they pay. The current system is so tortuous and complex that most Americans pay an accountant or buy tax software to help them file their taxes each year.

Typical tax software costs about $50 to $100, and the CPA Practice Advisorestimates that the average taxpayer who itemizes will pay about $275 in tax preparation fees. Those costs may not seem terribly high, but multiply it by roughly 150 million taxpayers and we’re talking about tens of billions of dollars just in tax-filing fees.

Other compliance costs, including time, raise the tax burden even higher.

About 46 million taxpayers (30 percent) itemize their taxes each year, meaning they have to keep track of things like mortgage interest, medical expenses, charitable donations, and sometimes even the sales taxes they pay on hundreds or thousands of purchases throughout the year.

Even some people who don’t end up itemizing needlessly keep track of these deductible expenses because they don’t know if it will be advantageous for them to itemize or not.

By doubling the standard deduction, partially or fully eliminating the state and local tax deductions, and removing other deductions, the proposed plans would cut the number of taxpayers who itemize by more than half, saving between 21 and 28 million Americans the hassle of keeping track of and itemizing their deductions.

We estimate that doubling the standard deduction alone would reduce the percentage of taxpayers who itemize from 30 percent to 16 percent. Fully eliminating state and local tax deductions (as the Senate’s version does) would further cut the percentage of itemizers down to under 14 percent. 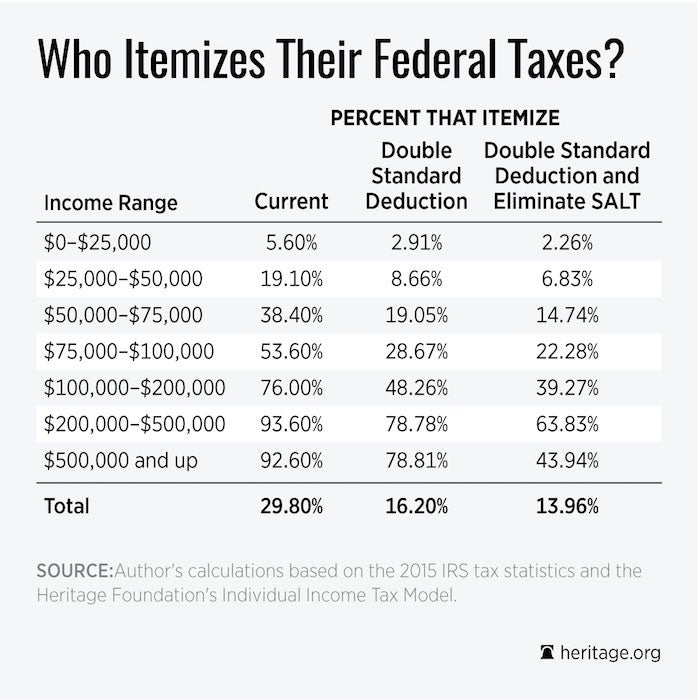 While all income groups would be less likely to itemize their deductions, doubling the standard deduction would generate the biggest reduction in the number of lower and middle-income taxpayers who itemize.

Getting rid of the state and local tax deduction, on the other hand, would greatly reduce the number of high-income taxpayers who itemize.

Doubling the standard deduction and erasing lots of problematic deductions and exemptions would make tax filing easier for tens of millions of Americans. Lower taxes for most taxpayers would also put a big chunk of change back into most Americans’ pockets.

Tax simplification and tax reduction are two undeniable benefits that would come from the proposed GOP plan.

Trump Considers a Cut in the Capital Gains Tax