Lower- and middle-income workers pay for the expensive European welfare state through high taxes on wages and consumption.

The 2017 tax cuts put more money back in the pockets of American workers, expanding the advantage Americans have over similar European workers. 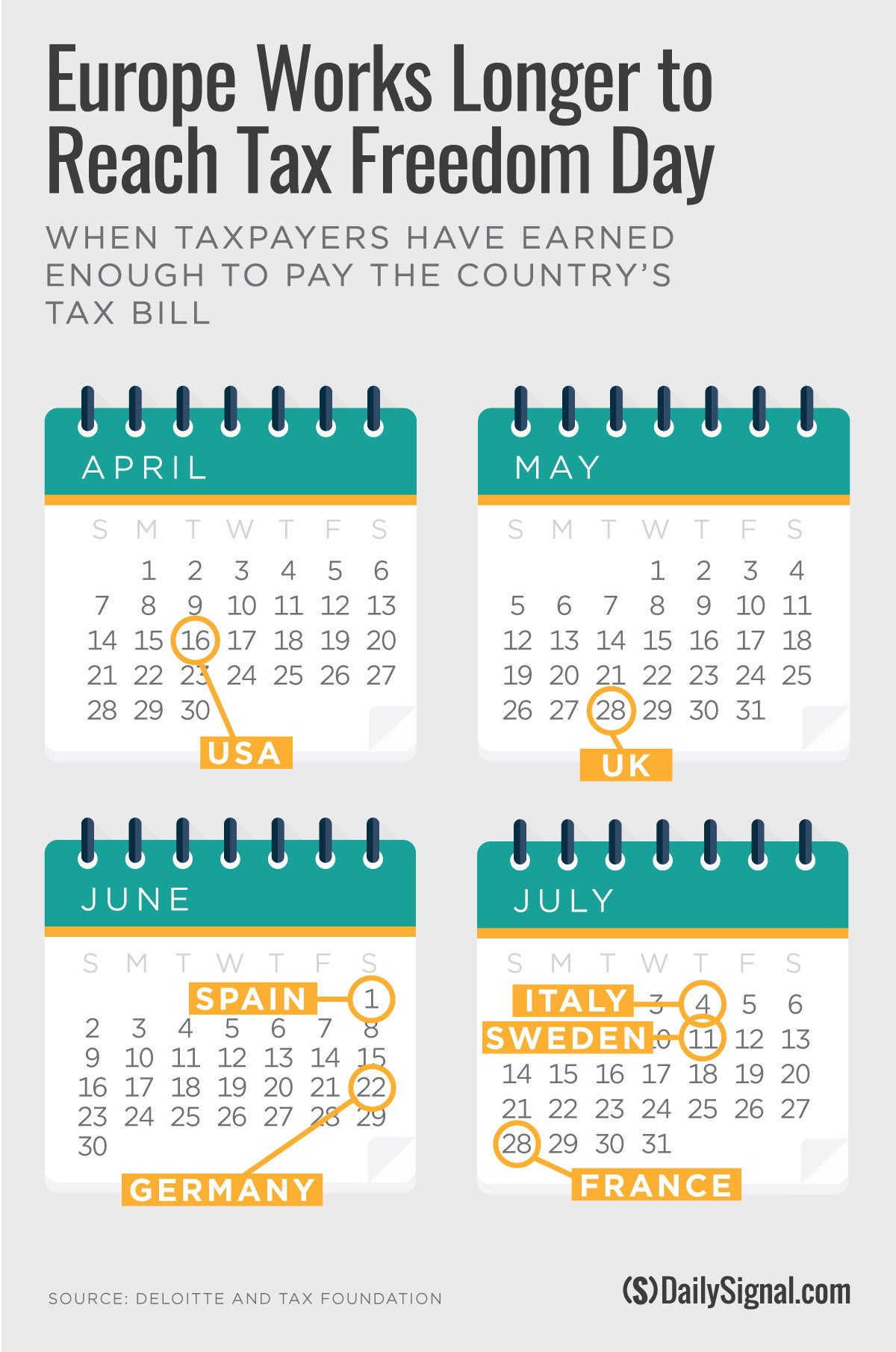 Germany is not alone in Europe when it comes to high taxes. European workers have to work on average more than two months longer than Americans to pay the taxman. In France, they have to work for more than half the year, twice as long as Americans.

The United Kingdom has one of the lower tax burdens in the European Union, but its Tax Freedom Day still comes 43 days after America’s. Even Canadian workers have to work 60 days more than their American neighbors to pay off the nation’s taxes.

The reason these countries have such high tax burdens comes down to one policy choice: expansive government welfare systems.

A large welfare state is increasingly popular among American voters. Presidential candidates on the left almost universally have endorsed some version of “Medicare for All,” free college, a Green New Deal, paid family leave, and other expensive government programs.

We are told not to worry about the cost. The rich will pay for all the new spending. But popular proposals, such as a financial transactions tax, a 70% top tax rate, or a wealth tax would raise only about 6% of their proposed spending.

In Europe, it’s not the rich who pay for these programs. Lower- and middle-income workers pay for the expensive European welfare state through high taxes on wages and consumption.

Workers in Europe making two-thirds their country’s average wage—the equivalent of $37,000 a year—pay a 50% marginal tax on every additional dollar they earn.

If a below-average wage earner gets a raise, the government takes half of every additional dollar. That same worker also has to pay a 20% value-added tax—EU-style sales tax—when they spend whatever income they are allowed to keep.

A $37,000 salary is not wealthy based on American or European standards. In the U.S., that same taxpayer is charged a 32% marginal wage tax and pays only a 6% sales tax on average.

In France, lower- and middle-income workers face some of the highest tax burdens. Marginal tax rates on below-average income earners are 70% in France and they have to work a full three and a half months longer than workers in the U.S. to reach Tax Freedom Day.

High tax burdens have negative effects on the well-being of the country’s citizens. And the programs they fund are less effective at meeting their goals than the private-sector alternatives.

The reason is simple. Private providers have to compete for business by producing value for consumers. Government monopolies can perform poorly and stay in business as taxpayers aren’t given the choice to take their money elsewhere.

High taxes and generous government-provided benefits reduce the value people gain from working harder to get a promotion or pay raise because they know the government will take half their new income.

When you don’t benefit from the fruits of your own labor, there is less incentive to start your own business or be an entrepreneur. High taxes facilitate a culture of complacency.

Americans should be thankful they do not have to work as long as their European counterparts to pay the nation’s tax burden.

When candidates talk about increasing spending, U.S. taxpayers should understand that big government is expensive and must be paid for by all taxpayers, not just the rich.

The 2017 tax cuts put more money back in the pockets of American workers, expanding the advantage Americans have over similar European workers.

The Heritage Foundation’s 2020 “Blueprint for Balance” adopts spending controls and entitlement reforms to balance the budget in 10 years and make the 2017 tax cuts permanent.

Following this roadmap would prevent European-style tax burdens on Americans in the years to come, securing opportunity and prosperity for this generation and the next.

Remote Workers Could Get Surprise Tax Bills, But States Can Protect Them