In 1 Graphic, Here’s What Uncle Sam Is Doing With Your Tax Money

In 1 Graphic, Here’s What Uncle Sam Is Doing With Your Tax Money

The average American household sends more than $20,000 to Washington in tax revenue each year, and most see little in return.

Combined annual spending on health entitlements and Social Security is projected to grow by 89 percent over the next decade.

Washington already takes too much of the money that Americans work hard to earn. Congress must rethink how it is spending the people’s money.

Last month rapper Cardi B asked a slightly more profane version of the same question many Americans ask when they file their taxes.

“Uncle Sam, I want to know what you’re doing with my f—ing tax money.”

That’s a good question. The average American household sends more than $20,000 to Washington in tax revenue each year, and most see little in return.

In 2017, the federal government nabbed more than $3.3 trillion in taxes—but that still isn’t enough to satiate Washington’s immense appetite for spending. The 2017 deficit was a whopping $665 billion.

So where do our tax dollars go?

Some believe most of it goes to welfare programs and foreign aid. Others believe defense and corporate subsidies dominate the budget.

In reality, health entitlements—Medicare, Medicaid, Obamacare—and Social Security are the largest programs. If Congress continues its current policies, these entitlements and interest on the debt are set to consume every dollar of taxes paid by 2027. That’s less than 10 years away. 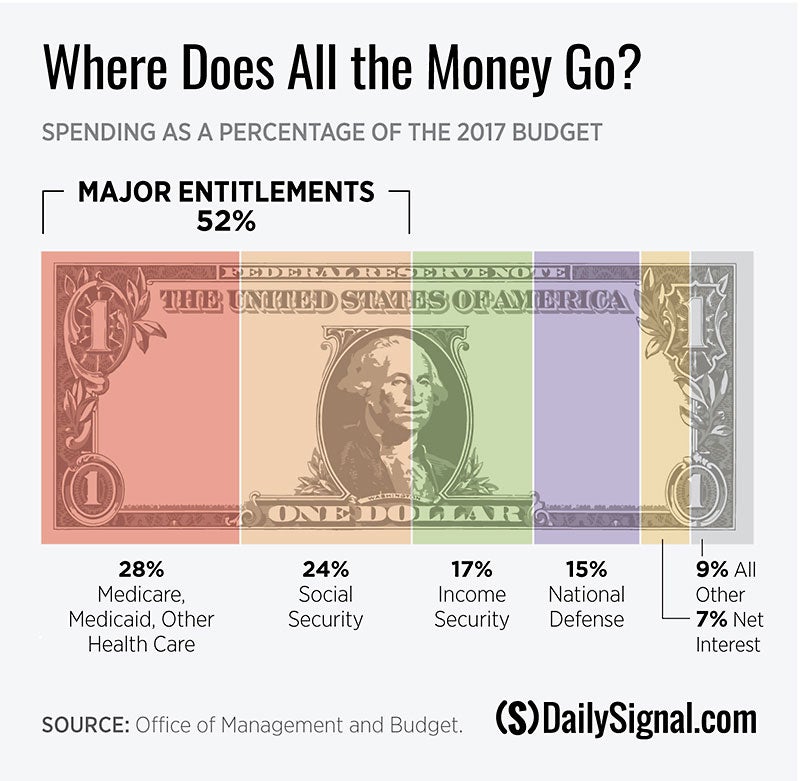 Right now,  federal health programs such as Medicare, Medicaid, and Obamacare subsidies currently consume 28 percent of the budget. Federal health spending is projected to grow on an unsustainable trajectory of 6 percent per year over the next 10 years. That growth rate is about three times the projected pace of economic growth over the same period.

Meanwhile, Social Security, the single largest federal program, accounts for roughly a quarter of all federal spending. Its trust funds are already paying out more than they take in, and as more people retire, the system will face continued stress.

Without reform, the program’s trustees project benefits will need to be cut as much as 23 percent if nothing is done by 2034.

In the meantime, rather than slowing down, spending on all these programs is expected to dramatically increase in the near future. Combined annual spending on health entitlements and Social Security is projected to grow by 89 percent over the next decade.

The defense budget covers everything from military paychecks, to operations overseas, to the research, development, and acquisition of new technologies and equipment.

Well, interest on the debt is one big culprit.

Over the coming decade, U.S. debt held by the public is projected to balloon to over 96 percent of gross domestic product—driven primarily by health and Social Security spending. As the size of the debt grows, so will the interest costs.

Currently, 7 percent of the budget is spent on interest—money that takes away from other priorities. But in just five years, interest spending is projected to exceed national defense.

Deficit spending has many costs. Economic growth tends to slow in countries with debts that are comparable to the size of the economy, a group the U.S. is quickly joining. As the debt increases, so does the cost of the interest we must pay to those who hold the debt. China is currently the largest foreign holder of U.S. debt.

Without reforming America’s massive and growing federal programs, Washington will have to continue to borrow increasing amounts of money, piling new debt onto younger generations and worsening the nation’s already unsustainable economic course.

Some people will tell you that the recent tax cuts are to blame for our fiscal challenges. However, in 2018, total tax revenue is projected to increase by $22 billion. In dollar terms, tax reform was only a cut in the growth rate of revenue collection and not actually a decrease in total dollars collected by the IRS. By 2025, revenue growth will return to pre-tax reform levels.

The growing deficit is caused exclusively by more spending—every year after 2018, tax revenue is projected to grow faster than the economy.

Growing government spending threatens higher taxes on current and future taxpayers. Without serious spending reforms, taxes will go back up. Congress made much of the tax cuts temporary. After 2025, when many of the tax cuts expire, tax revenue jumps back to its pre-tax reform levels. Eventually, rising debt will leave lawmakers with limited options to avoid a financial crisis. Unless we can reverse course, it is only a matter of time before the taxman comes knocking.

In the words of Cardi B, “What is y’all doing with my f—ing money? I want to know. I want receipts.”

Increasing taxes is not the solution. Washington already takes too much of the money that Americans work hard to earn. Congress must rethink how it is spending the people’s money.