The U.S. Should Push for Fundamental Changes to the United Nations Scale of Assessments

The U.S. Should Push for Fundamental Changes to the United Nations Scale of Assessments

Every three years, the member states of the United Nations negotiate how to apportion the expenses of the U.N. regular budget and the peacekeeping budget. These negotiations center on the U.N. “scale of assessments,” which assigns a specific percentage of the budgets to each member state, broadly based on its capacity to pay as calculated from its gross national income (GNI), modified by various factors.[1] The current system is based on a methodology that results in a handful of states footing the lion’s share of U.N. costs, with a disproportionately limited ability to shape the budget. This tilted system has undermined efforts to reform the U.N. to improve efficiency, transparency, and accountability.

The U.N. Committee on Contributions, the body of experts charged with analyzing the scale of assessments and its various criteria and elements, is meeting from June 1 to 26 to recommend adjustments for the General Assembly to consider in the fall. The U.S. has a representative on this committee. The Obama Administration should press strongly at this meeting and during the fall to adjust the scale of assessments for 2016–2018 to spread the financial burden more equitably among the member states and to give large contributors greater influence over budgetary decisions.

The United Nations consists of a complex system of organizations, funds, programs, offices, and other bodies. The “core” United Nations is generally considered to consist of the entities established in the U.N. Charter: the Security Council, the General Assembly, the Economic and Social Council, the International Court of Justice, the largely defunct Trusteeship Council, and the Secretariat. These bodies conduct various activities and oversee a wide array of committees, commissions, and working groups. To fund these activities, the U.N. has two main budgets:

Article 17 of the U.N. Charter states that the “expenses of the Organization shall be borne by the Members as apportioned by the General Assembly.” Since the U.N.’s establishment in 1945, these expenses have been apportioned “broadly according to capacity to pay.”[6] This means that wealthier nations, based principally on the size of their economies and their per capita income level, and adjusted by other factors, are asked to pay larger shares of the budget than poorer nations. This was done in recognition of fiscal reality. The founders of the U.N. did not want U.N. membership to cause severe financial hardship. However, as evidenced from their actions in establishing a minimum assessment of 0.04 percent in 1946, they did not believe that membership should be costless or insignificant either, even though the original member states included very poor countries, such as Haiti.

Over the past six decades, the regular budget assessments provided by poor or small U.N. member states have steadily declined. For instance, the minimum assessment for the regular budget fell from 0.04 percent to 0.02 percent in 1974, to 0.01 percent in 1978, to the current minimum assessment of 0.001 percent adopted in 1998. Additional discounts have also been adopted to reduce the assessments of most nations, including a debt burden discount for countries under a specified income threshold, a low per capita income discount, and a maximum assessment of 0.01 percent for the nearly 50 least-developed countries.[7] 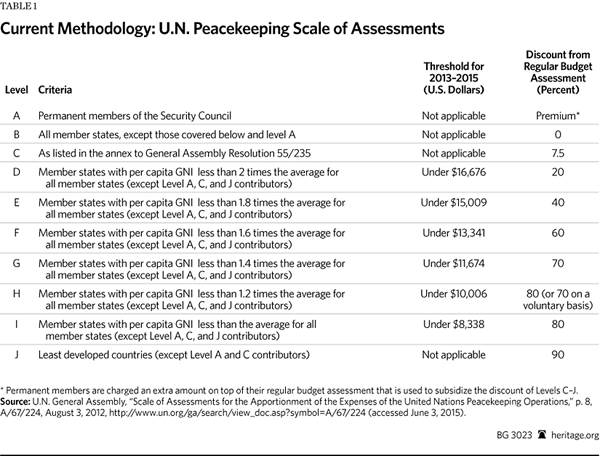 To accommodate these reductions, the minimum peacekeeping assessment was reduced even further below that of the regular budget to 0.0001 percent.[8] These reductions are then added to the assessments of the permanent members of the Security Council as a reflection of “their special responsibilities for the maintenance of peace and security.”[9]

The primary result of these adjustments is a shift of the costs of the organization away from the bulk of the membership to a relative handful of high-income nations, particularly the United States. As presented in Table 2, for the regular budget, the U.S. is assessed more than 176 other U.N. member states combined, and 22,000 times more than the least-assessed countries. These differences are even starker in dollar terms:

This disparity between budgetary authority and responsibility helps explain why so many member states are blasé about increases in the U.N. budget: The financial impact on them is minuscule. This undermines their incentives to fulfill their oversight role and seriously consider budgetary restraint. A long-term means for addressing this problem requires all member states to have financial skin in the game. 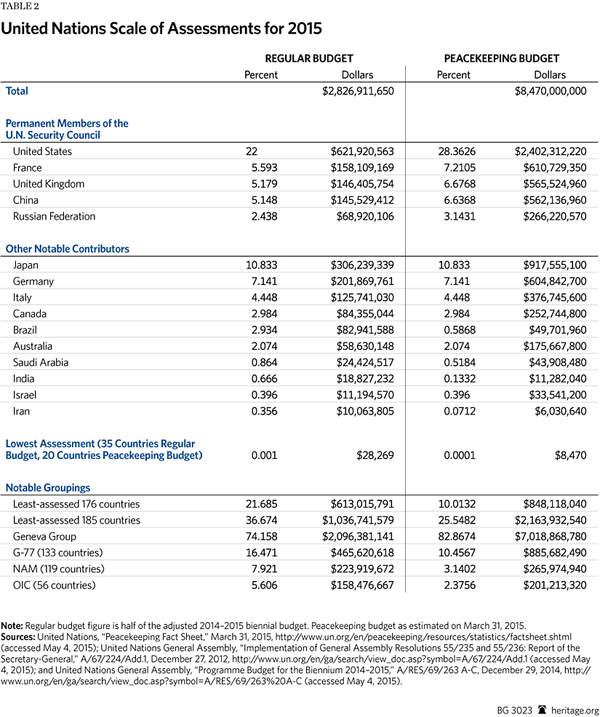 Since the first scale of assessments was proposed in 1946, the U.S. has objected to excessive reliance on a single member state for the budget, arguing for a maximum assessment level and, subsequently, lowering that maximum.[11] Reducing the U.S. assessment is a contentious issue because the scale of assessments is generally a zero-sum game—if America’s assessment is reduced, other member states must increase their own contributions.[12] Nonetheless, the U.S. succeeded in reducing its assessment for the regular budget in roughly a dozen incremental steps from a high of 39.84 percent in 1947. A maximum contribution level was established at one-third of the budget in the 1950s, and was steadily reduced to 25 percent in 1974.

Since the 1990s, the focus of the U.S. efforts has been to reduce its assessment for peacekeeping, which has outstripped the U.N. regular budget in size and resulted in an increasingly heavy financial burden on the permanent members of the Security Council, particularly the U.S.[13] As President Bill Clinton stated before the General Assembly in 1993, “[T]he U.N.’s operations must not only be adequately funded, but also fairly funded.... [O]ur rates should be reduced to reflect the rise of other nations that can now bear more of the financial burden.”[14]

In 1994, President Clinton signed P.L. 103–236, which capped U.S. contributions to U.N. peacekeeping at 25 percent.[15] The discrepancy between this cap and the amount that the U.N. assessed to the U.S. for peacekeeping led to a rapid accumulation of arrears in the 1990s.

This financial stress led the U.N. and the other member states to agree to lower the maximum contribution level for the regular budget assessment from 25 percent to 22 percent in 2001, which was a condition for U.S. payment of arrears under the 1999 Helms–Biden agreement.[16]

As part of the agreement, the U.N. also established a formal methodology for calculating the peacekeeping assessment that was to gradually reduce America’s peacekeeping assessment to 25 percent. Ambassador Richard Holbrooke, who brokered the deal, secured an immediate reduction from 30.2816 percent in 2000 to 28.134 percent in January 2001.[17] He testified that the “U.S. rate will continue to progressively decline, and we expect that it will reach 25 percent by roughly 2006 or 2007.”[18]

Congress accepted Holbrooke’s assurances in good faith and approved payment of the arrears. While Congress maintained the 25 percent cap, it approved periodic increases to avoid accumulating arrears while the U.N. lowered the U.S. assessment to 25 percent. As illustrated in Table 3, the U.S. peacekeeping assessment did decrease, albeit more slowly than Holbrooke predicted, with the U.S. share falling to less than 26 percent in 2009. In 2010, however, the U.S. assessment rose sharply in the 2010–2012 scales of assessment and again in the 2013–2015 scales of assessment. The U.S. assessment for the peacekeeping budget has risen to 28.3626 percent in 2015.[19] The difference between the 25 percent promised by Holbrooke and the current assessment is small in percentage terms, but has cost U.S. taxpayers hundreds of millions of dollars. 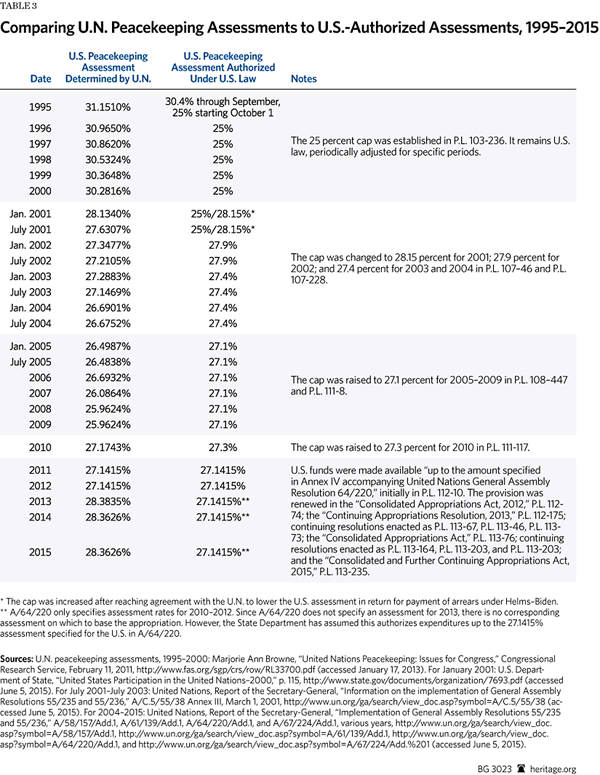 The experience of the past 25 years illustrates that financial leverage can be used as an incentive for the U.N. to change the U.S. assessment and, conversely, that accommodation encourages the U.N. to ignore U.S. calls for lower assessments. The U.S. policy of unilaterally imposing a 25 percent cap on its contributions to peacekeeping and making payment of arrears under Helms–Biden contingent on lower assessments was instrumental in getting the 22 percent regular budget cap and a commitment to lower peacekeeping assessments. The U.N. continued to lower the U.S. assessment when it believed that the U.S. was serious about withholding.

The U.S. sent the opposite signal by increasing the cap from 25 percent to 27.1 percent in 2009 and applying it retroactively through 2005 to allow payment of arrears accumulated during that period. The other U.N. member states interpreted this action as a weakening of U.S. resolve, and, unsurprisingly, increased the U.S. peacekeeping assessments in 2010 and again in 2013.

Under the current formula, and, as illustrated in the appendix, unless changes are made, U.S. peacekeeping assessments are likely to increase again in the 2016–2018 scale of assessments. Unless the U.S. insists that the U.N. establish a maximum peacekeeping assessment of 25 percent and follow through by refusing to pay above this level, it is very unlikely that it can reverse this trend.

Seven Steps for the U.S.

There are two compelling incentives for the U.S. to take a hard line on demanding more equitable distribution of the costs of U.N. activities. First, when a large number of countries pay de minimis amounts to the U.N. budgets, they have a similarly small incentive to ensure that those funds are used well. Second, Congress and the Administration have a responsibility to be prudent stewards of taxpayer dollars. The failure of the U.S. to secure a 25 percent cap on U.N. peacekeeping has cost the U.S. taxpayer over a billion dollars over the past decade. To address these issues, Congress and the Administration should work together to:

Congress and the Obama Administration have both expressed a desire for the United Nations to be more transparent and accountable and to use its resources more effectively. To accomplish this, U.N. budgetary decision making must be linked to financial responsibilities, the assessment process must be simpler and more transparent, and the disparity in apportionment must be lessened. Major donors must have a greater say in budgetary decisions, and smaller donors must assume financial responsibilities that lead them to make budgetary decisions with the seriousness they merit. The chance to reform the U.N. assessment system arises only once every three years: 2015 is one of those years, and the Obama Administration should not let this opportunity slip away.

—Brett D. Schaefer is Jay Kingham Senior Research Fellow in International Regulatory Affairs in the Margaret Thatcher Center for Freedom, a division of the Kathryn and Shelby Cullom Davis Institute for International Studies, at The Heritage Foundation. He is editor of ConUNdrum: The Limits of the United Nations and the Search for Alternatives (Rowman & Littlefield Publishers, 2009). 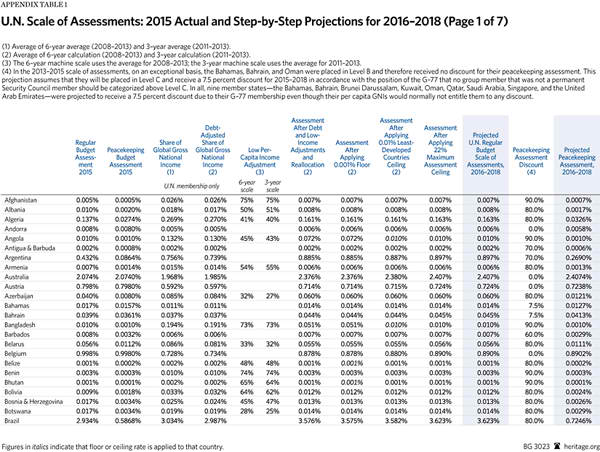 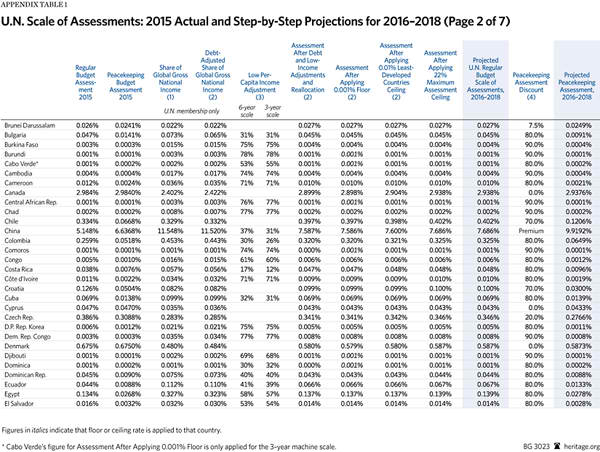 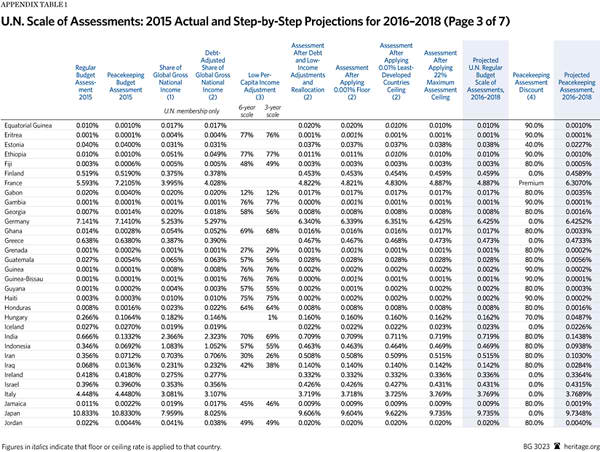 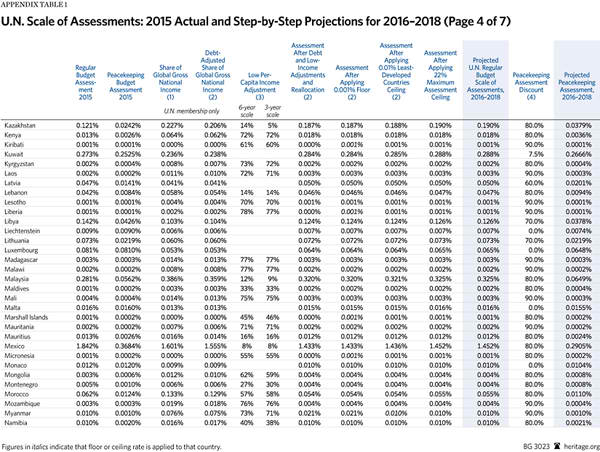 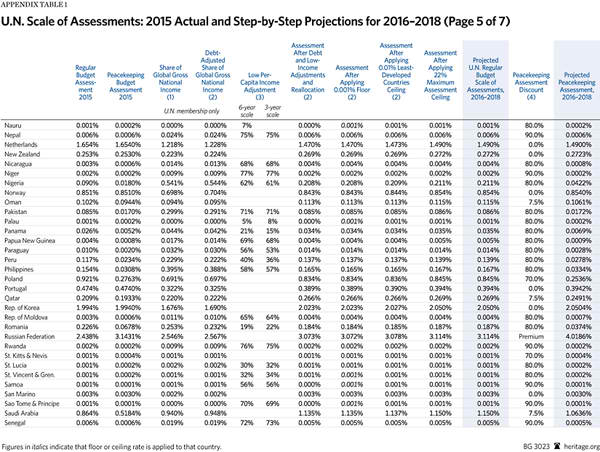 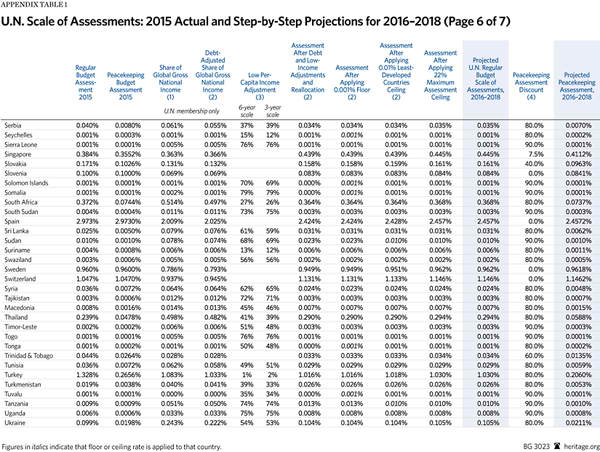 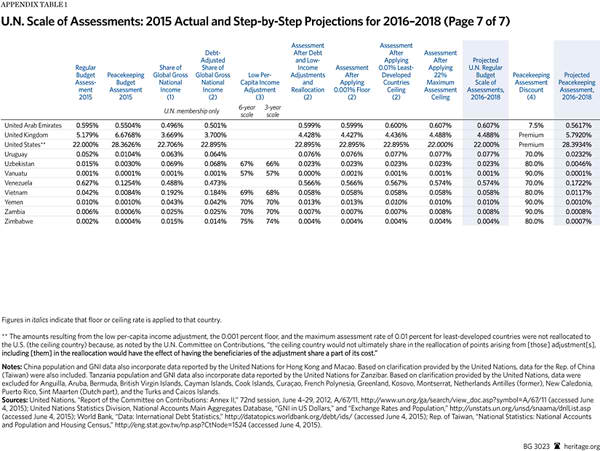 [6] For a detailed history of this practice, see Brett D. Schaefer, “The Window of Opportunity to Overhaul the U.N. Scale of Assessments Is Closing,” Heritage Foundation Backgrounder No. 2701, June 18, 2012, http://www.heritage.org/research/reports/2012/06/the-window-of-opportunity-to-overhaul-the-un-scale-of-assessments-is-closing.

[11] Schaefer, “The Window of Opportunity to Overhaul the U.N. Scale of Assessments Is Closing.”

[12] Unless new countries join the U.N. that can help offset the U.S. reduction. Currently most non-U.N. member states are small or poor and, therefore, would be unlikely to assume significant assessments.

[13] Peacekeeping expenses were originally paid through the regular budget. Disputes in the early 1960s over peacekeeping expenses and sharp political differences over two major U.N. peacekeeping operations—the United Nations Emergency Force (UNEF I) established in 1956 and the United Nations Operation in the Congo (ONUC) established in 1960—led a number of countries to withhold U.N. funding, and instigated an ad hoc peacekeeping-funding arrangement with discounts for developing countries subsidized through higher assessments for permanent Security Council members.

[14] Address by the President to the 48th Session of the United Nations General Assembly, New York, September 27, 1993.

[22] Some may object, claiming that this places a heavy burden on poorer members of the U.N., but seeking a seat on the Security Council is voluntary. Moreover, if a regional group agrees that it is particularly important to have a smaller or poorer country represent the region as a non-permanent member of the Security Council, the group could provide financial assistance to offset this minimum assessment.

[23] The difference can be significant. For the current scale, China’s regular budget assessment was 3.8 percentage points lower than its share of global GNI. When applied to the peacekeeping budget for 2015, this adjustment lowers China’s assessment by over $300 million.