Revisiting the Lessons from the Voter ID Experience in Texas: 2015

Revisiting the Lessons from the Voter ID Experience in Texas: 2015

Since 2013, when its voter ID law was implemented, Texas has conducted one state election (in addition to various local elections and primaries) and one midterm congressional election. In the state election, turnout increased, and while turnout declined slightly in the congressional midterm election—an election in which turnout generally declined across the country—the decline in Texas was less than declines in some states that have no ID requirement.

The Texas law requires in-person voters to present a valid photo ID when voting. Forms of acceptable ID include:

There are several exemptions to the law, including exemptions for individuals who have a religious objection to being photographed, persons who lack ID as a result of a natural disaster, and disabled voters.[3] Voters who are 65 or older can vote by absentee ballot without a photo ID.[4]

Normally, an individual obtaining a certified birth certificate is charged a fee of $2 or $3.[5] However, the Texas Department of State Health Services has waived most of the fees for obtaining a birth certificate that may be needed to get a free voter ID—the Election Identification Certificate (EIC).[6] In addition, on May 27, 2015, the Texas governor signed into law a bill, passed unanimously by the state legislature, that eliminated all fees associated with obtaining any state records needed as supporting documentation to get an EIC.[7]

A “primary” ID is a Texas driver’s license or personal ID card issued by the DPS that has been expired for less than two years.[9] “Secondary” IDs include a birth certificate, a U.S. Department of State certification of birth, a court order that records a change in name or gender, and citizenship or naturalization papers without a photo.[10]

Texas recognizes 28 types of “supporting identification,” including voter registration cards, school records, insurance policies, military records, Social Security cards, W-2 forms, Medicare or Medicaid cards, immunization records, tribal membership cards, and government agency ID cards, among others.[11] It is improbable that any Texas resident could credibly claim not to have access to at least some of these documents.

Finally, Texas provides a provisional ballot to any voter who comes to a polling place without an ID.[12] In such a scenario, the precinct election official is required to give that voter written information that describes the ID requirement, the procedure for presenting an ID, a map showing the location where an ID can be presented, and notice that if these procedures are followed within six days after the election, the vote will count.[13]

Given how easy it is to obtain a voter ID for the few individuals in Texas who do not already have one, it should come as no surprise that turnout does not seem to have been adversely affected by the new law. In fact, there are so few Texans who do not already possess a photographic ID that as of April 17, 2015, the Texas Department of Public Safety reported that “fewer than twenty individuals statewide have been issued an EIC.”[14]

Although the Texas voter ID legislation was passed in 2011, as a result of an objection filed by former U.S. Attorney General Eric Holder under Section 5 of the Voting Rights Act, the law was not in effect for the 2012 presidential election.[15] However, that objection became moot in 2013 when the U.S. Supreme Court held in Shelby County v. Holder that the coverage formula for Section 5, which dictated the state’s inclusion under the Section 5 preclearance regime, was unconstitutional.[16] Thus, the law was in effect for the Texas constitutional state election in November 2013 and the midterm congressional elections in 2014.

Statewide turnout among registered voters for the 2013 constitutional election in Texas was 8.55 percent (1,149,337 voters)—a number remarkably higher than the turnout in 2011, which was only 5.37 percent (690,052 voters) of registered voters. The turnout of the voting-age population in 2013 was 7.93 percent, compared to only 3.77 percent in the 2011 election. It is hard to equate a doubling of the percentage increase in voter turnout with any form of voter suppression, particularly when the Census estimates that there was only a 5.2 percent increase in the total Texas population from April 1, 2010, to July 1, 2013.[18]

Some counties with large minority populations like Webb County and Hidalgo County, which are 95 percent and 91 percent Hispanic, respectively, had even bigger increases in turnout.[19]

In the 2010 midterm congressional election, one year before Texas passed its voter identification law, the turnout of the Voting-Eligible Population (VEP) in Texas was 32.1 percent.[20] In the 2014 midterm congressional election—conducted with the ID requirement in place—the VEP turnout was 28.3 percent, a slight decrease of 3.8 percentage points in a year in which Texas did not have a competitive statewide race. In the same two elections, the VEP turnout for the United States as a whole fell 5.0 percentage points, so the decline in turnout in Texas was actually less than the overall national decline in turnout.[21]

It should be noted that while the original objection by former Attorney General Holder was mooted by the Shelby County decision, an injunction against the Texas ID law was issued on October 9, 2014, by a federal district court judge in Corpus Christi.[24] However, the Fifth Circuit Court of Appeals issued a stay and lifted the injunction, leaving the voter ID requirement in place for the 2014 and subsequent elections, although the judgment against Texas remains on appeal before the Fifth Circuit.[25] 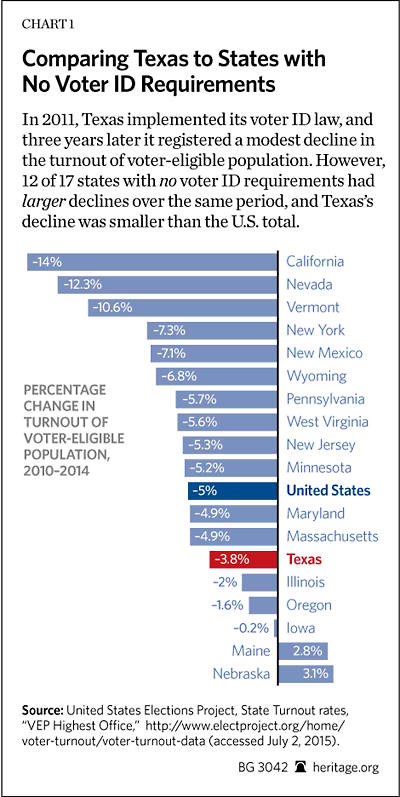 As Texas pointed out in its brief in the Fifth Circuit, the Justice Department and other advocacy organizations involved in the lawsuit “crisscrossed Texas” with a “microphone in hand, searching for voters ‘disenfranchised’” by the voter ID law without success.[26] The judge claimed the voter ID law had a racially discriminatory purpose but admitted that there were “no ‘smoking guns’ in the form” of any racist or even racially tinged remarks by any of the sponsors of the ID bill.[27]

Apparently, the judge made this assumption based on her belief that voter ID is not justified as a matter of policy—a conclusion with which the U.S. Supreme Court disagreed in Crawford v. Marion County[28]—and because two Democratic opponents of voter ID claimed, without offering any supporting evidence, that the legislative session in which the law was passed was a “racially charged environment.”[29] In the same decision the judge held that any effort to “abolish sanctuary cities” in Texas—to refuse to allow cities to violate federal immigration laws—was a sign of “anti-Hispanic sentiment” as opposed to an effort by legislators to have local officials comply with federal law.[30]

The Effects of Voter ID

Contrary to the claims made by opponents, there is no evidence that implementation of a voter ID law in Texas has had any effect in suppressing voter turnout across the state. In the 2013 state election, turnout increased—despite the enactment of the new voter ID requirement. Likewise, during the 2014 midterm elections—a contest that saw voter participation plummet across the U.S.—turnout in Texas declined at a smaller rate than the national average[31] and a smaller rate than the rate in 12 states that have no ID requirement.

—Hans A. von Spakovsky is a Senior Legal Fellow and Manager of the Election Law Reform Initiative in the Edwin Meese III Center for Legal and Judicial Studies at The Heritage Foundation. He is a former commissioner on the Federal Election Commission and counsel to the Assistant Attorney General for Civil Rights at the U.S. Department of Justice and the coauthor of Who’s Counting? How Fraudsters and Bureaucrats Put Your Vote at Risk (Encounter, 2012) and Obama’s Enforcer: Eric Holder’s Justice Department (HarperCollins/Broadside, 2014). Rachel S. Landsman, a member of the Young Leaders Program at The Heritage Foundation, provided valuable research assistance for this paper.

[20] The Voting-Eligible Population is the voting-age population minus all individuals of voting age who are ineligible to vote, such as noncitizens and felons. VEP is usually the most accurate measure of turnout. The VEP numbers used in this paper are the “VEP Highest Office” turnout rates from the United States Election Project. See United States Election Project, University of Florida, website, http://www.electproject.org/home/voter-turnout/voter-turnout-data (accessed June 9, 2015).

[31] It should be noted that while turnout was generally down nationally, “14 states had higher turnout compared with the 2010 midterms. All featured highly competitive governor’s races or figured in the battle for Senate control, which brought a deluge of outside spending on TV ads and intense news coverage.” Gabriel and Fernandez, “Voter ID Laws Scrutinized for Impact on Midterms.”